Spot rates from the Far East to the US West Coast continue to fall quickly, dropping by more than USD 500 per FEU on 1 October as rates for the new month replaced those valid in September.

On 5 October, the average spot rate from the Far East to the US West Coast stood at USD 3 000 per FEU. This collapse in the spot rates means shippers can now move three 40” containers for what they paid just a few months ago for a single box. We only have to go back to May to find rates above USD 9 000 per FEU.

Spot Rates From Far East to the US West Coast

Comparing to today’s long-term market on this transpacific trade, where shippers on the spot market can get two boxes moved for the price of only one on the long-term market. The average long-term rate for contracts signed in the past three months is over USD 7 500 per FEU.

At USD 3 000 per FEU, the average spot rate has fallen to its lowest level since July 2020, with October being the first month since rates rocketed upwards that the spot market average has been lower not only than the same month last year but also than in October 2020. Compared to October 2019, the current spot rate is more than double at USD 1 700 per FEU higher. 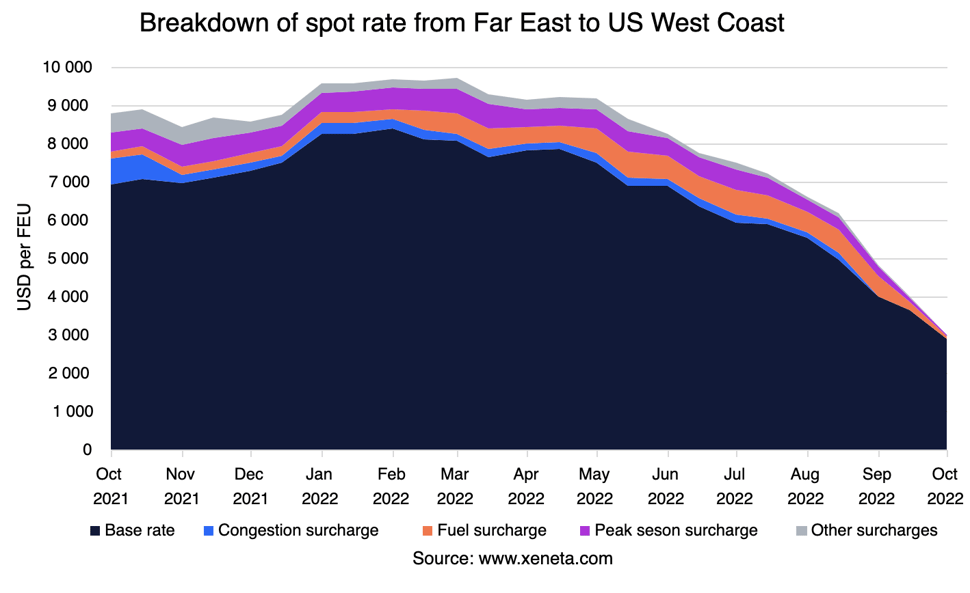 Over the past year and a half, changes in the base rate have not reflected the full increase in the price being paid by shippers as surcharges have shot upwards, increasing the total rate as benchmarked by Xeneta (though premium surcharges were never included). On the way down, we are again seeing surcharges falling faster than the base rate.

For example, the average congestion and peak season surcharges in these spot market contracts have fallen to just a couple of dollars (around USD 6 per FEU), compared to their average on 1 October of USD 680 per FEU and USD 490, respectively.

The container market is no walk in the park. You need to have the latest rate and supply data to be able to plan and execute your freight procurement strategy quickly. Xeneta's real-time and on-demand data is here to help you answer, "Am I paying the right freight rate to get my cargo where it needs to be?"