The recent trend of globally falling spot freight rates has brought transport costs back on par on the main transpacific corridors of containerized exports from APAC to the US West Coast.

In the early days of 2021, the relationship that was usually separated by little more than USD 100 per FEU began to split up.

It was a slight change at first, but as the pandemic continued to wreak havoc on all trade lanes in May 2021, it became more expensive to ship out of Asia from any non-China origin - in South East Asia as well as in North Asia.

APAC exports to US West Coast

One year ago, by mid-September 2021, the price spread peaked at USD 3 800 per FEU but has now fallen back to zero in 2022. Moreover, the spot freight rates are currently down to their lowest level since April 2021. 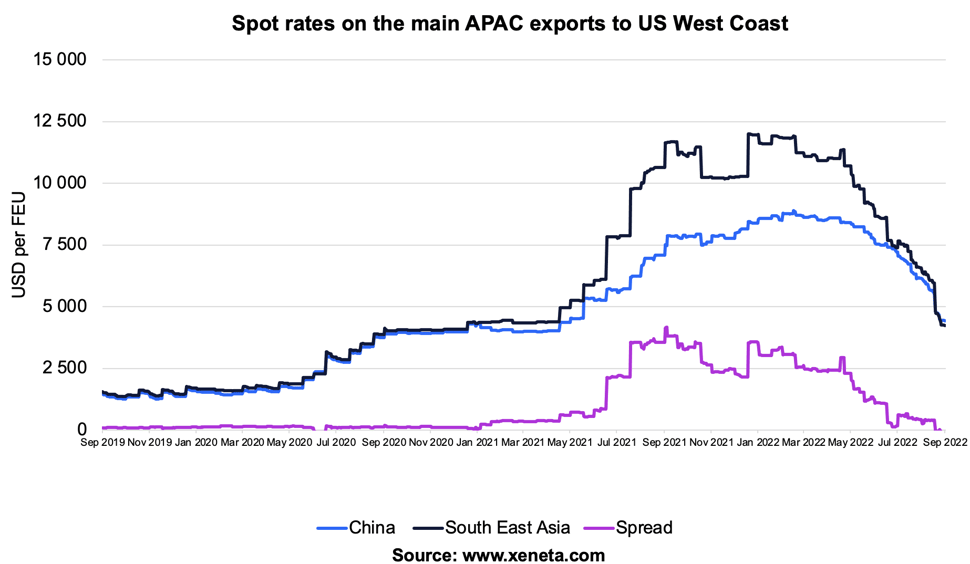 Spot rates from South East Asia to the US West Coast peaked at just under USD 12000 in January 2022, whereas those from China ‘only’ got to USD 8 700 and peaked in March.

Since then, the fall in rates out of South East Asia has also been faster than those out of China - the key to bringing the spread down. Since the end of March, rates from South East Asia to the US West Coast have fallen by 62%, while those from China are down 49%.

Currently, the average spot rate to the US West Coast from the Far East and South East Asia is USD 4 300 per FEU, with China slightly more expensive.