In contrast to spot rates on the Far East to North Europe trade which have fallen by more than USD 3 600 per FEU since the start of the year, those to the Mediterranean have seen a much smaller decline, falling by just USD 850 per FEU.  The spot rate from the Far East to the Mediterranean stood at USD 13 100 on 26 April, whereas the spot rate to North Europe was USD 11 100 per FEU.

This in turn means that it is now USD 2 000 more expensive to get a 40’ container to the Mediterranean compared to North Europe when importing it from the Far East, a turnaround since the middle of 2021 during which North Europe was the most expensive option.

At the start of the year importing to the Mediterranean was USD 850 per FEU less expensive, encouraging some shippers to consider shifting their imports to Mediterranean ports for onwards transport on land -  an option now far less attractive given the fall in spot rates to North Europe. 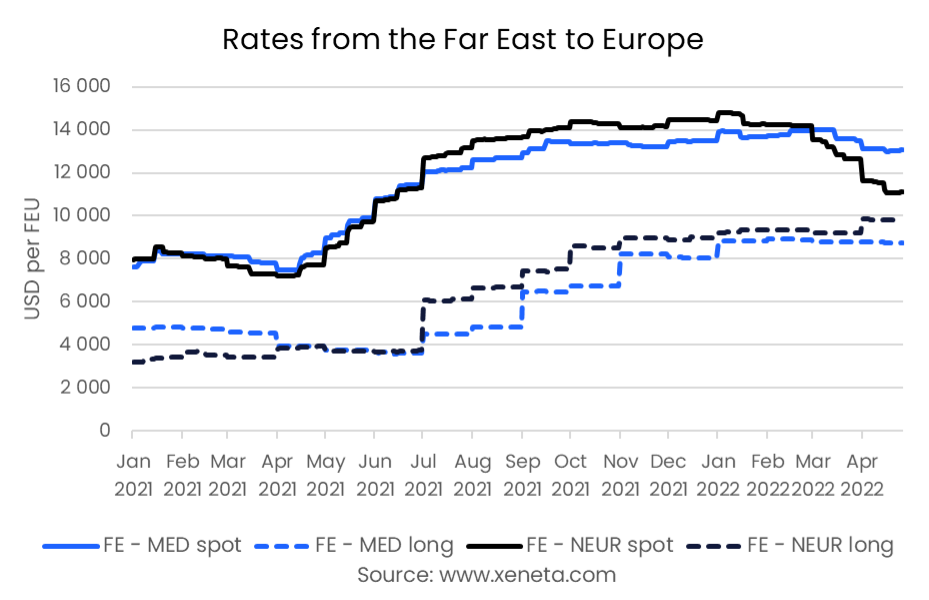 Historically, spot rates for the two had followed each other closely and followed the same upward trend when the spot market took off in Q2 2021. Rates to North Europe then rose to a higher level, enjoying a premium over rates to the Mediterranean between July 2021 and March 2022. Since then, North Europe has traded at a growing discount compared to the Mediterranean.

However, given weak demand on a global level, spot rates to the Mediterranean are unlikely to continue to perform as strongly as they have been and are expected to fall back in line with rates to North Europe.

The decreasing spot rate and increasing long term rate between the Far East and North Europe means that, like on many other major trades, the spread between the long and the short is falling. However, the Far East to Mediterranean stands out, as the spread here between short and long rates has been stable since the start of the year.

Watch April State of the Market Webinar for ocean freight rates on-demand to get expert insight into how the container shipping market reacts to global disruptions.