Though these rates are still very high compared to pre-pandemic levels, these drops show the crack on the trans-Atlantic. For many months, this trade has seen very soft declines in rates compared to other major fronthaul trades.

Despite the recent drops, there is still plenty of room for both spot and long-term rates to fall. Looking back to January 2021, rates for both contract types averaged USD 2 000 per FEU, around a third of today’s level.

Falling demand on this trade, easing congestion on either side of the North Atlantic basin, and softening volumes from the Far East are partly responsible for this drop. But, a more significant reason is the injection of capacity on this trade. 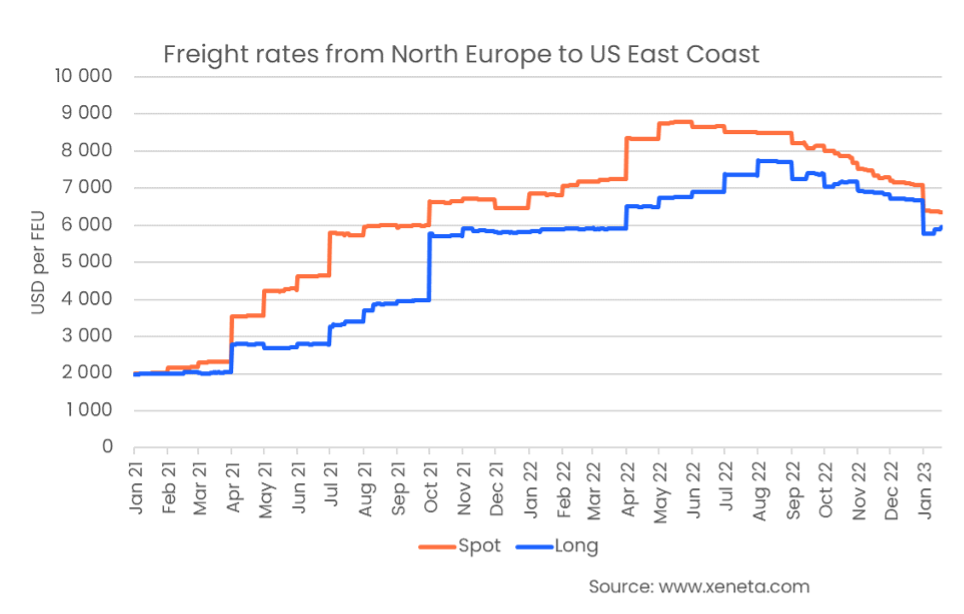 Carriers had extra tonnage on their hand after blanking sailings on the major trades out of the Far East due to falling demand and freight rates. The Far East to US East Coast trade became an obvious place to deploy these ships, given the higher profitability.
North Europe to US East Coast trade continued to deliver rising profitability at the end of last year, considering both average freight rates and average transit times. In comparison, rates from the Far East to Europe and the US fell fast.
In Q4, the average transit time from North Europe to the US East Coast stood was just over 20 days. This resulted in a revenue per FEU per day of USD 360 per FEU (assuming a 50/50 share on spot/long). In contrast, the revenue per TEU per day for carriers from the Far East to the US West Coast was much lower, USD 160 per FEU.
This also confirms the attractiveness of the trans-Atlantic trade to carriers. This spread between the Far East to North Europe and other major trades cannot hold in the long term as extra capacity chasing higher profits will bring freight rates and profitability back in line with other trades.
According to Sea Intelligence, the average weekly capacity deployed from the Far East to the US East Coast rose by 27% in January compared to the average in Q3 2021.
This trade also stands out as one of the few trades with long-term rates still below spot rates. As of 16 January, the spot rate is USD 500 per FEU, higher than the long-term rate. Shippers tendering on this trade should therefore bear in mind that this is unlike any other trade, where aiming for long-term contracts at or around today’s spot rates will most likely land you paying too much in the long term.