With so much turbulence in supply chains around the globe, how can you build a procurement strategy that'll withstand the pressure? Some developments, such as flat to falling demand, can be predicted, whereas others, like rolling lockdowns in China, cannot.

As many shippers jump on the downward trend and try to renegotiate their rates, should you? Is it worth striking while the iron's hot at the cost of possibly hurting relationships? Will this put your budget at an unrealistic number for the future? US retail sales are keeping up – Where does that leave the freight market?

Something that has also impacted the market is US retail sales. Retail sales are keeping up. They are posting continued strong months, high above anything we saw pre-pandemic.

But then the question is, how does that fit in with these most talked-about high inflation rates?

Consumers are leaving the shops with less, even when spending as much as before. Though we like to say that retail sales are measured in value, however, when we talk about shipping, volume is more important than value.

So if consumers are leaving the shop with less, it also means that fewer containers are required to bring those goods. The other slight nuance Emily mentioned during the retail sales discussion was where consumers spend their money.

"We are seeing the highest growth rates on spending on food and gas, which traditionally are not the high container imported goods. In contrast, spending on more traditionally container imported goods is seeing much slower growth, which is much more in line with inflation. This suggests that the number of goods leaving the shops is flat in last year when adjusting for inflation on few particular items like furniture, electronics etc. that are typically imported from the Far East to the US", said Emily, market analyst at Xeneta.

"So it's still very high growth rates compared to anything we saw before, but just slightly more nuanced when putting that into the picture of container shipping," she adds.

Are the geopolitical disruptions here to stay?

Xeneta experts believe geopolitical disruptions are here to stay in some form or another. Events from last year and in the last couple of months are bound to have shorter and longer-term impacts on the supply chains.

How you set up your supply chain will be beneficial in the longer term. Consider whether to opt for the cheapest supply chains or look at the relationships in the base country; whether to look for a go with familiar locations while scaling or avoid places with potential for disruption similar to the Ukraine-Russia crisis.

In the shorter term, monitor how current geopolitical disruptions impact freight rates in that region to plan ahead and avoid shipment delays in case the situation worsens.

Have all these factors on top of your mind when tendering your next long-term contracts because, without consideration, you may find yourself making data-less freight procurement decisions.

The spot rates are on the decline, but where does that leave the contract market?

Maybe in unknown territory! However, we definitely see shippers facing more considerations than a year ago, as it was a no-brainer to sign a one-year deal for big volumes on long-term contracts. There was only tailwind, higher spot markets and higher contract markets.

Port Congestion in UK/Continent And US East Coast Congestion is causing fear for carriers, forwarders and shippers, as we see around the main terminals in the UK and North Europe. Things are only getting worse with dock workers on strike in Felixstowe, UK and a lack of truck drivers around Bremerhaven in the Northern part of Germany.

Low water levels in Rhine river are slowly improving, but congestion/delays due to barge shortages and a forced decrease in volumes onboard. So there's also increased pressure on other modes of preferred transportation out of Rotterdam, such as trucks and rail. We saw a new record high spread between the Far East to the US East and West Coast at just short of $3,200. US imports are still holding up, and we see positive volumes still going into it to the US mainland from East Coast, Gulf Coast and West Coast. But the narrowing gap is a sign of retail sales not being able to hold up or not growing rapidly as we have witnessed in the past.

The rates on the platform do not include premium surcharges at any stage now and were not part of the benchmark. So, the falling spot right now is on top of the removal of premium surcharges. On closer inspection, the base rate has fallen even more as we see higher bunker surcharges etc. 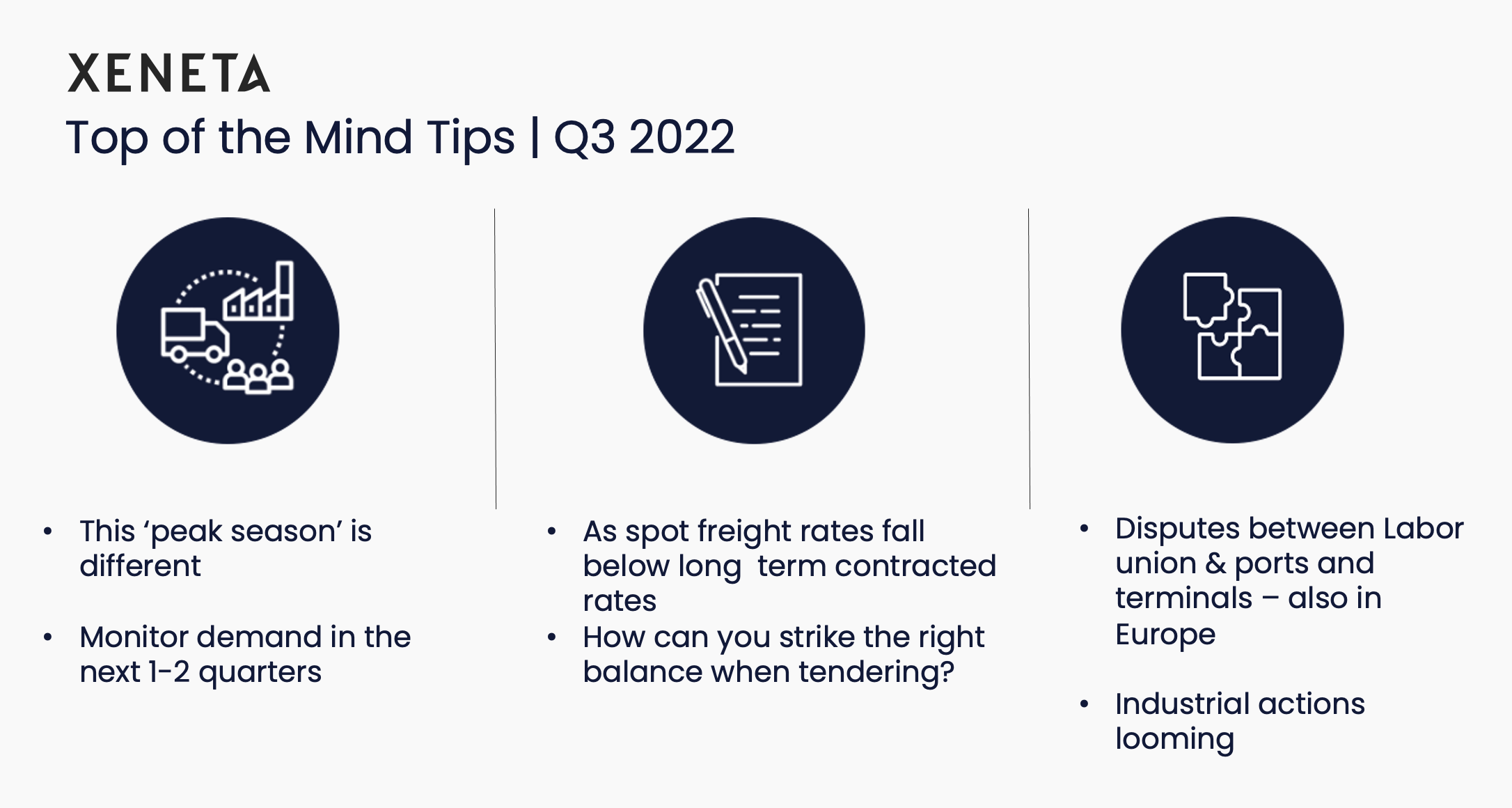 Peak season usually delivers high volume, but it will be different this time. Potentially for the first time ever, we might witness lower volumes being moved in the year's second half compared to the year's first half.

Even though that would require some significant weakness in the market, the global volumes are currently declining by 1.8%. If the second-half volumes fall below those in the first half, we would see a total decline of 2.7% globally.

However, it's still early to see that, but not unlikely, as we see a significant headwind from global economics due to inflation and politics. So it is important to monitor the demand closely in the next one or two quarters.

It will also be interesting to see what shippers will do as spot rates fall below the long-term contract rates. Do they hold a renegotiation clause in their long-term contracts that they signed perhaps a quarter or a year ago with their main carriers? Does that allow them to strike a new deal? Do they need to bring something special to the negotiation table if they want lower rates?

To strike the right balance, consider your most important trade lanes, the volumes you need as a minimum requirement, and of course, find out where you need a carrier.

But there are also other global developments to watch out for, such as disputes between labor unions and ports and terminals, as well as looming industrial actions.

Watch the full webinar on-demand to start your journey toward data, not gut, -driven decisions, that empower your ocean freight procurement.