The recent broad softening of the spot market has left many shippers wondering how this will affect the long-term market. So far, despite the recent falls, spot rates remain far above long-term rates on most of the major trades.

The Far East to South American East Coast trade is the only front haul trade where the long term is higher than the average spot rate among Xeneta's top 13 trades. Long-term rates on this trade are still below their October highs, but they have been steadily rising since 2022. As of 15 March, long term contracts from the past three months were USD 800 per FEU above the spot market, at USD 10 400. In comparison, spot market rates have declined since November 2021, falling from USD 13 000 to USD 9 150 in mid-March 2022.

On all the other major trades out of the Far East, long-term rates in mid-March are between USD 2 400 and USD 4 500 lower than the spot market, with the highest difference between the short- and long-term market to be found on the Far East to Mediterranean trade.

Despite recent spot market softening, long term rates on fronthaul trades have not shown the same weakness and are projected to continue at or near current levels for the remainder of the tender season. 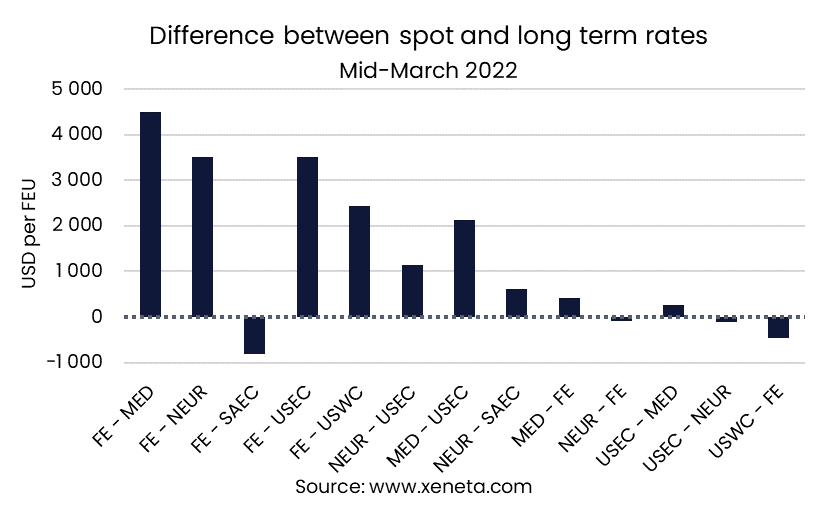 As there aren’t the same capacity constraints on the backhaul trades compared to the fronthaul, fundamental market dynamics have not been overshadowed by congestion and other disruptions as on the spot market.

This has allowed the more ‘normal’ close relationship between short- and long-term markets to continue, albeit at a higher level than pre-pandemic.

Watch the latest State of the Market Webinar for ocean freight rates.