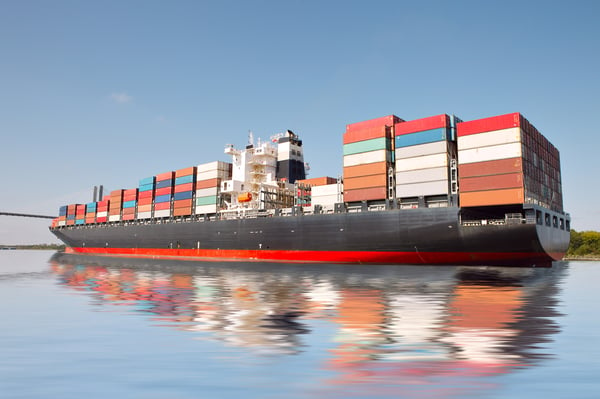 So much is going on with Brexit, that it's hard to keep all the facts and the voting straight. Prudent business executives on both sides of the Channel are planning for a hard landing. Let’s take a step back from traffic jams surrounding Calais and Dover and see how Brexit might affect the boxship industry.

Our fellow logistics journal “The Loadstar” has most admirably covered the boots-on-the-ground issues truckers-forwarders-exporters-importers are about to face from both the EU and UK sides. The problems facing the 145,000 VAT-registered businesses trading with the EU, HM Revenue & Customs, the Roadhaulers Association, and others are daunting, and likely to be worse than expected on that first Monday.

Let's follow two boxships, and see how the expected hard landing will affect the on-board cargo:

Note that both ships arrive just after Britain leaves the EU, so with Britain then having no trade treaty in effect with either China or the United States, importers must (probably) clear the goods under WTO rules. What will be the effect on the exporters and importers moving those TEU’s?

The UK importer now pays HMRC an import duty of 6%, in addition to the existing port, harbor, and other fees. If the cargo was pre-sold, can this 6% be charged to the buyer, under some sort of Force Majeure? Probably not, as the Brexit vote was 2 ½ years ago and a Hard Brexit is hardly an Act of God. The net effect can be someone paying 6% more for goods arriving on the MSC Kalina than had the goods arrived before the final decisive vote; will it be the exporter, the carriers, or the consumers paying the price?

What about the US?

The US results should be equally expensive. As of March 15, U.S. Customs has issued no guidance as to what basis UK goods are to be charged import duty. Ms. Ilyse Dawicki, Managing Director of Pilot Customs Brokerage Services told Xeneta they’d received no instructions or guidance from Customs as to how UK goods would be rated post-Brexit, nor had they received any guidance from any of their UK partners as to US exports to the UK after it all goes down.

This impending debacle is on top of already negative sentiment, falling rates, and blanked shipments: Xeneta data and the rest of the industry has recently reported Asian-Northern European spot rates dropping since Chinese New Year and in the last few weeks the 2M, THE Alliance and The Ocean Alliance have all announced blanked sailings.

In the EU, however Honda and Nissan’s production will remain unaffected as the just-signed (Jan 31 2019) Economic Partnership Agreement between the EU and Japan created the world’s largest open trade zone. Unless either UK auto industry or the box carriers drop prices, UK auto business will be lost to their EU counterparts; same as in pharmaceuticals, aerospace, and electronics.

But, suddenly the British political scene got even more jumbled: last week Mrs. May was instructed to return to Brussels and negotiate for at least a three month  postponement of the March 29th deadline; the goal was to enable the UK to finally come up with a withdrawal plan they could negotiate with the EU. However John Bercow, speaker of Britain’s House of Commons, announced Monday he would not allow the government to present May’s withdrawal agreement to the House again unless that deal was “substantially” different from the first two times it was voted down. His surprise pronouncement means the UK now has no plan to submit to the EU, thereby putting the UK at risk of a no-deal/no-treaties Hard Brexit.