September 7, 2022 – Oslo, Norway – Global air cargo market performance data for August offered a glimmer of hope for volumes in the upcoming peak season as the decline in demand seen over the previous four months slowed and general air cargo rates between Europe and North America stabilized, according to the latest weekly analysis from CLIVE Data Services, part of Xeneta.

Despite continuing transportation and supply chain chaos resulting from staff shortages in airports and airlines, global air cargo capacity in August recovered 7% from the same period last year, thanks to the surge of international summer travels in the northern hemisphere. It also continued to narrow its recovery back to the market capacity level seen in 2019, now just 9% away.

CLIVE’s ‘dynamic load factor' industry benchmark – which measures both the volume and weight perspectives of cargo flown and available capacity to produce the best indicator of airline performance - dropped by 7% pts and 2% pts, compared to 2021 and 2019, respectively, to 58%, which is at a similar level as for the past three months.

In part benefitting from the cut in jet fuel prices from the historical peak in June, general air freight spot rates averaged USD3.61 per kg in August, the lowest since September last year. This was still +4% versus August 2021 and +113% above the 2019 level, although this latter percentage compared to +156% at the start of 2022, reconfirming the continuing, gradual transition of air freight rates back to the level of three years ago.

August 2022 market data, however, could be an early signal of volumes and rates starting to pick up again, said Niall van de Wouw, Chief Airfreight Officer at Xeneta.

“In many respects, this latest data is quite remarkable relative to the two previous months because volumes in August – traditionally the quietest summer month due to the holiday season – leveled out and out-performed June and July when compared to last year’s volumes. The strong dollar and its parity with the euro clearly boosted demand from Europe to North America, with westbound load factor remaining above average for the month at 61% and rates stabilizing on these lanes,” he said. 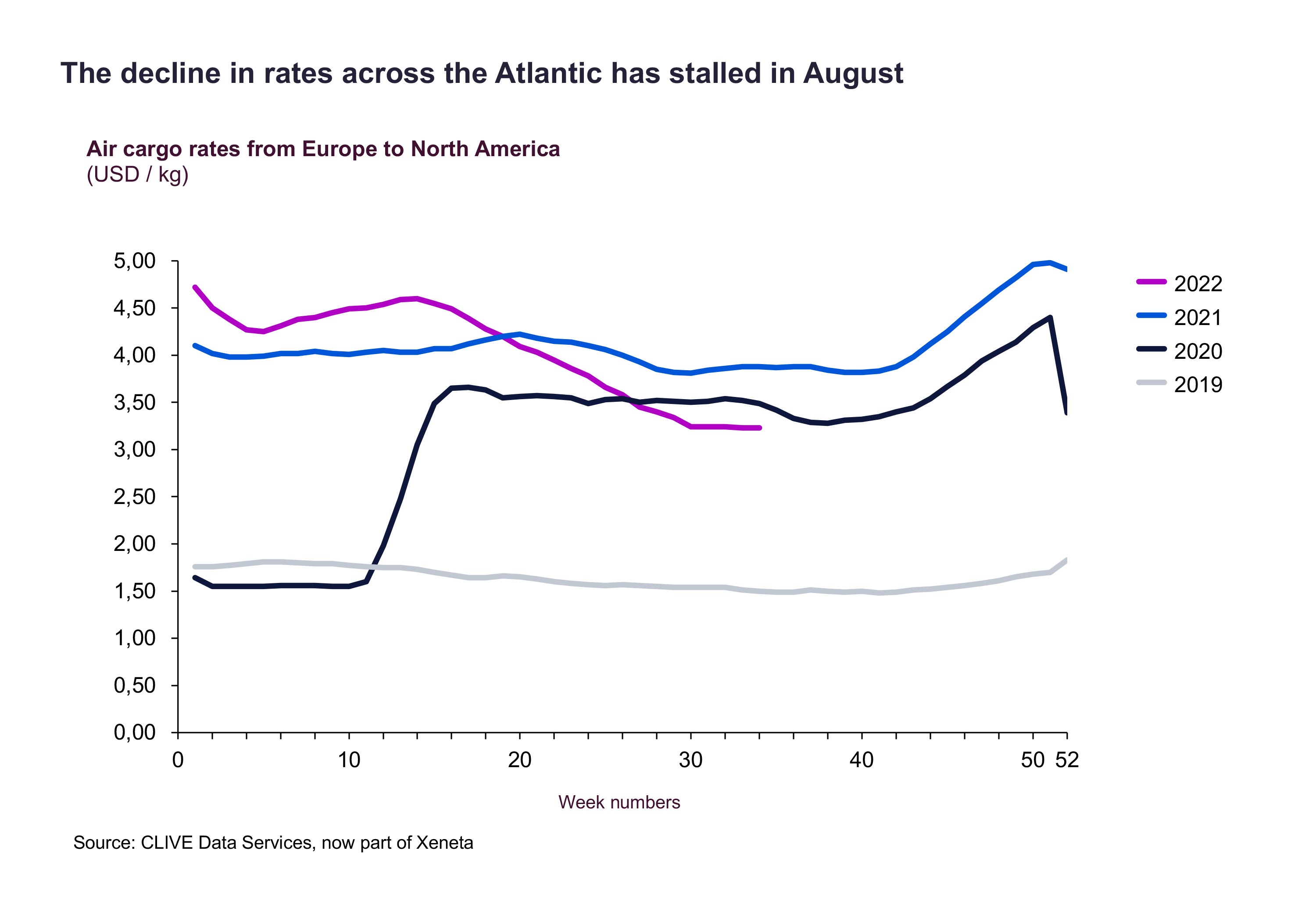 Expectations of a muted Q4 peak season remain due to continued supply chain disruptions, but Van de Wouw says the unexpected deviation from previous months seen in August could signal a better-than-expected end to the year for the air cargo market.

“Heading into summer, we saw a 15% increase in transatlantic capacity. Now, with a slowdown in global economies expected in the near term, airlines are reporting reductions in their winter schedules, and we are likely to see continued capacity constraints on popular air cargo trade lanes, such as outbound Asia to Europe and North America and Europe to North America. If the fall in demand is easing, however, as August indicates, that capacity shift could see us return to a seller’s market again, and load factors return to the mid 70% to 80% range. It is fair to assume volumes will be higher in November than in August.”

The air cargo market, however, remains chaotic and difficult to predict. Ongoing disruptions due to a lack of people resources, the war in Ukraine, industrial action, natural disasters, reports of record inventory levels in the US, high inflation, and more Covid-related lockdowns in cities in China – the ‘factory of the world' for so many products – promise more air cargo market volatility over the rest of the year, he said.