A freight quote is much more than just a sea or train shipping service price list. In the simplest terms, a freight quotation is a summary of charges levied by a carrier for the movement of cargo from Point A to Point B.

In addition, the quote is typically a combination of multimodal costs such as ocean freight rates, surcharges, fees, various adjustment factors, rules, exceptions and exclusions as per the tariffs set out by the carrier.

A freight quotation may be divided into 3 groups as below:

For each group, a list of common fees are provided in the chart. Depending on the mode of transport such as Door to Door, Port to Port and other associated services involved, a shipper or consignee will end up paying many other charges.

Pre-Carriage – is the term given to any inland movement that takes place prior to the container being loaded at a port of loading.

There are many activities that happen in a containerized shipment prior to the container being delivered at the port for export.

These activities include (but not limited to)

Chassis utilization surcharge - A fee imposed for the use of a chassis in conjunction with the shipping container to facilitate overland transportation from the shipper’s door to port.

Packing charges  - A fee that may be charged by a 3rd party warehouse for the packing of the cargo into the container at their premises.

If cargo is packed directly at the shipper’s premises, then this charge will not be applicable in this contract.

Customs Clearance - A fee paid to the customs broker for arranging your customs clearance.

Documentation charges - Charges that may be applicable for the preparation of export documentation such as Certificate of Origin, Export Permits, Licenses and such.

Related Reading
What Is ENS And Why Is There An ENS Charge?

The Anatomy of The Sea Freight Invoice

Carriage – is the term given to the actual movement of the cargo on sea by the shipping line from the port of load to the port of discharge.

There are literally hundreds of carriers around the world offering services globally. Depending on the contract of carriage and the service type mutually agreed between the carrier and the shipper, each carrier will have their own applicable charges in their shipping service pricelist. 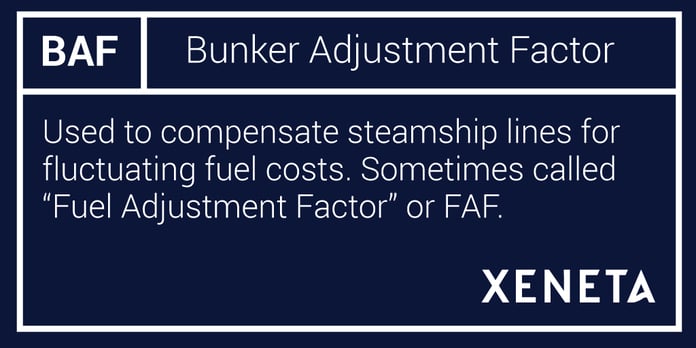 BL Fee - Bill of Lading Fee. A fee charged by the shipping line for the processing of the bill of lading on behalf of the client.

Export Service - Service fees that maybe charged by the agent

EBS - Abbreviation for “Emergency Bunker Surcharge.” A surcharge added to the cost of freight to cover fuel costs.

EIS - Abbreviation for “Equipment Imbalance Surcharge.” A surcharge on an ocean freight rate, imposed by shipping lines, to recover costs related to removing large quantities of empty containers from a country or countries where there is no export use for those containers that had been previously imported into those places.

The charge is usually a flat rate per container, and it is not necessarily applied in all trades or at all times, rather it is only applied when such trade imbalances necessitate large expenditure on shifting empty containers from one place to another.

ERR - Abbreviation for “Emergency Rate Restoration.” A surcharge added to the cost of freight to cover increases in shipping costs.

ERS - Abbreviation for “Equipment Repositioning Surcharge.” A fee imposed when a shipper requests that the carrier make empty containers available that must be moved from one location to another.

GAS - Abbreviation for “Gulf of Aden Surcharge.” Used to compensate shipping lines for additional costs incurred due to transiting the Gulf of Aden. (Group 2) 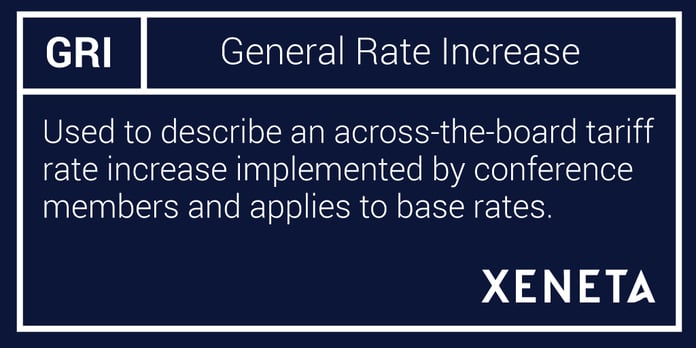 GRI - Abbreviation for “General Rate Increase.” Used to describe an across–the–board tariff rate increase implemented by conference members and applied to base rates.

OWS  - Abbreviation for “Over Weight Surcharge.”

THC - Abbreviation for “Terminal Handling Charge.” Sometimes referred to as Capatazia, in particular in Brazil.

Additional charges may include the following:

Accessorial Charges - Charges that are applied to the base tariff rate or base contract rate, e.g., bunkers, container, currency, destination/delivery.

Aden War Risk Surcharge - A surcharge on goods transiting the Gulf of Aden used to compensate shippers for additional costs including crew risk compensation, cancellation of economical speed, and redeployment of vessels.

AI - Abbreviation for “All Inclusive.” The total price to move cargo from origin to destination, inclusive of all charges (limited to transportation costs).

Base Rate - The cost of shipping a container from one point to another. Rates fluctuate frequently based on a number of different factors.

CAF - Abbreviation for “Currency Adjustment Factor.” A charge, expressed as a percentage of a base rate that is applied to compensate ocean carriers of currency fluctuations.

Cargo Data Declaration Fee - A surcharge assessed for the additional costs of declaring cargo information in advance to the European Union authorities as required for authorities to evaluate any potential security and safety threats.

DDC - Abbreviation for “Destination Delivery Charge.” A charge, based on container size, that is applied in many tariffs to cargo. This charge is considered accessorial and is added to the base ocean freight. This charge covers crane lifts off the vessel, drayage of the container within the terminal and gate fees at the terminal operation.

Bonus Information
How to Gain Transparency into Ocean Freight Rates

On-Carriage – is the term given to any inland movement that takes place after the container is discharged at a port of discharge.

Similar to the pre-carriage, there are a few activities that happen in a containerized shipment after the container has been discharged from the ship.

These activities include (but not limited to):

Chassis utilization surcharge - A fee imposed for the use of a chassis in conjunction with the shipping container to facilitate overland transportation from the port to the consignee’s door.

Unpacking charges - A fee that maybe charged by a 3rd party warehouse for the unpacking of the cargo from the container at their premises. If cargo is unpacked directly at the consignee’s premises, then this charge will not be applicable in this contract.

Customs Clearance -  A fee paid to the customs broker for arranging your customs clearance which may include the payment of any Customs Duty, VAT and other charges relating to Customs.

Documentation charges - Charges that may be applicable for the preparation of import documentation such as Permits, Licenses and such.

DDC - Abbreviation for “Destination Delivery Charge.” A charge, based on container size, that is applied in many tariffs to cargo. This charge is considered accessorial and is added to the base ocean freight. This charge covers crane lifts off the vessel, drayage of the container within the terminal and gate fees at the terminal operation.

Handling Fee - A fee for transporting, storing, or packaging goods.

Release Fee - A fee charged by the destination port to release cargo for further movement or action. 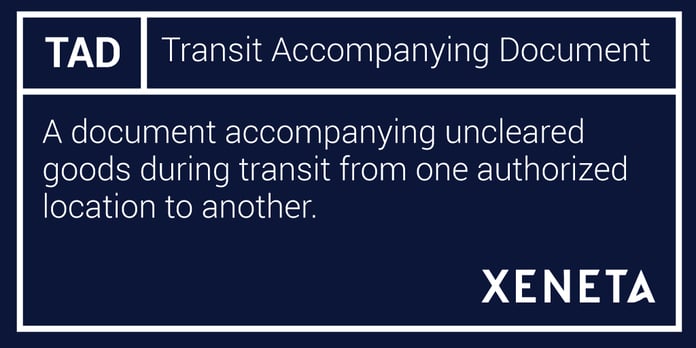 TAD - Abbreviation for “Transit Accompanying Document.” A document accompanying uncleared goods during transit from one authorized location to another.

Legality of a Freight Quote

You may have noticed on your freight quote that the carrier has indicated that quotations are subject to their Terms of Carriage, including its choice of law and jurisdiction, which makes the quotation legal and binding.

The quotation may also come with a plethora of its own terms and conditions.

Once a quote has been accepted and the cargo has been shipped, there is no room for any dispute on that quotation because the carrier has been very clear in their offering.

Even if there is no express acceptance of a quote by a shipper, but shipper books the cargo with the carrier, the carrier will deem the act of booking of cargo to be an acceptance of its quote.

It is therefore very important for a shipper to read and understand all the terms and conditions clearly and properly before agreeing to ship with that carrier on the basis of that particular quotation.

Some shipping lines also have conditions like where there is an existing service contract between the carrier and the shipper and there is a separate quotation with additional charges or requests, in those cases, the quotation (incorporating the Carrier’s Terms for Carriage and Service Contract Terms) shall prevail over the service contract.

So, are the shippers at the mercy of the carriers?

Not at all. If the shipper understands the full scope of the carriage and breakdown of the carrier’s costs down to the last cent, there will be no ambiguity.

It is prudent for you as the shipper to go through each and every item of the freight quote to understand the costs so that there are no grey areas between you and the carrier at the time of payment or cargo release..

Remember that YOU are choosing the carrier, so you are entitled to ask them to explain all charges in detail. Don’t get ripped off because you didn’t check and query the charges in advance and when you do query later it may be too late.

Disruptions and innovation are changing today’s supply chain at a rapid clip. Charges, especially ocean freight rates and bunker surcharges can change at a moment’s notice.

You as a shipper should take advantage of innovative freight benchmarking companies to compare what rate you should be paying to the carrier and whether the quotation provided by the carriers are in line with the market.