In August last week, the world's largest container vessel (>24k TEU) Ever Alot was trapped at Felixstowe port for an entire week due to the strike. Even though the staff is back to work without a resolution, Xeneta analysts expect that there is still a risk of another strike in the near future.

As US East Coast witness another rise in congestion, Transatlantic routes remain an outlier to the falling rates on the spot market and have been flat for several months.

Recently, the Wall Street Journal also commented on the US economy - aligning with Xeneta's perspective that a recession is not a certainty - "Gross domestic income, an alternative to the gross domestic product as a measure of output, points to a stall instead of a recession."

Learn more about what Xeneta experts have to say about the state of the ocean and air freight market amidst these recent events.

“This is really a nonpeak season because for the first time ever, volumes moved in the second half are lower than those moved in the first half,” said Peter Sand, chief analyst at maritime-data provider Xeneta. “There is a lot of uncertainty given the continued war in Ukraine and the global economic downturn.”

Spot-market container shipping rates have declined so rapidly, Xeneta said in a report in August, that the prices have come closer to long-term contract prices, which traditionally come at a discount, and were even below contract rates in some markets. 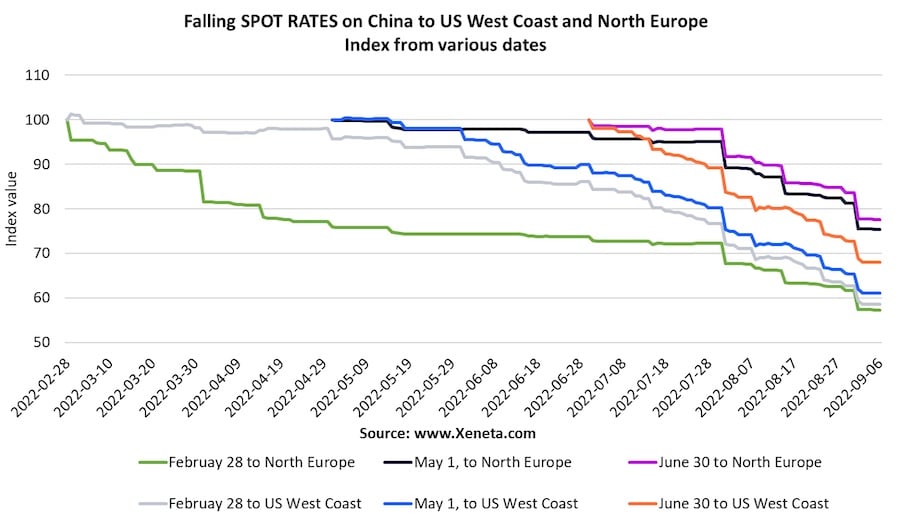 “The trend will stay like that as the peak season is canceled, demand is falling, schedule reliability is moving slowly up, and congestion is coming down in certain places,” Sand said, saying this pattern would be felt most keenly on the eastbound transpacific, the trade with the most non-alliance carriers.

Spot rates do remain profitable, however, they are already down by 42% since the end of February on the main two trade lanes, Asia-Europe and the transpacific, according to data from Xeneta.

Global air cargo market performance data for August offered a glimmer of hope for volumes in the upcoming peak season as the decline in demand seen over the previous four months slowed and general air cargo rates between Europe and North America stabilized, according to the latest analysis from CLIVE Data Services, part of Xeneta. 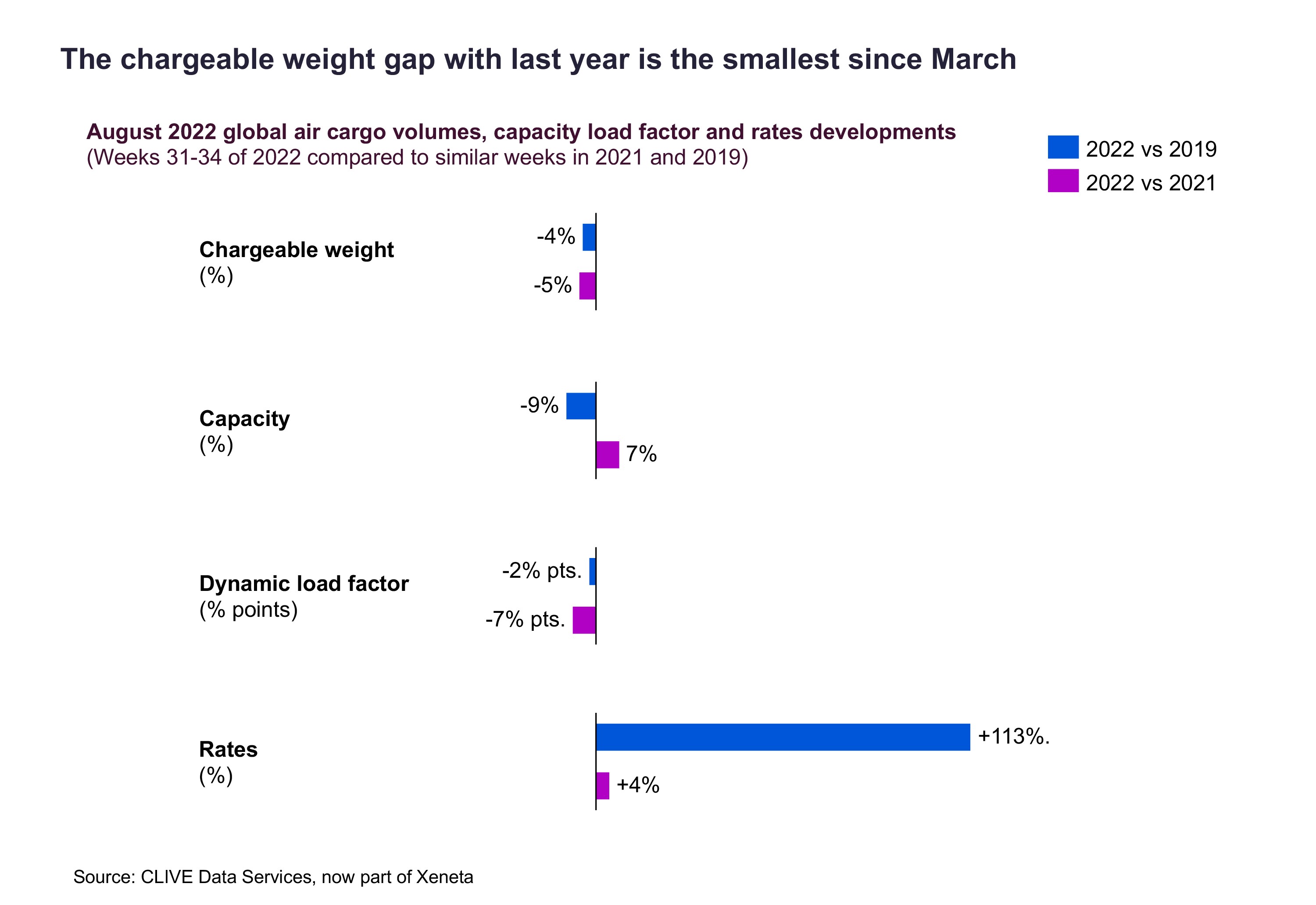 August 2022 market data, however, could be an early signal of volumes and rates starting to pick up again, said Niall van de Wouw, chief airfreight officer at Xeneta.

“In many respects, this latest data is quite remarkable relative to the two previous months because volumes in August – traditionally the quietest summer month due to the holiday season – leveled out and out-performed June and July when compared to last year’s volumes. The strong dollar and its parity with the euro clearly boosted demand from Europe to North America, with westbound load factor remaining above average for the month at 61% and rates stabilizing on these lanes,” he said.

Despite oil prices easing by about 6% over the last month, Xeneta is not aware of dismay over BAFs. It found that 78% said that they were staying with the original bunker formula, accepting the third quarter increase detailed in their long-term agreements with carriers. 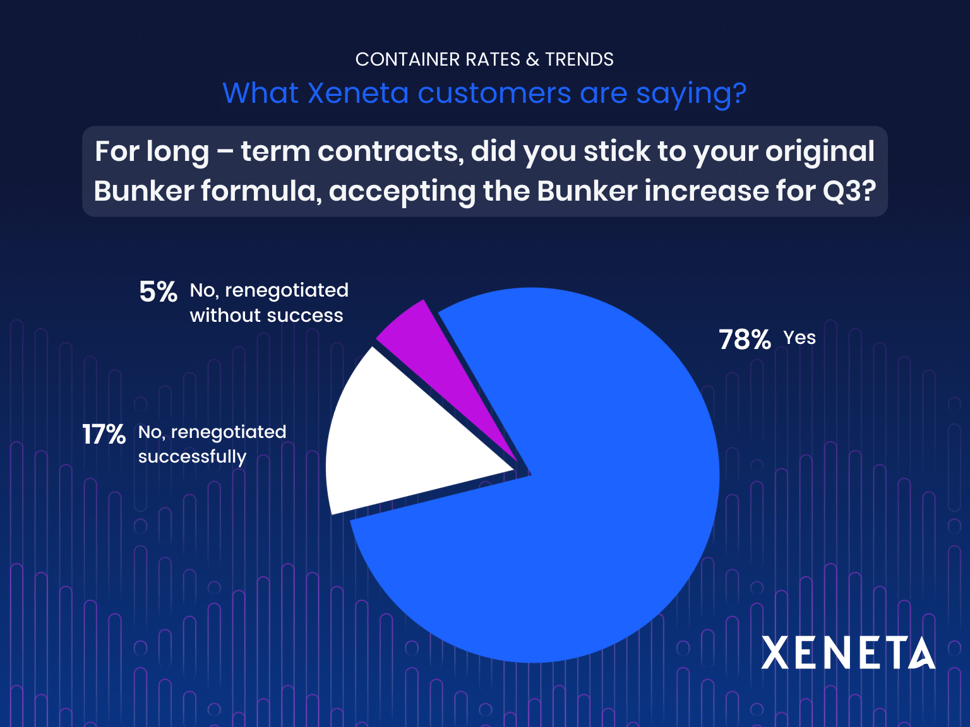 Peter Sand, Chief Analyst at Xeneta said that the survey’s findings go some way to “de-bunking current industry myths.” He was talking about reports of shippers calling for negotiations with carriers on rate reductions. Some reports described rates as falling sharply, but the Xeneta survey found little evidence of this.

Join Peter Sand, chief analyst at Xeneta, as co-host in the latest Loadstar podcast Mike King and his guests from around the world of freight, shipping, and logistics explore if the US peak season is already over; why forwarder profits peaked in the second quarter; and how to port congestion is set to continue and could act as a brake on freight rate declines.

Mike speaks in depth to Paul Stoddart, the former Formula 1 team owner and chairman of fast-growing freighter operator European Cargo. They cover the global economy, why the cost-of-living crisis will curtail belly hold capacity, the challenges of air cargo for a newcomer, and why regulators and politics are threatening to sink UK aviation.

Listen to the full episode now.

Xeneta AS, a Norway-based shipping data provider, said in a report this month that spot-market container shipping rates have declined so rapidly that the prices have come closer to long-term contract prices, which traditionally come at a discount, and were even below contract rates in some markets.

Bloated — the only way to describe US and European ports | FreightWaves

The U.S. and European ports are bloated by congestion — and only time can alleviate this situation. As we continue to read about the changing buying habits of the consumer and companies chipping away at excess inventory, the fact is the cycle of trade is so far behind that relief will not be seen in container volumes this year.

Peter Sand, the chief shipping analyst at Xeneta, told American Shipper the flow of trade is showing the reality of consumer spending.

“U.S. retail sales are flat from last month when taking out inflation, so demand is not falling sharply,” Sand said. “Shippers are still bringing in a lot of containers on the East and West coast — Gulf Coast, too. It was only a week ago we had a new record split between spot rates from the Far East into either coast. Congestion on the U.S. East Coast, though, is keeping rates elevated in combination with added disruption to that coast coming from troubles in north Europe.

While long-term box freight rates continue to climb, they are finally showing signs of coming under pressure. Data from the Xeneta platform shows that long-term rates increased 4.1% in August, standing 121.2% higher than this time last year.

Nevertheless, there are signs that new long-term contracted rates are actually starting to drop on key trading corridors. However, due to the fact they’re replacing expiring agreements with considerably lower rates, the average paid by all shippers is still climbing.

“Volumes are dropping and, as expected, long-term rates are beginning to follow the trend set by the spot market,” Patrik Berglund, Xeneta’s CEO, commented last week. 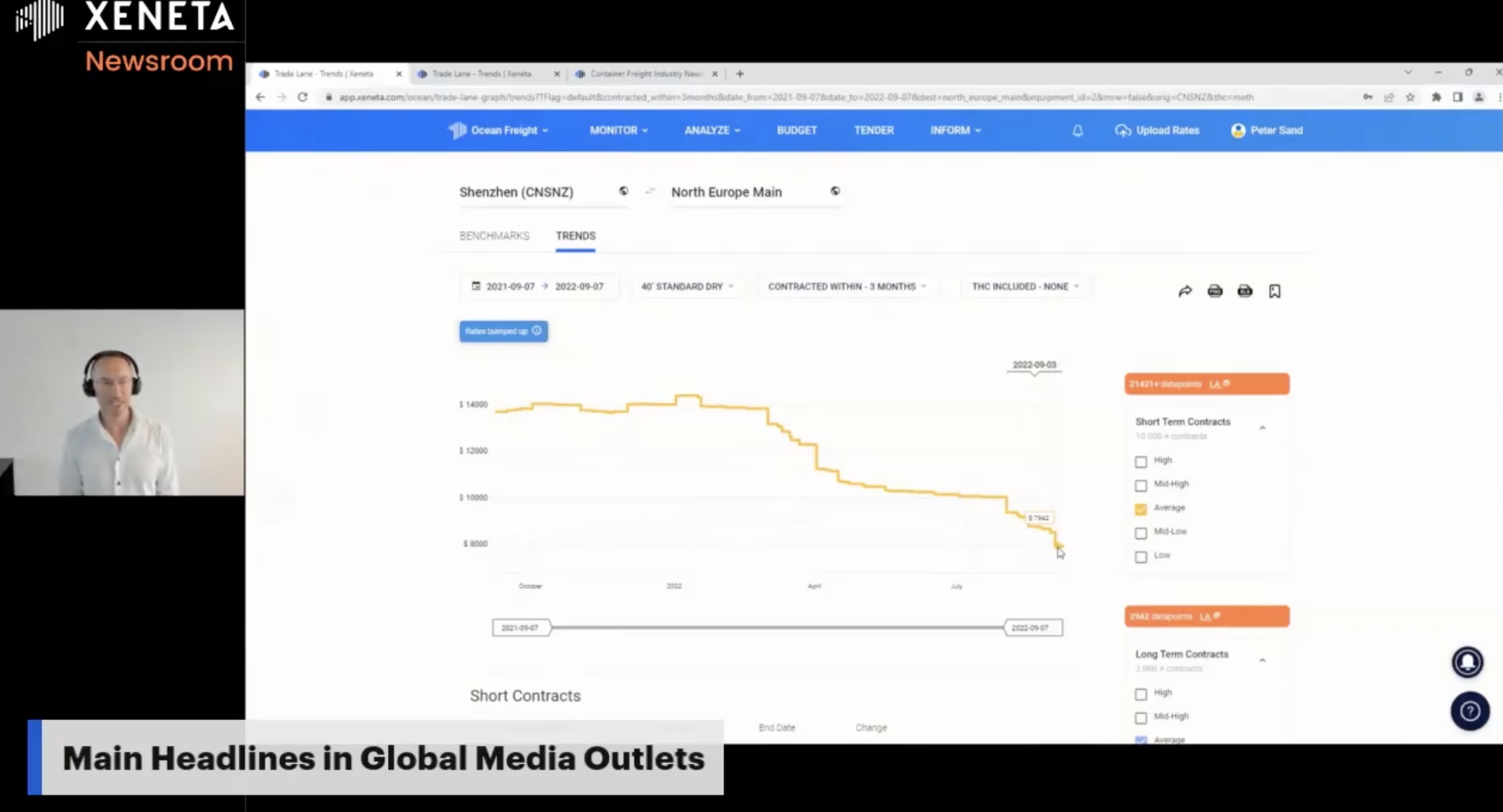