Xeneta analysts warn shippers to look at the bigger picture while negotiating. Even though freight prices are much lower now than last year, there is still room for improvement on many trades.

With a lot of uncertainty still looming in the supply chain industry, learn what Xeneta experts have to say about the state of the ocean and air freight market.

Canceled sailings around the world are skyrocketing, indicating a future decrease in demand, and during a period of time when historically, the trade has been high. 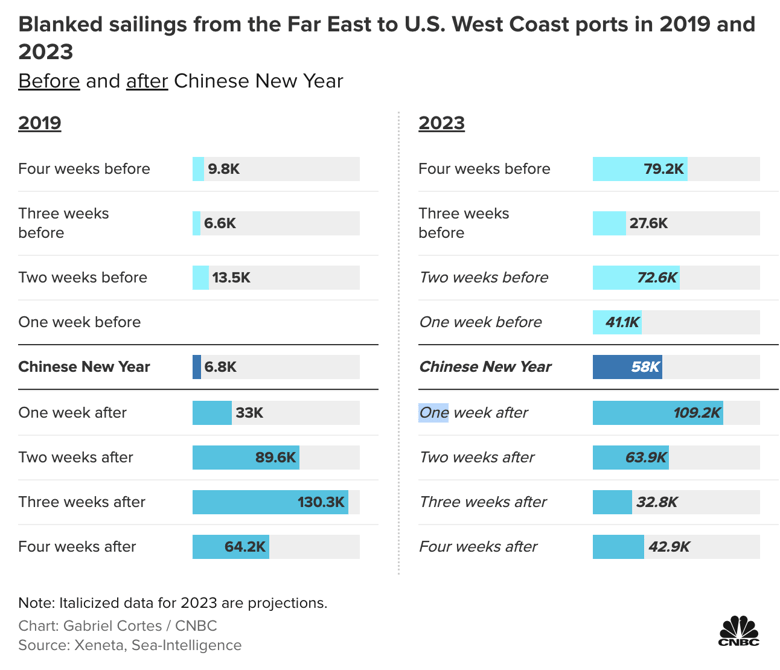 “In a normal year, we tend to see very few blanked sailings in the run-up to this major Chinese holiday as shippers stock up on their inventories,” said Peter Sand, chief analyst at Xeneta. “So, this is a worrying development for carriers and, no doubt, a bad omen of what’s to come for the year ahead.”

Canceled sailings on the other leading trade routes also are elevated. The Far East to the U.S. East Coast skyrocketed by 340% over the same time period. Asia to North Europe has had a 715% increase in blanked sailings. “This really demonstrates the low level of demand gripping the industry,” Sand said.

Prices in the most volatile segment of ocean shipping are collapsing, but top retailers like Walmart and Home Depot should not expect relief until the spring contract renegotiation season, industry experts said. "There is a sense of payback-time in the market after the COVID years, where carriers have been in absolute control," said Peter Sand, chief analyst at air and ocean freight rate benchmarking platform Xeneta.

Back to the future for container shipping  | Business Times

The immediate past couple of years have been good for the big container shipping lines, unlike almost the entire period since the “box” came on the scene to replace the slings and pallets of the conventional cargo liner age.

Views among the experts have been mixed; some expect a significant decline in rates but not a return to the bad old days.

Just before Christmas, Xeneta had observed that, following on from a steep 5.7 percent month-on-month fall in November and with weak spot rates defining the market, that slight dip was a “largely positive one for ocean carriers”. It warned, however, that “far worse is set to come in 2023” for container shipping lines.

Uncertainty is the watchword for 2023. Any progress in freight transport could be undone by a recession predicted by most economists or more unexpected geopolitical events.

Overall shipment volumes were down 8% in December versus the same period the prior year. More importantly, because 2021 was such an unusually strong year for comparison purposes due to pandemic-led distortions, demand was 13% below the pre-COVID period, said freight benchmarking firm Xeneta in its latest report.

Does Chinese New Year traditionally see a spike in air and ocean demand and freight rates ahead of the holidays, which start on 22 January? But will tradition mean a thing in this inflation-ridden start to the year? And what does the unwinding of China’s zero-Covid policy mean for manufacturers, international travel, air cargo and shipping supply chains in the coming weeks and the year ahead?

Join Peter Sand, chief analyst at Xeneta, as he shares his views on the latest market developments during a conversation with the Loadstar podcast host Mike King and his guests. Full podcast available here.

As container shipping demand continues to fall into the New Year, Xeneta Chief Analyst Peter Sand weighs in with his insights on the pace and direction of spot and contract rates; the likelihood of ship lay-ups and scrapping in 2023; plus the impact that West Coast port labor strife will have on the industry as a whole, as the East Coast U.S. emerges as the dominant player.

Watch the full story below or learn more here.

Peter Sand, the chief analyst at freight rate platform Xeneta, told Splash last week that he expects 25% of the scheduled order book will be postponed, while no more than 10% is expected to be canceled – and that would probably be options not called rather than outright and expensive canceling.