As we navigate the uncertainties that face the ocean and air freight markets in 2023, it's essential to look back at 2022 to learn what questions shippers should be asking while preparing for their next tender season.

During a plenary discussion at Xeneta Summit 2022 in November, the Vice President of Xeneta's Customer Success & Solutions Teams, Michael Braun, reviewed the previous ocean freight tender season and discussed the most efficient tactics of 2022.

When looking at the short-term peaks in ocean freight driven by global events, Q4 2022 saw a clear downward trend again on the spot market. The long-term market, however, didn't witness the same extreme trend in 2022.

Even though some shippers were already renegotiating last year, it would not reflect an immediate impact on the market. The long-term average rate saw a 10-20% drop in Q4 2022, and we can see a significant decline on certain trades in Q1 2023. However, freight rate indexes will remain high and won't reflect the latest long-term rates until Q2 2023 due to this delay.

It's also important to note that even though long-term rates are coming down now, we still don't know where they'll land as the year progresses. Due to global events like the Russia-Ukraine war or the Taiwan situation, uncertainty still reigns supreme.

Operating costs have significantly changed since the pandemic and should always considered while discussing pricing. Will they return to their previous level, or do we expect them to be slightly higher?

One example of increased operating costs comes from Hapag Lloyd's Q3 2022 results — the headlines were taken over by their record high average freight rate (high long-term rates masking the fall in the spot market), higher operating costs and limited growth in margins. 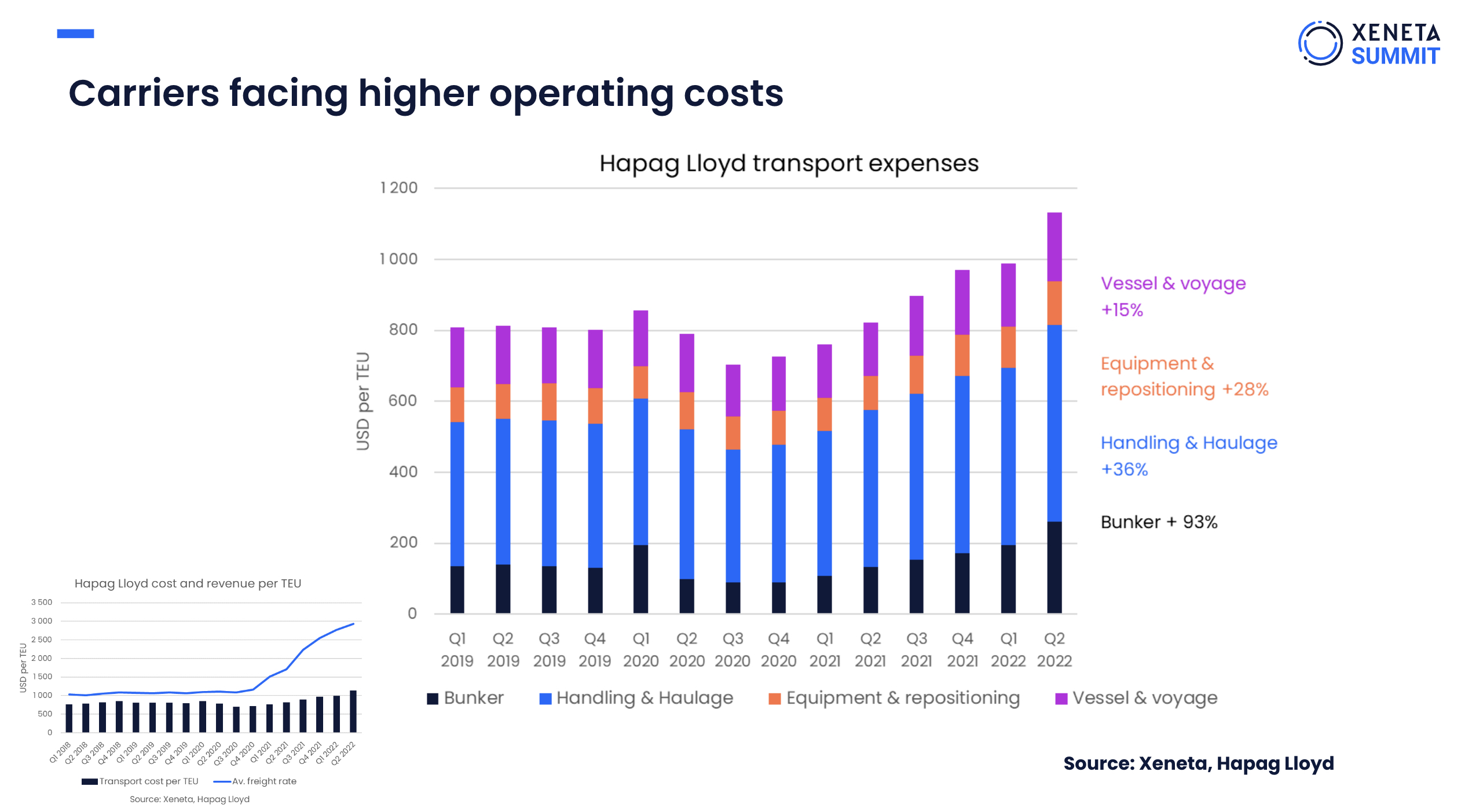 Since Q1 2019, the bunker price has almost doubled on a TEU basis. Handling & haulage costs, including the port costs, the costs of repositioning the equipment, and the container costs, have also gone up. The vessel and the voyage costs have also risen as the charter rates have shot upwards. On a container basis, prices have gone from having an average operating cost of about $800 to now hitting about $1,300.

In the short term, when the market is still in freefall, we often see carriers offering spot rates below a breakeven level. This is because they need the volumes, even if they're not necessarily profitable. But in the long run, this isn't a viable plan, as they want to make money on each container on board.

So, the question arises of how much higher operating costs are today than pre-pandemic, setting a base for what rates carriers will be willing to offer in.

Let's look at some of these costs to understand a bit more about how they might affect the freight rates moving forward.

If we move down a level to cost per TEU, carriers were spending approx. $200 per TEU for a typical round trip. Even if that rises to $660 today, it won't create a problem when the freight rates have gone from $2,000 to $10,000. However, it will cause issues if the freight rates come back down to $2,000, for example. In such a scenario, margins would take a hit, as carriers are bound to multi-year charter contracts at these high rates. The exposure to charter rates varies based on the different carriers. For example, MSC has the biggest share of the recently chartered ships amongst its fleet. However, this does not make up their entire fleet — a lot of their vessels came from before the pandemic when it was cheaper.

Taking the cutoff point as the share of that tonnage contracted before July 2021, it still accounts for most of its tonnage in 2023, leading to a cost of about $160 per TEU on an average trade.

But they have a considerable share of their fleet that's four times as expensive because they contracted it when the market was really high, and that goes into 2023. If we look further in 2024, the share contracted during the high market will increase. However, due to their huge order book, their appetite for chartered ships will fall.

Another factor affecting the cost is the bunker prices. Prices are rising at Singapore's biggest bunking hub with the war in Ukraine. There is also a considerable spread between low-sulfur fuel and high-sulfur fuel.

We don't know where the oil prices might lead in the future, but if we want to compare them to pre-pandemic rates, we need to also consider the pre-IMO 2020, which has a different cost basis.

Even though the pandemic diluted the discussions around IMO 2020 regulations, it still increased costs for many carriers. Currently, about a third of the container ship fleet, when measured in capacity, has a scrubber installed, increasing demand for high-sulfur fuel. But, again, it varies with the carrier. Some carriers have invested heavily in scrubbers, whereas others, like Wan Hai, haven't invested in any scrubbers on their container fleet

So, when comparing to 2019 levels, we see different changes in the cost price. Shippers must consider carriers' bunker adjustment factors to see if they can push their carriers to pass the benefit of their scrubber investment back onto their customers.

With new regulations being implemented in 2023, the good old days look rather simple. With IMO 2020, it was easy to comply with the regulations by either using a scrubber and high-sulfur fuel, or opting for low-sulfur fuel. But due to the complex nature of IMO 2023, there's still a lot of confusion around its implementation. This new regulation has two main indicators: the CII and the EEXI.

CII is an operational measure that's causing controversy because of the way it's calculated. The calculation does not factor in the cargo transported, but the distance traveled.

Even though 2023 will be the first reporting year for IMO 2023, it won't start to affect the fleet until 2025. Carriers will have a year to implement their action plan to improve their carbon emissions. If they aren't compliant with the regulations by 2025, they'll have to face the consequences, which are also unclear.

The second IMO regulation is the EEXI, which is an upgrade on the EDI used to regulate the design efficiency of the ships when delivered. Carriers can't change something operationally to improve the EEXI, but there are a few ways to comply with it. One of the cheapest ways is to limit the engine's power and improve efficiency. As a result, it would reduce the speed. Alternatively, carriers can send a ship to retrofit and employ cleaner technologies.

However, both of these new regulations still need to clarify two questions:

There was also an increased spread between jet fuel and crude oil prices which had not been seen in a decade. This was due to the altering demand and supply equation in the fuel industry.

Crude oil refiners were not ready for the increased demand for jet fuel after the pandemic. When passenger travel returned, it caused a significant stall on the supply side because distillate stockpiles globally were at record lows (diesel fuel, jet fuel, heating oil, etc., all come from diesel distillate). As truck diesel consumption shot up, refineries struggled to serve its increasing demand along with the supply of diesel fuel, home heating oil etc. Other factors like the increased demand for home heating oil and the sanctions on Russian oil could also negatively affect jet fuel supply. The jet fuel prices and the operating cost coming from the airline carriers will, therefore, be carried over in 2023.

At the end of October and the beginning of November 2022, jet fuel prices and fuel surcharge indices were 71% above October 2021. This indicates how the surcharge was passed from airlines to forwarders and from forwarders to shippers.

Even though the ocean and air are competitive transport modes, the air market tends to follow the trend of the ocean markets to some extent.

During the pandemic, air freight became the preferred mode of transportation due to rising ocean freight rates, declining schedule reliability and port congestion.

This was especially true for medical and perishable goods. However, we saw a shift back to ocean freight in H2 2022. Now, with a slump in the ocean freight market and slightly improved ocean schedule reliability, we're returning to an air-to-ocean ratio level similar to that of the pre-pandemic period. 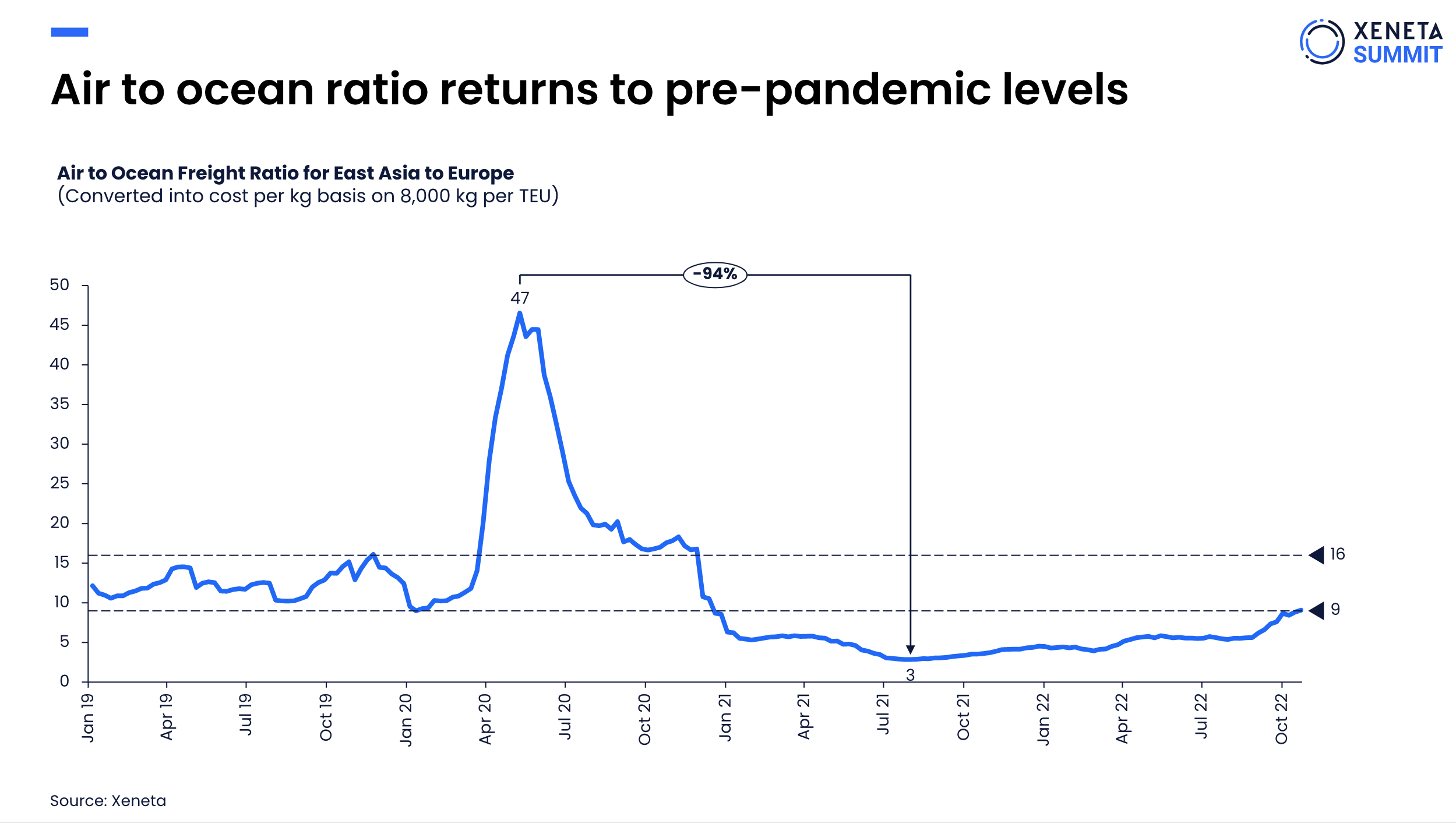 Watch the latest monthly State of the Market Webinar to stay on top of the latest market developments and learn how changing market conditions might affect your contract negotiations.