Rates from North Europe to the US East Coast have increased dramatically over the past year, similar to any other main trade lane. With disruptions hitting container shipping globally, the non-major trade lanes have also experienced reverse cascading - ships heading back to main trades, thereby reducing capacity on the smaller ones.

Rates on the westbound trans-Atlantic trade lane have come down a little from their peak in mid-November 2021, when they rose above USD 6 700 per FEU for the first time. As of January end, they stand at USD 6 600.

Spread between short- and long-term rates from North Europe to US East Coast narrow with both increasing around three-fold. 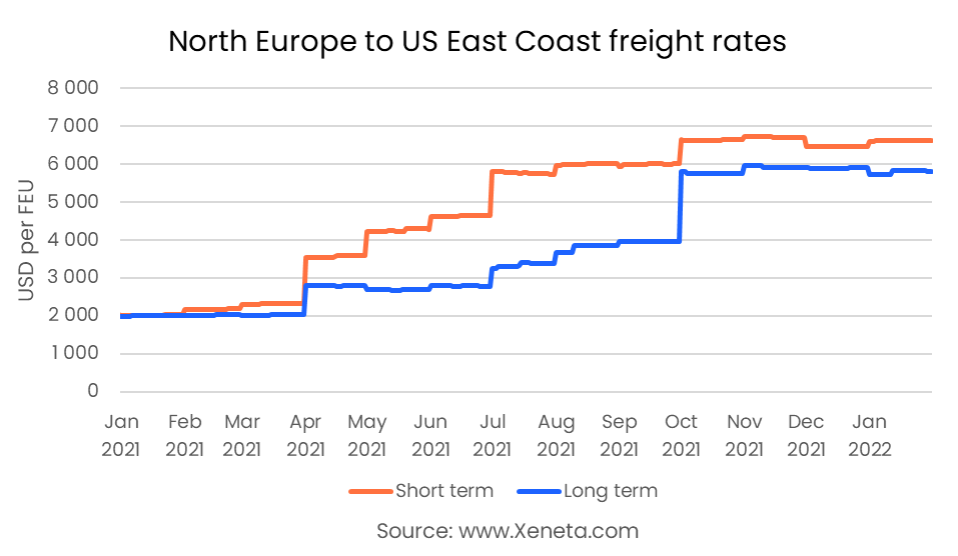 At the start of last year, the short- and long-term rates both stood at around USD 2 000 per FEU. Over the year, the spread increased, reaching its highest point in July at just over USD 2 500. Since then, the long-term rates have followed the spot market upwards, with the spread as of the January end standing at USD 800 with long-term rates from contracts signed in the past three months averaging USD 5 800 per FEU.

On the backhaul of this trade from the US East Coast to North America, freight rates have been much more stable, with short-term rates of USD 780 per FEU and long-term rates about 100 USD more expensive. Both rates are less than USD 200, more expensive than at the start of 2021. This is a clear indication that this is a backhaul trade that has also been hit by the slow manufacturing recovery in the US.

Along with freight rates, the Xeneta platform also offers insight into schedule reliability and capacity on major trades. Of the ships arriving at the US East Coast from North Europe, only 23% arrived on scheduled time in November and December 2021, a drop from 40% at the same time in 2020. In that period, the best performing carrier was Eimskip, also the only carrier to achieve schedule reliability of above 50%.

On average, in the next three months, 83 000 TEU of capacity will be available on this trade, with only three blank sailings announced on this trade in this period. Carriers are working hard to catch up on delays and ensure as much capacity as possible is available at the load ports, even as ships are stuck waiting mainly outside import ports and spending longer time at berths due to delays on land.

Until these problems are cleared, freight rates will remain very high - on this trade as well as globally, even if they continue the slight softening we have seen in recent months.