Despite primarily covering air and ocean freight rates, the Xeneta platform also offers insights into the costs of transporting the container to some major inland rail hubs. This provides shippers with information on the cost of the seaborne leg of the journey and the costs associated with getting their boxes to major railway hubs. Examples include Xeneta’s aggregation for US Midwest rail ramps, including Chicago and St. Louis hubs.

In our weekly rate update for Week 4 in 2022, we talk about increasing premiums for US East Coast and Midwest rail ramps compared to West Coast.

The relationship between freight rates going from the Far East to the USEC, USWC and Midwestern rail ramps have followed each other closely. There has been a relatively stable premium for sailing to the East coast rather than the West Coast and getting to the midwestern ramps.

However, as extreme market conditions have taken over in the past twelve months, the relationship between these three sets of rates has changed. For example, the premium between the USEC compared to USWC has widened. In 2018 and 2019, it cost an average of USD 1 150 per FEU more to send a 40” container to the east coast. On 24 January 2021, the premium stood at more than double that level at USD 2 750 per FEU.

Despite the higher price and longer sailing distance, the East coast has become more attractive to shippers importing from the Far East as congestion on the west coast intensified. Sailing into the east coast allows a shipper to avoid the chokepoints on the west coast. Although port congestion and delays are also a problem on the east coast, there are more hinterland options to choose between and shorter distances to cover on clogged-up networks than the relatively few options offered on the west coast. 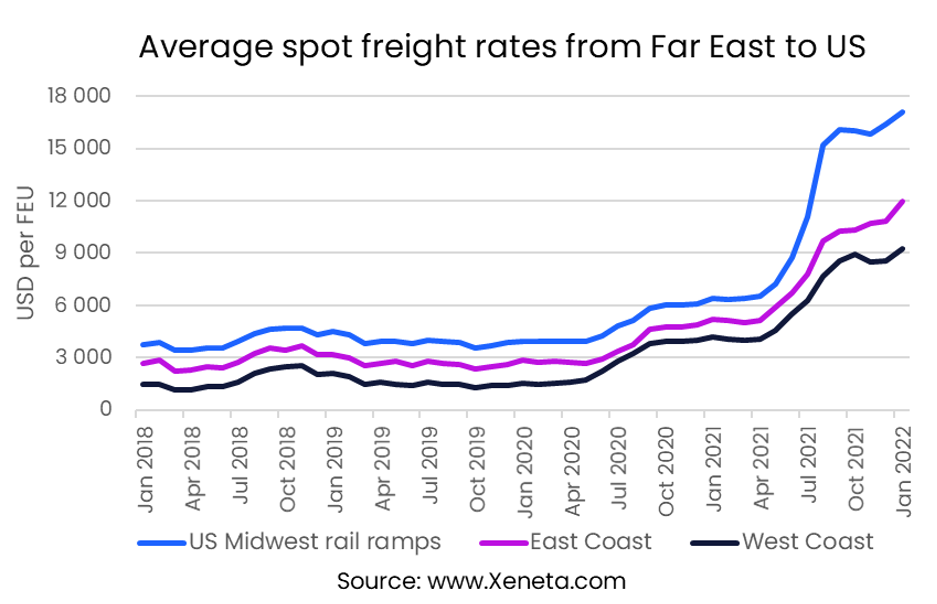 Although freight rates to the seaports have increased dramatically, those to Midwest rail ramps have done so even more, as the price of US inland transport has also gone up. Very few transport providers have been able to escape the disruptions of the pandemic and keep up with the strong demand. Moreover, the intermodal nature of global container transports means that collaboration along the supply chain is paramount in order to move the goods in a most efficient manner.