On Sunday, 26 June 2016, the 9,472 TEU Cosco Shipping Panama was the first Panamax-plus container vessel to transit the Panama Canal. Opening some three years late, at a cost above the U.S. $ 5.25 billion, the new locks give container ships (neo-Panamax) carrying approximately 13,000 TEUs all-water access from Asia to the critical US East Coast ports and inland markets.

Only four days later, the MOL Benefactor 10,100 TEUs will be the first 10,000+ TEU vessel to transit the canal; on the G-6 Alliance's new Asia- New York-Savannah route. These two vessels are the advance party of a string of post-and-neo panamax vessels steaming towards the US East Coast; there are reports of six 6,000-10,000 TEU vessels following just days behind the Benefactor.

The Panama Canal Authority (ACP) is trumpeting the values of faster transit times and 2-way traffic.

Diversion of Cargo to the Gulf & East Coast?

While this is a boom for Panama canal fees, shippers, US / Caribbean consumers, and businesses, we see this as a possibly impending financial disaster for the carriers. Let's look at the existing container arrival data from Asia into the US East Coast – Midwest: 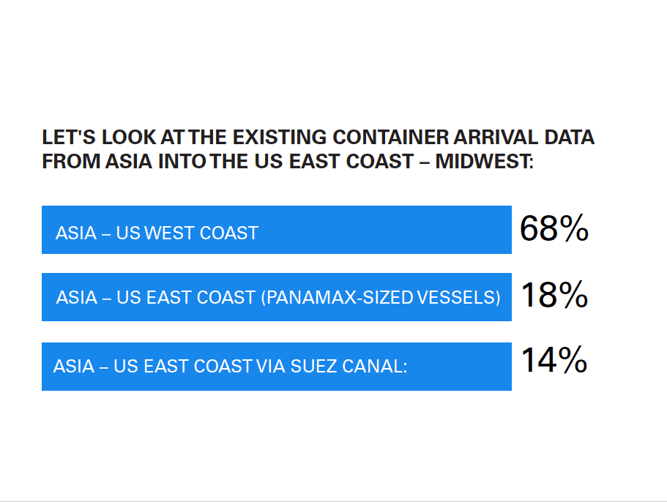 However, the Canal expansion will change these figures; international trade experts such as CH Robinson and Rosemont College's Professor Andrew Lubin expect that within the year, some 10-14% of container traffic from Asia into the United States will be diverted from the US West Coast ports to the Gulf and East Coast ports. “The neo-Panamax will keep the rates low to attract cargo,” Lubin told Xeneta,” and the direct shipments to the East Coast give the shippers an economically viable option to the West Coast labor unions.”

While I, myself,  am still not sure at the moment of the impact as it is too soon to tell, one theory is that this could put pressure on rates as more ships can now compete on the US East Coast. As the newly arriving fleets of 18-20,000 TEU mega ships cause more cascading, one of the logical consequences could perhaps be that carriers would drop their rates to attract cargo.

The cascading has already begun: earlier this week, MSC announced they're re-deploying their 13,000 TEU vessels to their secondary lanes; South America, West Coast, West Africa, and India, to make room for their 4 newly-arriving 18-20,000 TEU Megas that will complement the Maersk Megas they share as part of the 2M Alliance.

The continued low crude oil prices exacerbate the vessel oversupply. Two years ago, one of the advantages of the Megas was their fuel efficiency. Still, today's low bunker prices hurt the carriers more than help them as the 6,000-8,000 TEU ships are kept in service since they can still operate economically against the megas.

This serves to keep more capacity afloat and in service.

As stated earlier, the consequence of the expansion is too soon to tell, but it is a theory that we could possibly be seeing the further impact on rates, although we currently see a rally from Q2.

How Much Cargo Will The Panama Canal Bring to The US East Coast?

The expanded Panama Canal officially opened on June 26th with much fanfare. Vessels holding 5,000 to 14,000 containers can now pass through its channel, thus allowing for greater opportunities for more US ports. In the latest Twitter survey, we asked if diversion of container traffic is expected from the US West coast to the Gulf and East coast ports.

The results were mixed as many people remain uncertain of what to expect however, the majority of respondents, 36% of the total responses, believed 1% to 7% of container volume could transfer away from the West coast ports. This was followed by 28% of respondents indicating that more than 15% of container volume could be diverted to Gulf and East Coast ports, while 27% noted an 8% to 14% diversion, and 9% of responses indicated there will be no diversion.

Clearly, no one is sure what to expect, but one thing is certain, the majority of US Gulf and East Coast ports are not prepared for the mega-ships that can now transit through the Canal. So, it is likely, for the time being at least, smaller vessels will be responsible for these anticipated diversions while the Gulf and East Coast ports scramble to finish infrastructure projects to welcome the mega-ships.

For example, the Savannah port has invested at least $706 million to dredge its waterways used by cargo ships, while the Port Authority of New York and New Jersey is investing $1.3 billion to raise a bridge for the new, larger ships.

The US West Coast ports do not appear overly concerned by this potential diversion. In fact, the two largest ports, Los Angeles and Long Beach, are already preparing for the next generation of vessels that can hold up to 21,000 containers, which the Panama Canal cannot handle.

With the trend of carriers employing ever larger ships in the global fleet, it is no surprise that the infrastructure in ports all around the world needs some rather severe upgrades to accommodate the new mammoth vessels. And, at long last, the Panama Canal will also reflect these new ship sizes.

The Panama Canal, constructed almost a century ago, has been a vital link for the Pacific and Atlantic oceans and has had a major effect on global trade by cutting down transportation times, allowing oceanic freight carriers to forgo having to circumnavigate the length of South America. However, with the new mega-ships hitting the water, the Canal is becoming less and less viable, unable to handle the sheer magnitude of the new ships. However, that’s all going to change.

2016 marks the opening of the newly expanded Panama Canal; with a deeper draft for the locks, the canal can now handle and support the larger ships that are hitting the waters. All told, with the upgrades for the Canal, it will be able to handle all but some 176 of the largest vessels in the global fleet. The real question is, what can shippers expect this to do for global trade?

Trying to predict the future of trade rates is difficult due to the sheer number of factors in play. Even with the increased accessibility brought about by the Canal expansion, freight rates will still be at the mercy of demand. There is also the consideration of intermodal transportation, such as rail rates. While it might be easier to transport containers to the U.S. East coast, it doesn’t necessarily mean that it will be the cheapest option for shippers and manufacturers, especially if rail rates don’t cooperate. Intermodal transportation will be crucial to determining the outcome of the new expansion, but it’s not the only factor we have to consider. Many carriers are still at the mercy of fuel prices. While they are low for the time being, there’s no guarantee they’ll stay that way.

Depending on how you look at it, one of two things can happen in this scenario. The first is that freight rates will simply drop. Using the Canal again means carriers can cut down a significant portion of their transit time, thus lowering the overall price for moving freight to the U.S. East and West coasts. This might concern carriers, as freight rates have been struggling in some cases and outright failing in others.

The second option is that the Canal expansion will simply create an influx of new opportunities. Think about it; smaller carrier companies are afforded much more flexibility by using the Canal and can spur global trade. It also allows manufacturers to restructure their supply chains, distribution centers, and even their operating radius, taking advantage of the lower transportation costs.

There are too many variables to make hard and fast conclusions about what the Panama expansion will mean for carriers. However, it would be safe to say that there won’t be any great flood of changes in freight rates. Change like this moves ponderously slow, as businesses simply can’t reroute their logistics overnight. As the Port of Houston’s chief commercial officer, Ricky Kunz said, “We don’t expect a tidal wave of cargo because of the canal, but we anticipate continued incremental growth.”