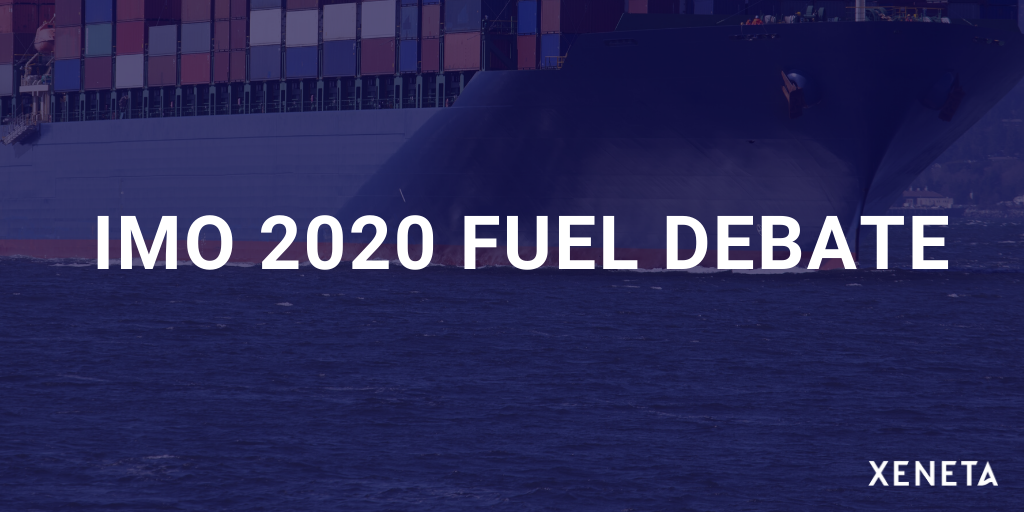 IMO 2020 0.5 Sulphur regulations will soon take effect, and the confusion over LSFO pricing remains a huge issue. There are some 4.5-5.0 million tons of LSFO in floating storage off Singapore, so if your vessel is in that area, finding LSFO will not be a problem. This was one of the many current event topics we covered at the recent Xeneta Summit and Xeneta Connect events in Copenhagen and New York this autumn.

As a reminder: The IMO 2020 regulation, which goes into effect Jan. 1, will require all ships not equipped with exhaust-gas scrubbers to burn fuel with a sulfur content of 0.5% or less, while ships with scrubbers can continue to use cheaper 3.5% sulfur high-sulfur fuel oil, HSFO. However, since installing scrubbers are both expensive and require the ships to be taken out of service, low-sulphur grades of crude are now sought as they are used to blend cheaper hi-S crude oils into fuel that will meet the IMO 2020 standards.

On the same note, according to Adrian Tolson, Senior Partner at 20/20 Marine Energy who was one of Xeneta’s keynote speakers at this year’s events: “It will be more common that refineries will just run LS crude so that they can produce a low sulphur fuel oil.  Many refineries in Europe are following this choice, mostly using North Sea crude.”

LSFO is being produced worldwide. Production costs remain difficult to quantify, as it depends on the sulphur content of the grade/grades of oil the refinery is blending and processing. “Some LSFO will be directly produced at a refiner while others will be blended with different components. Each choice will give a different type of cost basis; often it’s an opportunity cost. ‘What is the value of that component being blended or diverted into LSFO production in other markets or other refinery processes?’” says Tolson.

Lower-sulphur oil will sell at a premium to the US/Rotterdam crude oil prices, while higher-sulphur oil will sell at a discount, especially in an over-supplied market. On Nov 3 Saudi Aramco raised their price for Arab Extra Light by U.S. $4.65/bbl over their commodity-grade Arab Heavy for December sales into Asia. Note their September premium was $1.05/bbl, with October’s rising to  $ 2.65/bbl.  Since Saudi pricing is the benchmark for world oil sales, the other major suppliers of lower-sulphur oil have also raised their prices in response to the increased demand. We also have to keep in mind the virtually overnight huge increase in charter rates for the VLCC tankers moving crude oil to Asia. After the May-June Iranian-sponsored attacks on tankers in the Persian Gulf, rates jumped from approx. U.S.$ 40,000/day to some $ 185,000/day. Then after rates began to sink to pre-attack levels, eighteen drones and seven cruise missiles slammed into the Saudi Aramco oil processing facilities at Abquiq, and rates shot up again.

Tolson also adds, however, that the spread between HS and LS crudes narrowed significantly earlier this year due to the short-term shortages of HS crude due to sanctions against Iran and Venezuela. He notes that we are now returning to a more normal spread, which will, of course, move in favor of LS crude as the months progress.

US sanctions against Chinese tanker owner COSCO (Dalian) were announced on September 25, setting charter rates into a frenzy. Daily asking prices exploded to some $ 300,000/day, but despite tankers now being chartered at just under $ 100,000/day, this is still $ 250% higher than May-June. This affects the price of crude to the refinery, so it directly affects the price of LSFO and puts pressure on the floating storage off Singapore making it more expensive and means traders will quickly try and get rid of it.

On November 1, Platts announced IMO 2020 ship indexes that enable the reader to see differences in costs between LSFO vs HSFO-fueled bulk vessels. Using the spreads reported by ICE (Intercontinental Exchange), it’s currently cheaper to operate a vessel on HSFO. However, that excludes the costs of installing the necessary scrubbing equipment on each ship. And, let’s not at all forget the wash water impact to our oceans. In retrospect, it can be the most important small yet big thing we are not focusing enough on.

At first glance, HSFO and scrubbers is proving to be the smart decision at the moment, given Platts Nov 1 price differential between 3.5% and 0.5% sulfur fuel, the daily hire spread was $4,302 on the China-Australia and $5,374 on the China-Brazil. There is no reason to assume the spreads will be substantially different for a Mega/Ultra-Mega sailing China-N. Europe.

Producing HSFO is a relatively simple procedure, and there is no lack of grades of crude oil and older refineries with which to produce it. However, no one produces HS residual fuel because they want to. Certainly not, if the price has fallen heavily against crude as refiners will do all they can not to produce it.  “They will not care about the scrubber bunker market, which honestly will be easily satisfied with less than 20% of current global HSFO production,” adds Tolson.  Additionally, with other demands for low-sulphur crude from other sectors, notably gasoline, diesel, and plastics feedstocks, low-S crude will move to the market paying the highest price. But, as mentioned earlier, it is Europe where the heavier demand for LS crude is, due to the older refining technology. Asia and the US already make gasoline, diesel and plastics feedstocks from HS crude oil. Although, the current geopolitical issues that affect tanker rates, and the money spent on installing scrubbers appears to be a very smart investment, HSFO will likely sell at a surprisingly high number that may hurt obvious favorable economics, and in addition, the environmental lobby cannot be ignored, Adrian Tolson concludes.

Good observation. In the end, I would like to bring it back to the earlier point made: Why isn’t the industry talking enough about the environmental gains from IMO 2020, and less on the small wins and losses to tanker and freight rates? We’re making a huge step with a more environmentally friendly set up. Why aren’t enough people talking about that?