As a special summer gift, we are bringing not one, but two freight rate updates for you this week. So let's start our rate update discussion with air freight rates out of Shanghai, followed by our regular container rate update later in the week.

Shanghai is once again experiencing rising COVID cases, just over a month after the easing of the previous lockdown was announced, from which air cargo volumes and capacity are yet to recover completely.

Compared to the peak of the lockdown in April, both cargo volumes and capacity have increased, as has the dynamic load factor, rising from 69% for all exports out of Shanghai in April to 93% in June. 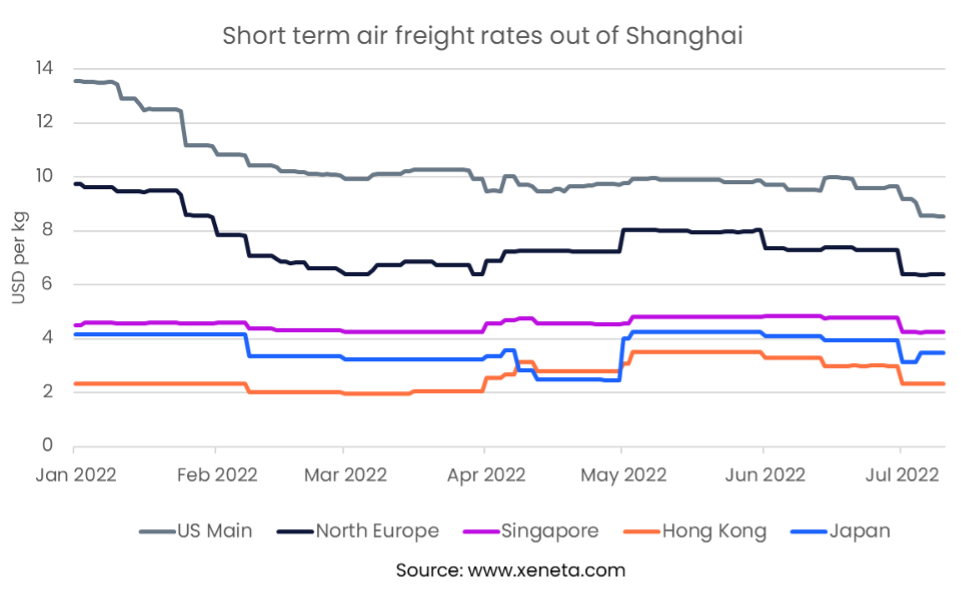 Despite the increase in the dynamic load factor, freight rates for cargo out of Shanghai have dropped on both the major outbound and intra-Asian trades.

After a period of stability, the rates to Singapore and Japan dropped at the beginning of July 2022. However, the rates also reached the levels of early January 2022.

Short-term rates to Singapore stand at USD 4.2 per kg on 1 July, a 6% decrease from 1 January, while those to Japan have fallen by 25% since the start of the year to USD 3.1 per kg.

Sign up today for our upcoming monthly State of the Market Webinar for ocean freight rates to learn what to expect as the long-term rates just hit record highs – again!