Some countries are far more reliant on ocean and air freight than others because of their geographies. Such countries have no alternatives to continue trading, leaving them incredibly exposed to increasing freight rates. Over the past year, the price of transporting goods from the Far East to Australia or New Zealand has increased by more than 45% for air or sea freight on long or short contracts. Around 30% of Australian imports come from China, Japan and South Korea, while these three countries account for a third of New Zealand’s imports.

The most significant year-on-year increase comes from the sea, where spot freight rates have increased by more than 80%, reaching USD 9 925 per FEU on 13 February. An even higher increase has been registered for long-term contracts, with the average contract being signed in the past three months averaging at USD 9 278 per TEU - an almost 130% increase from the same time last year. For context, in 2019 and 2020, long-term rates averaged USD 1 775 per FEU. 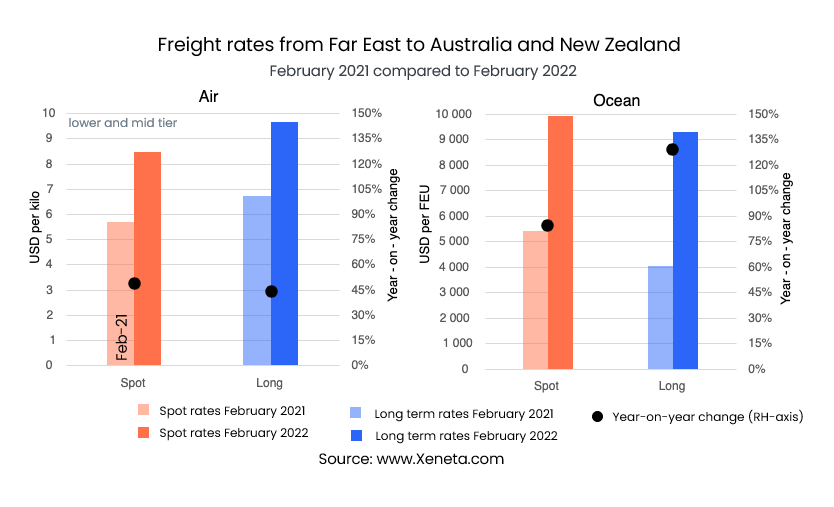 Fast rising ocean air freights, delays and congestion around ports leave some importers looking to the sky for solutions. But rates have been rising here, though not by as much as on the ocean side. spot rates from the Far East to Australia and New Zealand have increased by just under 50% from a year ago at USD 8.5 per kilo. This price is for transporting between 500 and 1000kg worth of goods in the lower to mid-tier service category.

For long-term contracts, rates from the Far East to Australia and New Zealand have increased by 44%, reaching USD 9.6 per kilo. In contrast to the short-term market, which has fallen slightly since the new year and the end of the season and had driven freight rates upwards, long-term rates have only increased since January - as shippers look to lock in rates for the coming months, rather than depend on the spot market.

Increased freight capacity on this trade is not likely to increase dramatically any time soon. Even as Australia re-opens its borders, Far Eastern countries continue to control their borders tightly, limiting passenger numbers and, therefore, belly capacity between the regions.

Whether you choose to go by air or sea, higher costs are a given, as are continued capacity constraints. More delays and disruption in the coming months shouldn’t surprise anyone as a return to more normal market conditions is a long way off, both on the air and the ocean.

Register Now for our February State of the Market Webinar.