Emily Stausboll  | November 24, 2022
Share
Subscribe
After the collapse in spot market freight rates, the spread between high and low rates from South East Asia to the US has collapsed. It has fallen to less than USD 4 500 per FEU, compared to upwards of USD 12 000 per FEU at the start of the year.
In contrast, the spread in spot rates to North Europe has increased. However, the range is still lower now than the lowest spot rate available in January.
Of the three trades from South East Asia to North Europe, the US West Coast and the US East Coast, the average spot rate to the US West Coast is the one that has fallen most since the start of the year. It has fallen from USD 11 995 per FEU on 1 January to USD 1 840 per FEU on 20 November. 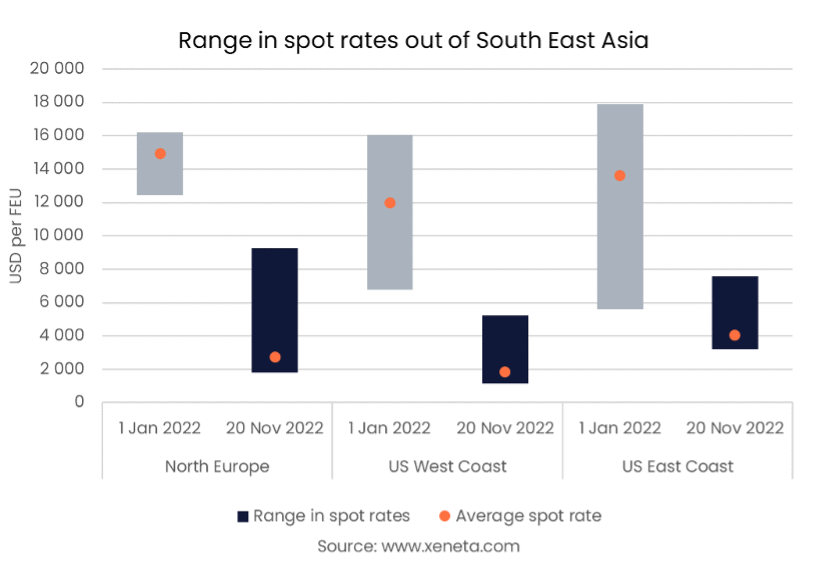 In line with the average fall, South East Asia to US West Coast is also the trade that has seen the most significant drops in the highest and lowest spot rates. Here, the market high has fallen by more than USD 10 000 per FEU since the start of the year, and the market low is down by USD 5 600 per FEU.
Shippers on this trade now pay between USD 1 150 and USD 5 225 per FEU. This range of just over USD 4 000 per FEU is less than half the range between high and low rates at the start of the year ( USD 9 400 per FEU). Currently, the largest difference between market high and market low rates on these three trades out of South East Asia is to North Europe.
The spread here has increased from 1 January, though all shippers are now paying less than the lowest rate available at the start of the year. The market high has come down from over USD 16 000 per FEU to USD 9 250, with the market low falling from USD 12 450 to USD 1 790 per FEU.
Though, most shippers are closer to paying this lower rate, with the average spot rate standing at USD 2 760 per FEU, an 81.5% fall compared to 1 January.
Of the three trades, the only one where some shippers are still paying more today than the lowest available rate in January is to the US East Coast. The average spot rate has fallen by 70.4% to USD 4 000 per FEU. While shippers on the highest spot rates have seen their costs fall to USD 7 580 per FEU (down by more than USD 10 000 per FEU since January), this is still higher than what the lowest rate was in January (USD 5 600 per FEU)