The collapse in spot rates on fronthaul trades has caught the headlines, but shippers on certain backhaul trades have seen equally large drops, with some trades having seen spot rates fall for much longer than on the fronthaul and have fallen below rates in January 2020.

From North Europe to the Far East, the average rate for a standard FEU has fallen to USD 820 per FEU. This is down by more than USD 1 000 per FEU (-56%) from its peak in May 2021, having fallen consistently since then. In fact, compared to January 2020, the spot rate on 14 November was lower, down by 6.8%. Though a small saving, it is one of the first trades to have crossed this milestone. 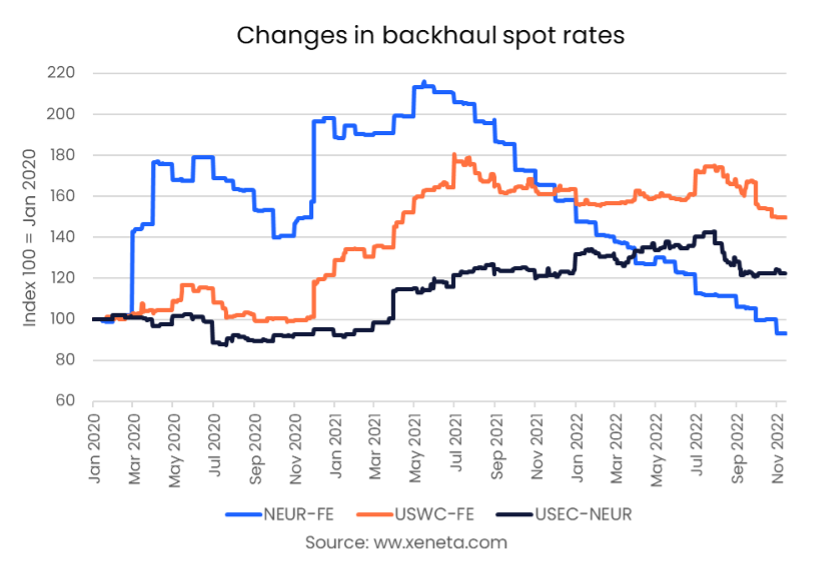 A similar return to pre-pandemic levels has yet to be seen on all backhaul trades, as spot rates on other trades are declining much slower.

While on the fronthaul, the transpacific saw the fastest and deepest fall in spot rates, the backhaul trade has seen only minor drops. The average spot rate from the US West Coast to the Far East now stands at USD 1 100 per FEU, after declining from the start of this year but still up by almost 50% from January 2020.

US exporters have struggled to find the containers they needed to export their goods over the past year and a half. Not only did they see the price rise, but also struggled as carriers refused to carry their goods to rush the empty containers back across the Pacific, where spot rates were much higher. Very few US exporters were willing to pay a high enough spot rate to attract carriers into taking more backhaul volumes.

Now that the tables have turned and carriers are scrambling for all the volumes they can get, backhaul shippers are having an easier time getting their volumes on board as prices fall.

Another backhaul trade that sticks out from the development in the other direction is from the US East Coast to North Europe. Here spot rates have come down from their peak in August, now averaging USD 750 per FEU. This represents a bigger decline than the spot freight rate on the fronthaul of this trade, which is now starting to follow the rest of the market as carriers add capacity to one of the most profitable trades to sail on.