Looking at reefer exports out of North Europe, rates on all the main trades have fallen from 3 months ago, but none are lower than they were on 18 October 2021, and only one trade has seen reefer rates drop more than those for dry boxes. From North Europe to the Far East, the average spot rate for a 40’ reefer container has fallen by 4.4% since mid-July to USD 5 230.

For reefer containers, there is higher demand going east into the Far East, in contrast to for dry containers, where the eastward journey is the backhaul. The freight rate for dry 40' containers has fallen by 10.2% in the three months since mid-July to USD 880 per FEU. The premium for taking a reefer instead of a dry container on this trade has therefore increased to 4 350 per box, compared to USD 3 670 three months ago. 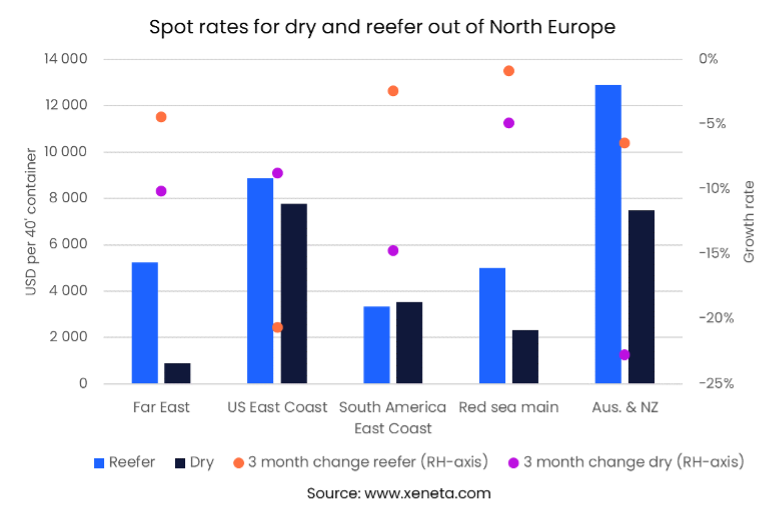 However, exports from North Europe to the US East Coast are an exception, the only major trade where spot rates for reefers have fallen by more than dry boxes. Here the reefer rates are down by 20.6%, compared to an 8.7% fall in rates for a standard FEU. This trade has been plagued with congestion as record-high volumes from the Far East into the US East Coast clog up the ports, limiting the fall in spot rates for standard containers on this trade.

The biggest increase in premium between reefer and dry containers over the past three months out of North Europe has come on the trade to Australia and New Zealand.

The one major trade out of North Europe where a reefer container is cheaper than a dry one is for exports to the South American East Coast. This is a backhaul trade for reefers, with many more goods being imported than exported, while it's the fronthaul trade for dry containers.

The spot rate for a reefer container is now USD 200 per container, lower than it was three months ago, with a reefer costing USD 3 300 compared to USD 3 500 for a dry FEU.