With spot rates coming down, the spread in rates between different importing or exporting countries within a region is also following the trend as the market normalizes and carriers can no longer push through record high rates. One example of this is the fall in the spread of rates for exports out of the Far East, with China coming back into line with its Asian exporting neighbors.

Another region where the difference between rates grew to new highs during the pandemic was the spread in rates between North Europe and the UK. A standard FEU from the Far East to the UK is now only USD 150 more expensive than sending it to North Europe, down from a peak spread of USD 2 000 per FEU back in 2021. The average spot rate from the Far East to the main ports in the UK was USD 7160 per FEU on 27 September, which is less than half the spot rate on 1 January 2022. 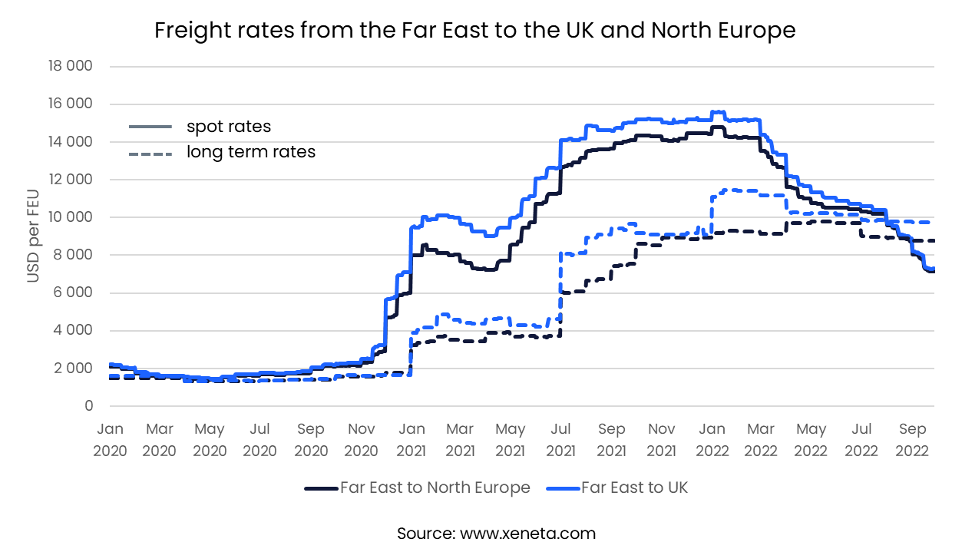 For exports from the Far East, the most expensive of the three main UK ports is Felixstowe, where the average rate at the end of September is USD 250 per FEU cheaper than importing through London Gateway and USD 350 more affordable than Southampton.

Felixstowe is currently hit by its second round of strikes in just a few months, but these have not caused big adjustments to freight rates. Lower demand and capacity calling at the ports means carriers are finding it easier to adjust their schedules to this round of strikes, limiting its disruptive effects on shippers importing to the rest of the UK and the region in general.

The spread in long-term rates from the Far East to the UK compared to those to North Europe has also come down from its peaks of over USD 2 000 per FEU but remains much higher than in pre-pandemic times.