This week's container freight update covers the average capacity and blank sailings on the Far East to the US West Coast while we head into the not-so-traditional peak season.

Compared to the same four weeks in 2021, the capacity offered is down by 13%, the equivalent of removing 21 ships of 8 000 TEU, which is the average size of ships on this trade. So far this year, capacity offered from the Far East to the US West Coast is just over 600 000 TEU lower than in the same period last year (-5.4%).

Capacity And Blank Sailing: Far East to the US West Coast 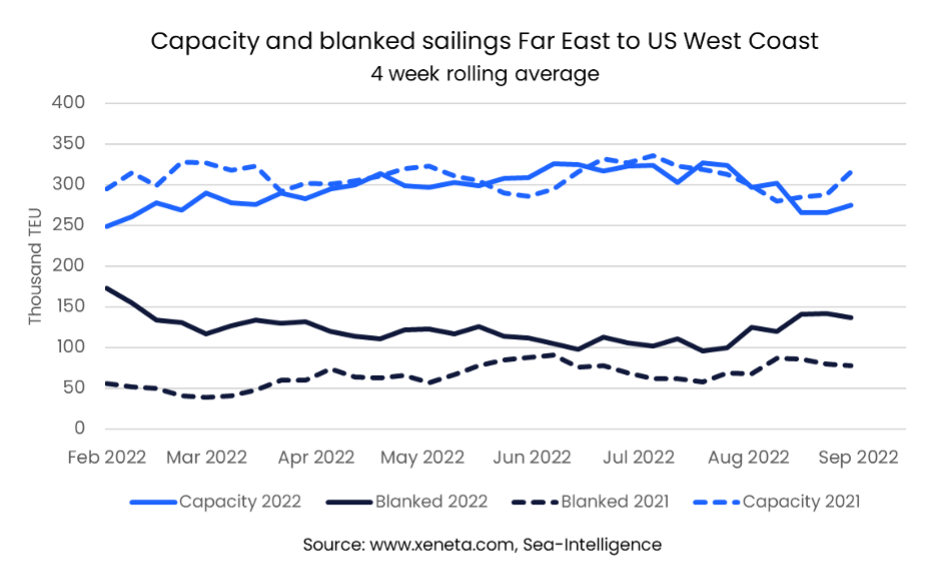 Compared to this significant drop in capacity, the fall in demand has been more pronounced. Over the first seven months of the year, the number of containers from the Far East to the US West Coast has fallen by just under 700 000 TEU (Source: CTS). Compared to 2019, capacity on this trade is up by 240 000 TEU, whereas demand is up by 890 000 TEU from the first seven months of 2019.

Carriers have upped the number of blanked sailings in response to the collapsing spot rate. Over the past 12 weeks, the spot rate has fallen by 46.3%, averaging USD 4 150 per FEU on 20 September. Despite carriers blanking 1.5 million TEU of capacity over the same 12 weeks, a fall in capacity has occurred.

Despite this being the traditional peak season of the year when blank sailings usually fall as volumes rise, the past few weeks have seen the highest levels of blanked capacity since January and early February as this year’s peak season has failed to materialize.

As the number of ships calling the US West Coast has dropped, schedule reliability has improved, reaching its highest level since congestion hit over the summer months last year at 27.1%. This is 11 percentage points better than last year, with roughly one in four ships arriving on time now compared to one in six.

The average delay for late ships has also fallen to 9.6 days. While these numbers are still not impressive, they represent a drop in the average time spent on this trade which means that the total capacity deployed on this trade has fallen by even more than the weekly offered capacity would suggest.