The highest year-to-date increase in long-term rates on these three trades comes from CAEC, up by 145% since the start of the year, at USD 2 640 per FEU in early September. Smaller increases have been registered in rates from the US East Coast (+ 35% YTD) and North Europe (+4.9% YTD).

Due to a minor rate increase, the US East Coast has now become the cheapest of the three when exporting to the South America East Coast (SAEC) on long-term rates. 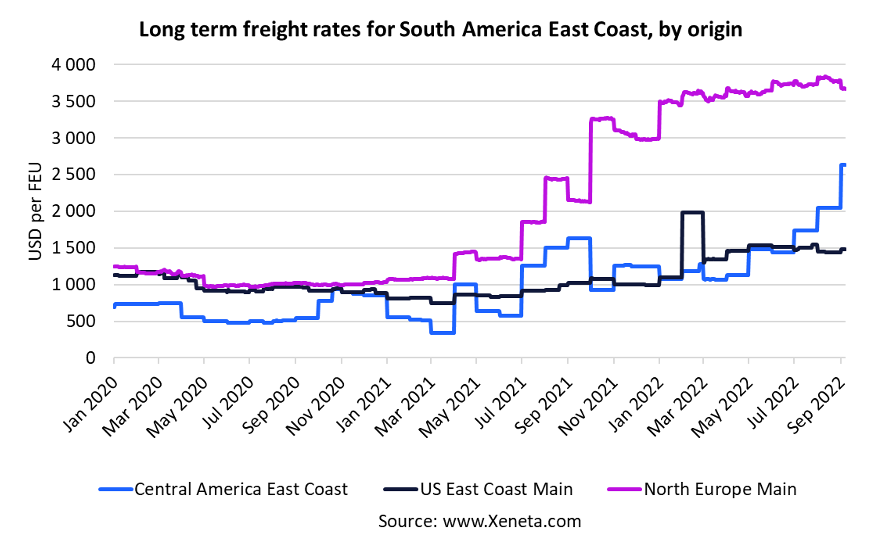 Historically, long-term freight rates from the US and Central American East Coast to South America East Coast have followed each other closely, with the route of Central America slightly less expensive than the other two. The USEC is now considerably cheaper, with rates from North Europe more than twice as high as the USEC, compared to an almost negligible pre-pandemic spread.

Volume-wise, North Europe is the largest exporter of the three to the South American East Coast, with around 315 000 TEU on this trade in the first half of 2022.

Central America is on the other end of the scale, which so far this year has exported 33 000 TEU to the SAEC. However, the latter is the only one of the three trades to see volumes grow, up 1.3% compared to 2021. Whereas volumes from North Europe are down by 10.7%, and those from the USEC are down 15.2%.