After months of long term rates being significantly more expensive than short term rates on the backhaul US to Far East trade, a fall in long term rates at the start of Q2 has brought the two back in line.

In mid-March, long term rates were USD 350 per FEU higher than the spot market for containers going from the US East Coast towards the Far East. Since then, long term rates have fallen by USD 250 per FEU, while spot rates have stayed flat, bringing the premium for the long term over short term rates down to USD 90 per box.

Container Rates From US to Far East

Similarly, long term rates for exports from the US West Coast to the Far East have fallen by USD 370 per FEU since mid-March, while spot rates have remained flat, bringing the difference between long and short term rates down to USD 90 per box from USD 600. 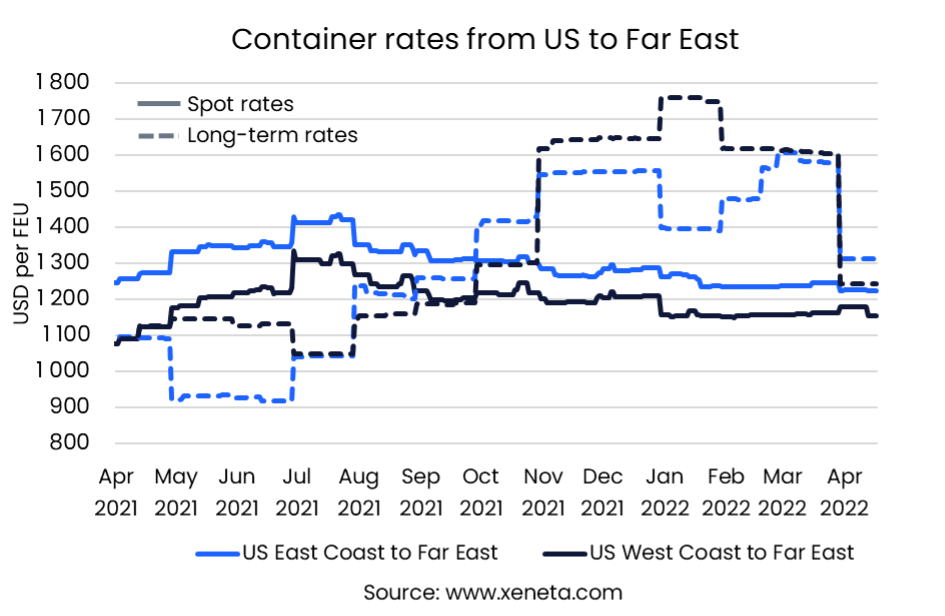 In mid-April 2021, long and spot rates were equal for exports out of the US West Coast, whereas it was USD 180 per FEU more expensive to export on the spot market out of the US East Coast compared to long term rates.

Since the start of the pandemic, US exports have performed very poorly compared to imports, with record numbers of empty containers being sent back to the Far East. Compared to the first two months of 2019, North American imports from the Far East are up by 31% in January and February this year, while exports to the Far East are down by 19% (source: CTS).

The West Coast exports just under twice as many loaded containers to the Far East compared to the East Coast, with congestion and delays not leading US exporters to shift their coast of choice as has been happening with US importers.

Sign up for the April State of the Market Webinar for ocean freight rates to get expert insight into how the container shipping market reacts to global disruptions.