Reliability on the westbound transatlantic trade has deteriorated. The latest data shows that only 18% of ships arrived on time in January, another record low, with the average delay for the ships arriving late standing at 9.5 days. Looking across the alliances, the best performing alliance was 2M, with 23% of its ships arriving on time.

While not an impressive statistic, it still beats the other alliances - with neither the Ocean Alliance nor The Alliance managing to achieve a reliability score of above 10%. Similarly, less than one in ten non-alliance ships arrived on time.

Only the Ocean Alliance didn’t hit a new record low in January, though at 6%, there is still very little to celebrate, and still leaves it as the worst-performing alliance. 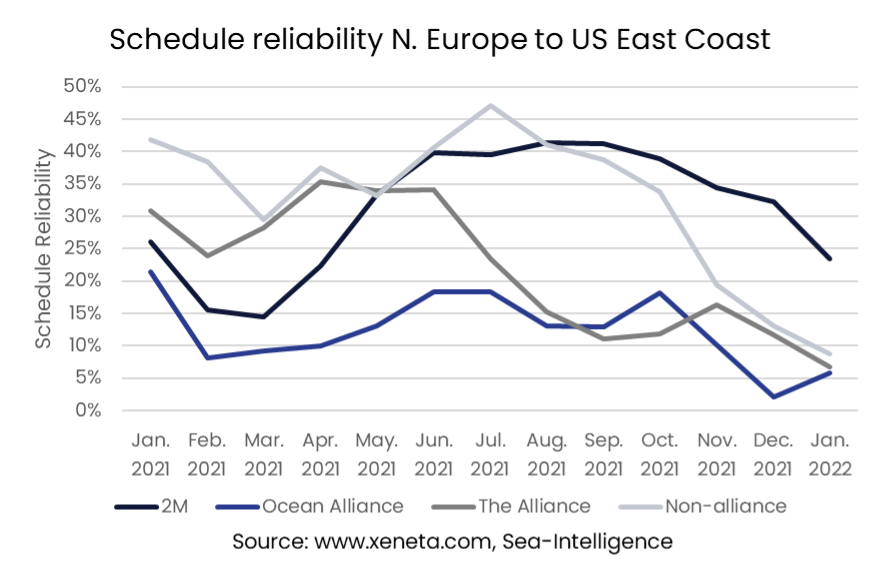 Spot rates from North Europe to the US East Coast in late March stand at USD 7 150 per FEU, while long-term contracts signed in the past three months average USD 5 980.

The difference between short- and long-term rates has reduced to half compared to when it peaked at over USD 2 000 per FEU in September 2021. This reduction can be attributed to a jump in long-term rates rather than falling short-term rates. It currently stands at USD 1 200 per FEU, up from an average of USD 100 in 2019 and 2020.

Capacity Down Compared To 2021

The fall in capacity offers matches a fall in volumes, with demand in January down 6% from 2021, with volumes here falling more than the 0.1% drop in global volumes in January this year compared to January 2021.

In line with last year, almost a third of the westbound transatlantic trade capacity comes from non-alliance carriers. The Alliance has taken the top spot in the first eleven weeks of 2021, providing 26% of the capacity offered, with the 2M alliance in a close second place at 24%.

Watch the latest State of the Market Webinar for ocean freight rates.