This number could still increase as we approach the Chinese New Year (CNY), which is being celebrated on 22 January. Carriers have already announced the blanking of 220 489 TEU, an increase from the 29 796 TEU blanked in the four weeks up to CNY in 2019. 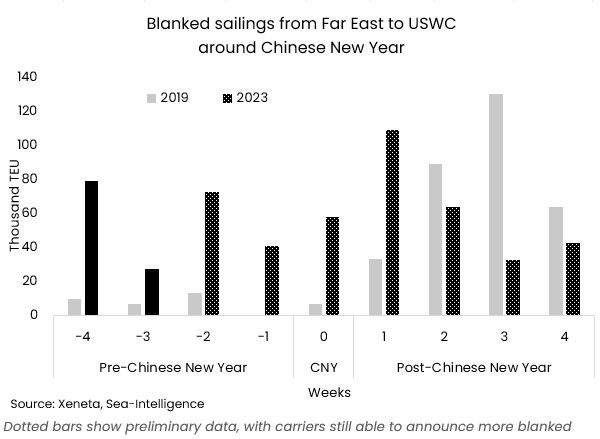 It is common to have a few blanked sailings before Chinese New Year as shippers stock up ahead of the holidays. Carriers limit their offerings in the following weeks to match the fall in Chinese manufacturing and subsequent exports.

The high level of blank sailings ahead of the holiday this year shows just how low demand is, with little to prop carriers' hopes up for the rest of the year. In the week of the holiday, announced blank sailings from Asia to the US West Coast stand at 57 970 TEU. This is a considerable increase from the 6 800 TEU blanked in 2019. However, there is still a chance for this year's number to get even higher.

Despite the big increases from 2019 levels, blanked capacity in 2023 has almost halved from the weeks around Chinese New Year in 2022. Last year, carriers were forced to blank a huge share of scheduled capacities due to the delays on the trade. In some cases, there was more than a week delay in roundtrips, making it impossible for ships to get back in time for their next scheduled departure.

So far, the announced blank sailings for the four weeks following CNY are 68 000 TEU lower than they were in 2019. However, with plenty of time left for carriers to remove more capacity, this year's total will most likely eclipse 2019's number.

In 2019 there were no blank sailings in the four weeks up to CNY from the Far East to the Mediterranean, whereas this year, there are 59 600 TEU.