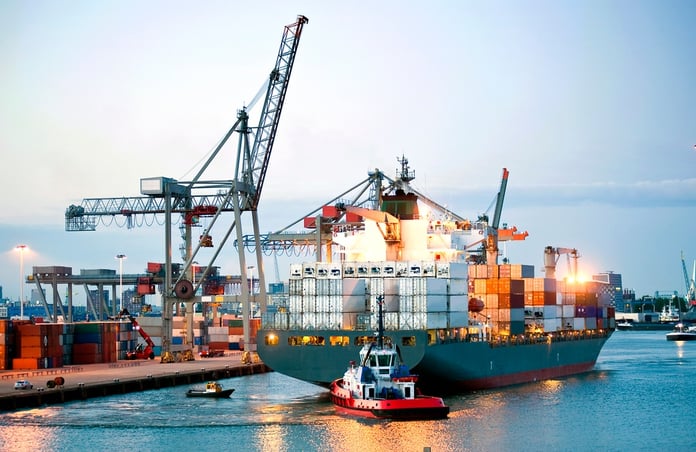 As President Trump rewrites American trade policies, Wall Street, Shanghai and the European markets are wondering if the world economies might suddenly come unglued. That’s a fair question. The next question that comes to mind is, “What will happen to box rates?” There are several issues here, which we will address case-by-case.

First, the steel in question (primarily Hot Rolled, Cold Rolled, and Galvanized coils and sheets) are shipped break-bulk, and not in containers, so there will be no effect on box rates. Additionally, on March 22, Mr. Trump announced waivers for South Korea, the EU, Brazil, Australia, and Argentina, in addition to the already-announced maybe-waivers for Mexico and Canada if they agree to renegotiate NAFTA.

Aluminum: Shipped primarily in containers, and (we think) no waivers except for Canada and Mexico have been announced. In 2017, the biggest shippers to the United States are Canada, Russia, UAE, China, Mexico, and Bahrain.

Since the March 23rd  closing price of Aluminum ingot on the LME was U.S.$ 2,070-2,072 / MT, a 10% import tariff add US$ 207 / MT to the CIF Duty Paid price, which effectively will shut any metal other than Mexican and Canadian out of the American market.

Volume from the UAE (Dubai Aluminium, Bahrain Aluminium), and the EU ports from which Russian metal ships will be affected. Rates should drop shortly after the tariffs are finalized.

The tariffs are only suspended until May 1; if trade negotiations are not resolved by that date, then White House has suggested that it may impose quotas on metal imports from those countries at any point.

The leading US box exports are auto parts, pharmaceuticals, frozen foods, civilian aircraft parts, furniture, and cars / light trucks. Other than China, no country has announced specific Americans items that will be targeted with penalty tariffs, although the EU has said they are looking sharply at Harley Davidson motorcycles, tobacco products and Kentucky Bourbon.

Five of the top 15 suppliers of aluminum to the US are also in the top tier of America’s export partners: China, Japan, Germany, France, and India, so rates for outbound USWC-Gulf-EC may drop as each country announces the specifics of its own trade barriers imposed against American goods.

This could get ugly fast. On March 23rd, Mr. Trump announced $ 60 billion in tariffs against currently-unnamed Chinese products and Chinese investment into the United States. Products expected to be affected are electronic goods, apparel, shoes, and the myriad of consumer goods found in the popular dollar-store chains. The Chinese response was to publish a list of 138 items they’re targeting, including such large-volume shipped items as pork, wine, fruit, nuts, and recycled aluminum. The Chinese authorities also reminded the US that the proposed ban on all US export recyclables (various grades of waste paper, car-truck batteries, copper scrap, plastics, etc.) has not been implemented, but that could change quickly. None of this is helpful to either the Chinese or American economies or the carriers moving goods to-from China and the United States.

How many megas are due to join the fleet in 2018 and 2019?  If tariffs and counter-tariffs are introduced, one may be too many, and by our count the answer is 30+.  If the US-China spat gets serious, then shipping volumes will suffer, and the only thing that will fill empty containers is cargo snaked away from another carrier by offering a cheaper rate. Let me reiterate: any reduction in total volume, regardless of commodity, will most likely lower rates as carriers will fight to fill their capacity.

As of March 25th, Mr. Trump’s steel and aluminum tariffs are not yet law, and he has not quantified what Chinese products will be part of his $ 60 billion anti-China program. At the same time, the Chinese sanctions on American products has not been implemented, nor have the EU penalties on bourbon, tobacco, and Harleys. Interestingly, in an interview last week with Bloomberg News, Seaspan CEO Gerry Wang advanced the idea of substitution; that while America may stop buying Chinese goods, they will continue to buy the same goods if production is shifted to India, the Philippines, and other Asian countries.

That’s an interesting point, but perhaps a bit academic; while apparel, shoes, and some auto parts similar can be relocated and production restarted in less than a year, electronic items and other technical items cannot. One wonders if there might be a better solution to such valid issues of theft of intellectual property and patent infringement than the sledgehammer approach.

Hanjin Blues: A Different Ocean Freight Market Now?
Read more
What if my Volume Decreases or Increases During my Contract Period?
Read more
Is Trade Coming to a Halt?
Read more