The US East Coast: Open for Mega Business

The maritime world was a constant lead in the news during the past few weeks; we followed the Houston-Galveston port closings, record rains, and tales of communal heroism during Hurricane Harvey, and then we switched to Hurricane Irma’s horrific winds that caused such massive destruction in the Caribbean, and Florida, with the Georgia, Florida, and Carolina ports now beginning to reopen. Let's not forget the current storm, Maria, who has so far left Puerto Rico 100% without electricity. And then, there is, Jose, threatening the US east coast.

ULCV Arrives to the US East Coast

Unnoticed by most, however, were the port calls of CMA CGM’s Theodore Roosevelt, the first mega ship into the US East Coast. The 14,400 TEU Roosevelt made port calls into New York, Norfolk (VA), and Charleston, (SC), setting TEU volume records with each stop. To reach the USEC, she transited the Panama Canal, setting a TEU record there also.

The Roosevelt became the largest container ship to call at the port of New York and New Jersey after sailing underneath the raised Bayonne Bridge. She arrived at Elizabeth container terminal after setting the record as the first ‘mega’ to pass under the raised Bayonne Bridge, which now gives air draft clearance to vessels of up to 18,000 TEU capacity. The Port Authority’s USD1.6 billion Bayonne Bridge Navigational Clearance Project, completed in June, raised the bridge roadbed from 151 feet to 215 feet (65.5 meters), allowing megas like the Theodore Roosevelt to call on New York. Prior to raising the bridge, container ships calling the port were limited to 5,000-8,000 TEU’s.

[Entering ocean freight rate negotiations with your supplier? Get the Survival Guide here.]

ULCVs - Good or Bad for Rates?

It’s good because it should relieve the seemingly relentless pressure on Asia – EU rates. Although rates were already on an incline pre-Hanjin, the August 2016 Hanjin bankruptcy, did, of course, propel things upwards even more. However, continued deliveries of ULCS Mega’s have added almost 1.1 million TEU’s into service, with all of them on the China-EU lanes.

The graph below shows short-term market average rates from Xeneta from China main ports-North Europe main ports from March 2016 - March 2017. It is already clear that pre-summer 2016, rates were already trending upwards, as demonstrated in the graph.

While utilization remains at +90%, rates have been dropping the last 6 weeks and carriers seem to be cutting rates prior to China’s Golden Week in order to build market share during Peak Season. Equally telling is that the carriers were unable to push through their scheduled August and September GRI’s.

The graph from Xeneta below shows a slight decline in market average rates looking from July 2017 through September 21, 2017.

With many megas in service and coming into the fleet in the upcoming 12-18 months, many of them will now be serving the Asia – USEC lanes, which may put pressure on those rates. Though, it is good to note that carriers are monitoring this closely and adjusting where possible, so it remains to be seen how things will play out.

Worth remembering is that constrained by the not-yet-reopened Panama Canal, as well as not-yet-modernized USEC port facilities, cargo was being carried by those antiquated Panamaxs; however the recent voyage of the Theodore Roosevelt changed that rate structure. 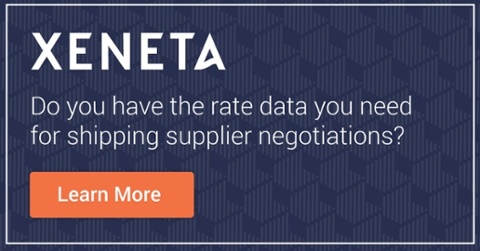 One wonders about the boom and bust world in which the carriers live. With the Hanjin debacle helping stabilize rates by removing those TEU’s, the bigger and well-managed carriers prospered under the higher rates. For example, recently CMA CGM reported a 2ndQ 2017 profit of USD 472 million, as opposed to an USD 81 million loss for the same period 2016. Sales rose by 57% from the prior year, with revenue-per-container up 12.5%. All of this is good news for those carriers operating those efficient, low-cost-per-container megas.

Currently, world trade is relatively robust. Trends in global trade remain strong, especially in Asia where exports are growing at the fastest pace since 2011. South Korean shipments abroad, a useful indicator of global demand, expanded almost 14% in June from a year earlier, an eighth straight month of gains.

Many countries are forging ahead with trade deals and the degree of connectivity between global supply chains, companies and customers also makes it more unlikely political tensions will derail world growth.

But that’s macro-economics, and while the trends seem to be positive; they’re not yet filling all boxes on the Asia- EU lanes. In addition to CMA CGM’s impressive financial number, they also announced last week the purchase of 9 more 22,000 TEU megas. It remains to be seen what will happen to those currently high Asia-USEC rates when those ULCV’s of CMA CGM, Cosco, Maersk, and others are lined up outside the Panama Canal in a convoy destined for New York, Norfolk, and Charleston. We're keeping an eye on it.

The US East Coast: Open for Mega Business from Xeneta