With the year of the Dog in full swing, Xeneta looks back at Chinese New Year and how rates may develop in the coming months.

In the run up to Chinese New Year, rates on the key Far East – North Europe trade managed to maintain their upwards momentum. The market average recorded on the Xeneta platform rose from $1,487 FEU on 1st Dec-17 to $1,726 FEU on 16th Feb-18, representing an increase of 16.1%. Rate growth may have been even higher if carriers were more successful in fully implementing their desired minimum FAK rate on the route of around $1,900-$2,000 FEU, effective 1st Feb. By comparison, the market average on the Xeneta platform was reported at $1,732 FEU on 1st Feb, while the market low was reported at $1,374FEU.

Although Chinese New Year was somewhat later in 2018 compared to the previous year, the increase isn’t too dissimilar to what the market reported in 2017, as shippers rush to fulfil shipments prior to factory shutdowns in China. Between 1st Dec-16 and 28th Jan-17 carriers were able to increase rates on the same key trade lane by some 12.1%.

Even though carriers have historically been able to increase rates in the build up to Chinese New Year, they are very rarely maintained. For example, in 2017 carriers were unable to maintain the positive rate environment once New Year celebrations had come to an end. Between 28th Jan-17 and 28th Feb-17, rates declined from $2,018 FEU to $1,731, a fall of 14.2%.

In 2016 a similar trend was also reported, as carriers lost even more ground post Chinese New Year. Between 8th Feb-16 and 8th March-16, rates slid from $887 FEU to $553 FEU, representing a decline of 39.9%. However, declines in rates post Chinese New Year in 2016 were reflective of a more volatile rate environment, which has since stabilised somewhat.

Taking the monthly average rate on the Far East – North Europe trade, volatility has declined from an average month-on-month change of 28.4% in 2016 to 5.8% in 2017, which will be seen as a positive from a carrier cash flow perspective.

Although market fundamentals will play the predominant role in determining how rates develop, this reduction in monthly rate volatility could suggest rates are less likely to immediately rebound following any declines.

Meanwhile, prudent shippers looking to finalise their RFQ bids will, along with analysing market fundamentals, wish to glean an advantage by investigating how rates have performed in the past few years, post Chinese New Year. Those seeking long term contracts will then have the information needed to best understand how rates may develop and what impact it could have for longer term contracts.

For example, early indications show rates have followed the trend seen in previous years, albeit at a slightly reduced pace compared to 2017. 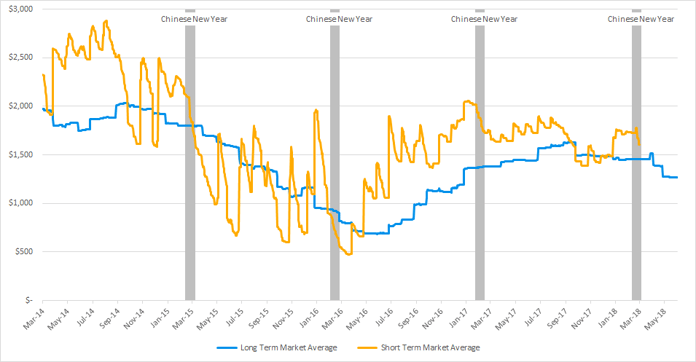 With FAK rates drifting downwards, those seeking comparative “value” from their long term contracts effective Q2-2018, are starting to achieve heavier discounts compared to those secured in Q1-2018.

However, if long term contracts and FAK rates become more closely aligned, as they were in the final three months of 2017, then further discounts to spot rates could become a reality.