How is Global Shipping Adapting to the Rising Tide of Protectionism? 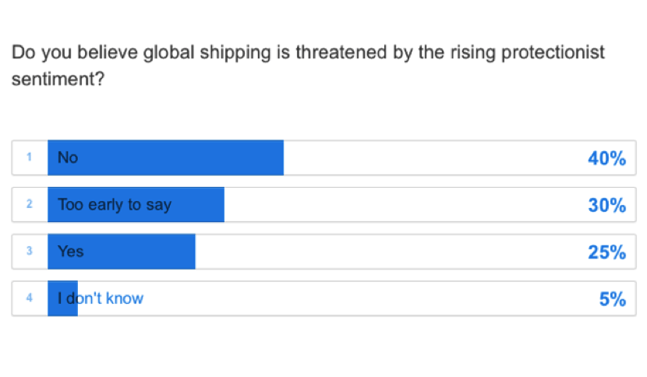 A large chunk of respondents answered that they do not believe protectionism will affect global shipping.

Taking part in the survey, Virgill Ratliff of Excelsior Worldwide Freight Logistics and Hariesh Manaadiar of Shipping and Freight Resource do not believe that protectionism will be a threat to the global shipping industry while Mark Montague from DAT Solutions commented via Twitter:

While the technology for shipping might be accelerating rapidly, the pace of the world trade growth isn't looking nearly as promising. World trade growth statistics have been more than abysmal in 2016 only growing 1.7%. For 2017, the expected growth rate is better, at 2.4% but it comes with an outlook of uncertainty about near-term economic and policy developments.

The Director-General of the World Trade Organization, Alberto Azevêdo fears that there’s more at stake than simple slumping profit margins and weak demand.

"The dramatic slowing of trade growth (in 2016) is serious and should serve as a wake-up call. It is particularly concerning in the context of growing anti-globalization sentiment. We need to make sure that this does not translate into misguided policies that could make the situation much worse, not only from the perspective of trade but also for job creation and economic growth and development which are so closely linked to an open trading system,” Azevêdo says.

"While the benefits of trade are clear, it is also clear that they need to be shared more widely. We should seek to build a more inclusive trading system that goes further to support poorer countries to take part and benefit, as well as entrepreneurs, small companies, and marginalized groups in all economies. This is a moment to heed the lessons of history and re-commit to openness in trade, which can help to spur economic growth," he added.

The Rise in Protectionism

Part of the reason that the new dropping off in trade growth is having such a tremendous impact is that, up until recently, we’ve seen a rather dynamic rate of growth. This is due, in part, to the rapid container trade growth and success that has been experiencing by emerging countries like Brazil, which have helped fuel the growth of the global GDP and trade in general. Container trade growth throughout has jumped by leaps and bounds over the past number of years, well exceeding the rates seen in 2008 before the 2009 downfall. SupplyChain24/7 analysts offered some possible explanations that for the possible recent downturn in growth.

“A number of reasons have been advanced to explain the decline in the ratio of trade growth to GDP growth in recent years, including the changes in the import content of demand, absence of trade liberalization, creeping protectionism, a contraction of global value chains (GVCs), and possibly the increasing role of the digital economy and e-commerce, but all have likely played a role. Whatever the cause, the recent run of weak trade, and economic, growth suggests the need for a better understanding of changing global economic relationships. The WTO, and other international organizations are working hard to understand this current evolution and its implications for continued growth.”

With U.S. President Donald Trump’s call for protectionist ideals, this means that there will be a continued increase in these measures which may create more issues down the road.

How Does Protectionism Work?

We’ve addressed this idea of protectionism before, and why it can be hazardous for the industry. However, for the sake of a refresher, let’s look at protectionism once again.

How does it work?

The classic example is the U.S. Merchant Marine Act of 1920, commonly known as the Jones Act, a federal legislation, imposes four primary requirements on vessels carrying goods between U.S. ports. The vessels must be:

This is protectionism at its best and directly relates to the topic under discussion.

Acts of protectionism such as the Jones Act is not unique in the world. There are 47 nations that have cabotage laws restricting foreign access to domestic trade similar to Jones Act to reserve a country’s domestic maritime transportation for its citizens.

For lower and middle-class workers that are afraid of losing their jobs to offshoring, protectionist policies seem like a win-win. However, what most people don’t understand is the continued effect that occurs from the reduction of global trade.

A report released by the Alliance for Innovation and Infrastructure titled “The Jones Act: Protectionism v Global Trade,” argues that due to the Jones Act, the daily cost of a US ship’s crew is at least six time than that of a foreign crew due to inflated wages.

As per this report, these costs are ultimately incorporated somewhere into the cost of the goods being shipped which could end up harming smaller economies.

There are several examples of such protectionism which, while providing some temporary relief to the recipients, will eventually result in allowing the overcapacity of tonnage to continue which may keep rates from rising further and this is something that will not end well for everyone concerned, making it another short-sighted solution to the overcapacity and rate issues that have been plaguing the shipping industry for years.

Taking part in the survey, Virgill Ratliff of Excelsior Worldwide Freight Logistics and Hariesh Manaadiar of Shipping and Freight Resource do not believe that protectionism will be a threat to the global shipping industry while Mark Montague from DAT Solutions commented via Twitter:

“Industrial activity climbing in the U.S. with the heavy emphasis on exports. U.S. business community will temper President Trump's call for import restrictions.”

So why do 40% of our respondents believe that protectionism won’t have an impact on global trade? Likely because there is no official evidence which suggests that the countries with the protectionist policies have lost their share of global shipping.

Nor has any shipping line in the world stopped calling US ports in opposition to the Jones Act.

On the contrary, it has been reported that a study by the United States Maritime Administration found that more than 107,000 workers are employed in the nation’s private shipyards, and the industry supports more than 400,000 jobs across the county – in all 50 states – and generates $23.9 billion in income and $36 billion worth of goods and services every year.

Given that there are both ups and downs to protectionist ideas, the conversation as to whether or not this is the move to make is ongoing.

Tell Us Your Thoughts

More policy makers are jumping on the protectionist bandwagon, which will continue to hinder the rate of global trade. As we hope to continue to organic discussions on the big topics regarding the shipping industry we’d love to hear your thoughts on the matter. Do you think global shipping is threatened by the rising protectionist sentiment? Is this simply a good move from a national standpoint, or another stop gap measure?

Is global shipping threatened by protectionism? from Xeneta