January 5, 2023 – Oslo, Norway –– The first week of 2023 has given Oslo’s Xeneta a chance to take a retrospective glance at rates data from 2022, with major front- and backhaul routes displaying stark disparities between spot and long-term rates developments.

Xeneta’s data, crowd-sourced from leading global shippers, reveals a wholesale collapse in spot rates from 31 December 2021 to 31 December 2022, with the most dramatic declines taking place on the world’s busiest fronthaul trades.

A market in motion

However, the Far East to US West Coast and US East Coast spot rates also fell foul to deteriorating fundamentals, with the former falling away from USD 8 860 to USD 1 686 per FEU across the same period, while the latter dropped from USD 11 149 to USD 3 141 per FEU.

As a result, notes Peter Sand, Xeneta’s Chief Analyst, the average drop for the trades was “an unprecedented” 79.3%. 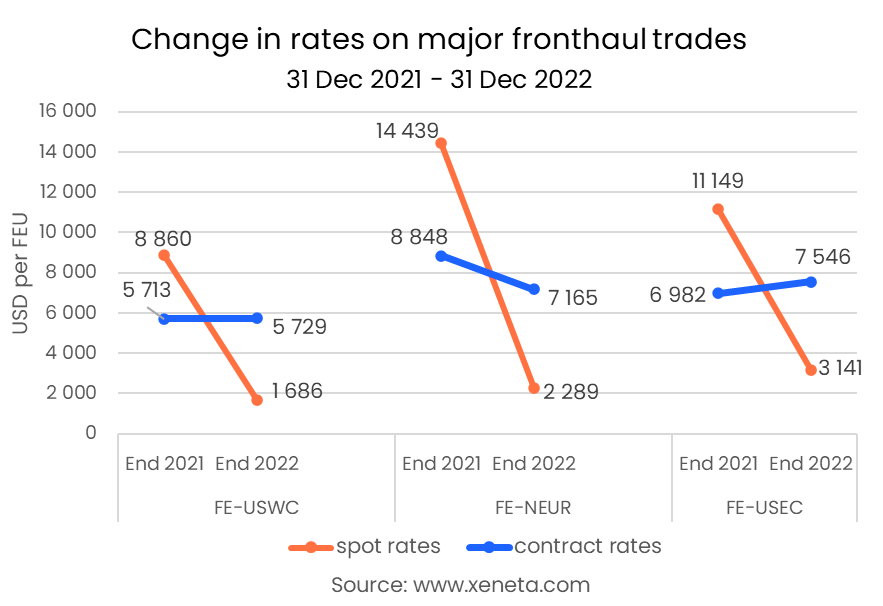 “The development across these leading inter-regional fronthaul trades was remarkable,” he comments. “One thing is the collapse of the spot rates, but it’s also very interesting to see how the fortunes switched between these and the long-term contracted rates.

“At the end of December 2021, long-term rates were, on average, USD 4 300 per FEU lower than spot rates. Fast forward a year, and spot prices have fallen off a cliff while the contracts have retained their value to such an extent they command an average premium of USD 4 450 per FEU. It’s a complete reversal.”

Sand points out that long-term rates largely defied prevailing economic winds, with only those to North Europe dropping over the 12-month period, down by 19.0%. In contrast, contracted rates into the US from the Far East actually climbed through to December 2022 – although only by 0.3% to the West Coast, with a stronger 8.1% rise to the East Coast.

He notes that part of this development “can be explained by the different seasonality of contracting on these trades”, adding that he expects “sharp falls” in rates as new long-term contracts start coming into force this year.

The picture for the backhaul routes was more mixed, with Xeneta’s benchmarking and market intelligence platform showing less dramatic, but no less interesting, trends.

On the other key backhaul trades, both spot rates and contracted agreements dropped from Northern Europe to the Far East, the world’s busiest backhaul. Here they moved from USD 1 415 to USD 772 per FEU for spot rates, with contracted prices falling from USD 1 391 to USD 959 per FEU - down by 44.5% and 32.2%, respectively.

Xeneta is the leading ocean and air freight rate benchmarking and market intelligence platform transforming the shipping and logistics industry. Xeneta’s powerful reporting and analytics platform provides liner-shipping stakeholders the data they need to understand current and historical market behavior – reporting live on market average and low/high movements for both short and long-term contracts. Xeneta’s data is comprised of over 300 million contracted container and air freight rates and covers over 160,000 global ocean trade routes and over 40,000 airport-airport connections. Xeneta is a privately held company with headquarters in Oslo, Norway and regional offices in New York and Hamburg.