November 2, 2022 – Oslo, Norway – Christmas didn’t come early for the global air cargo industry as volumes declined -8% year-over-year in October and provided no current signals to indicate an upturn in 2023, as year-over-year demand fell for the eighth consecutive month, according to new weekly market data from industry analysts CLIVE Data Services, part of Xeneta.

The drop in demand, measured in chargeable weight, was also -3% below the pre-pandemic level in 2019. Compared to last year’s levels, global air cargo capacity continued to recover in October but at a slower pace and remained -7% below the pre-covid 2019 level. This contributed to a more subdued ‘dynamic loadfactor,’ CLIVE’s measurement of airline performance based on both the volume and weight perspectives of cargo flown and available capacity. 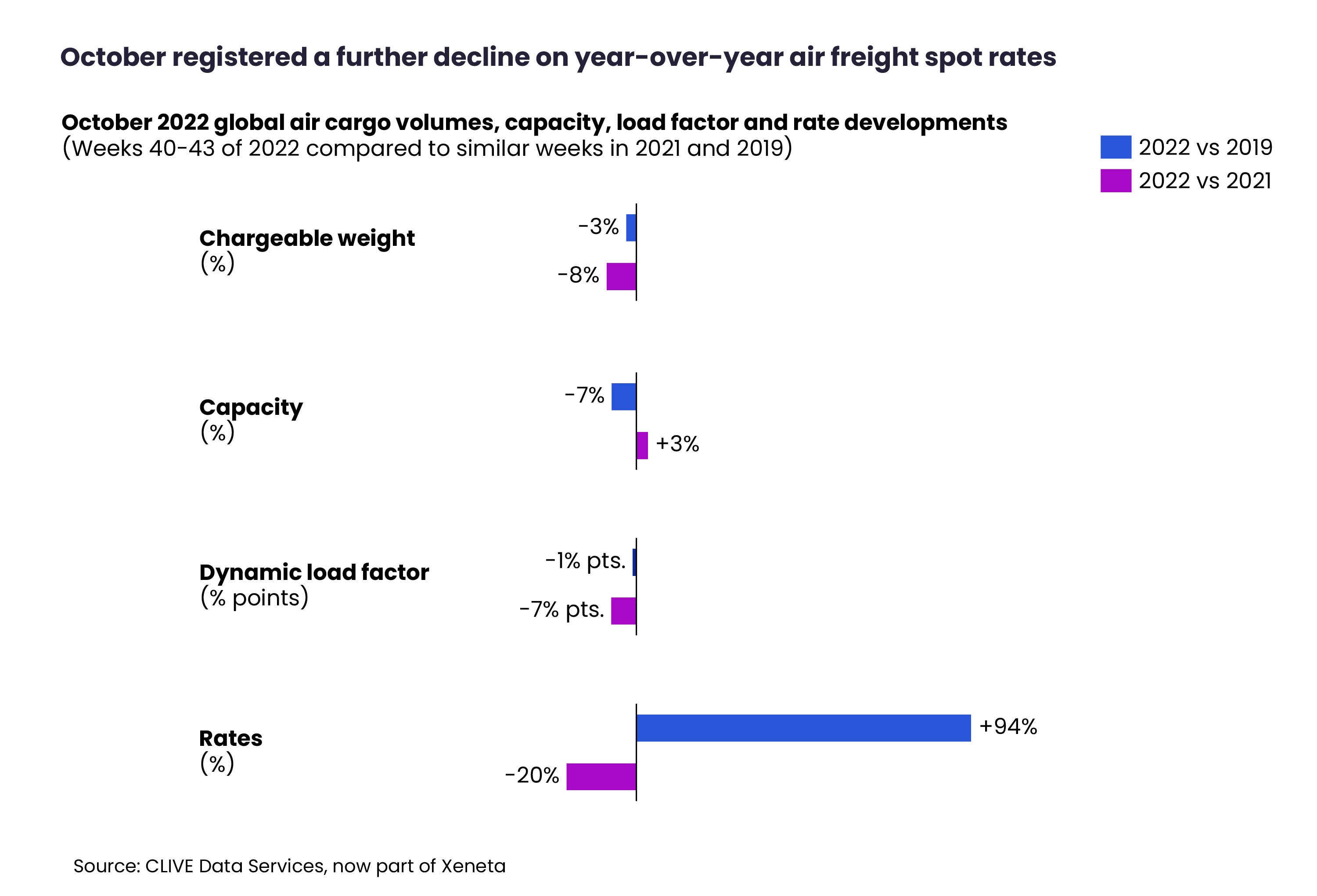 As falling demand meets rising capacity, load factors have been declining over the past 18 months. In October, the 61% dynamic loadfactor was -7% pts and -1% pts in comparison to 2021 and 2019, respectively.

“We are six weeks away from Christmas, and there is no indication there will be a peak. Demand worsened in October over the -5% reduction we reported in September, but this is not likely to surprise the market given the global economic outlook, although it’s clear that rates remain at a higher level than some observers would have expected in the current conditions.

Airfreight is certainly not currently suffering the decline of the ocean, where Xeneta has recorded rate drops of 60%-70% in the last nine months. Ocean freight is responding to the market conditions much faster than air is and normalising quickly from a rates point of view. The outlook for air cargo remains uncertain. We don’t see pressure on capacity, and we don’t see an increase in rates,” said Niall van de Wouw, Chief Airfreight Officer at Xeneta.

Looking ahead, he expects more challenges and uncertainties for the air cargo market over the next 12 months. “If you take the broader perspective, I see very few signals that would support an increase in general airfreight in 2023 – be that because people have higher personal bills or because people are spending more on services relative to goods.

It is also fair to assume that even if consumers in Europe and North America were to buy exactly the same amount of goods in 2023 as in 2022, which is unlikely, then a higher portion of the transportation in support of that, whether it’s the finished products or the hard materials to make those products, is likely to move by the ocean as a response of the higher reliability returning on the sea.

Airfreight received a boost in the last two years because of the incredible mess on the ocean side, but shippers are now likely to feel more comfortable moving back to the ocean from a reliability point of view. With all these factors combined, I don’t see where a lot of general freight growth demand drivers will come from. 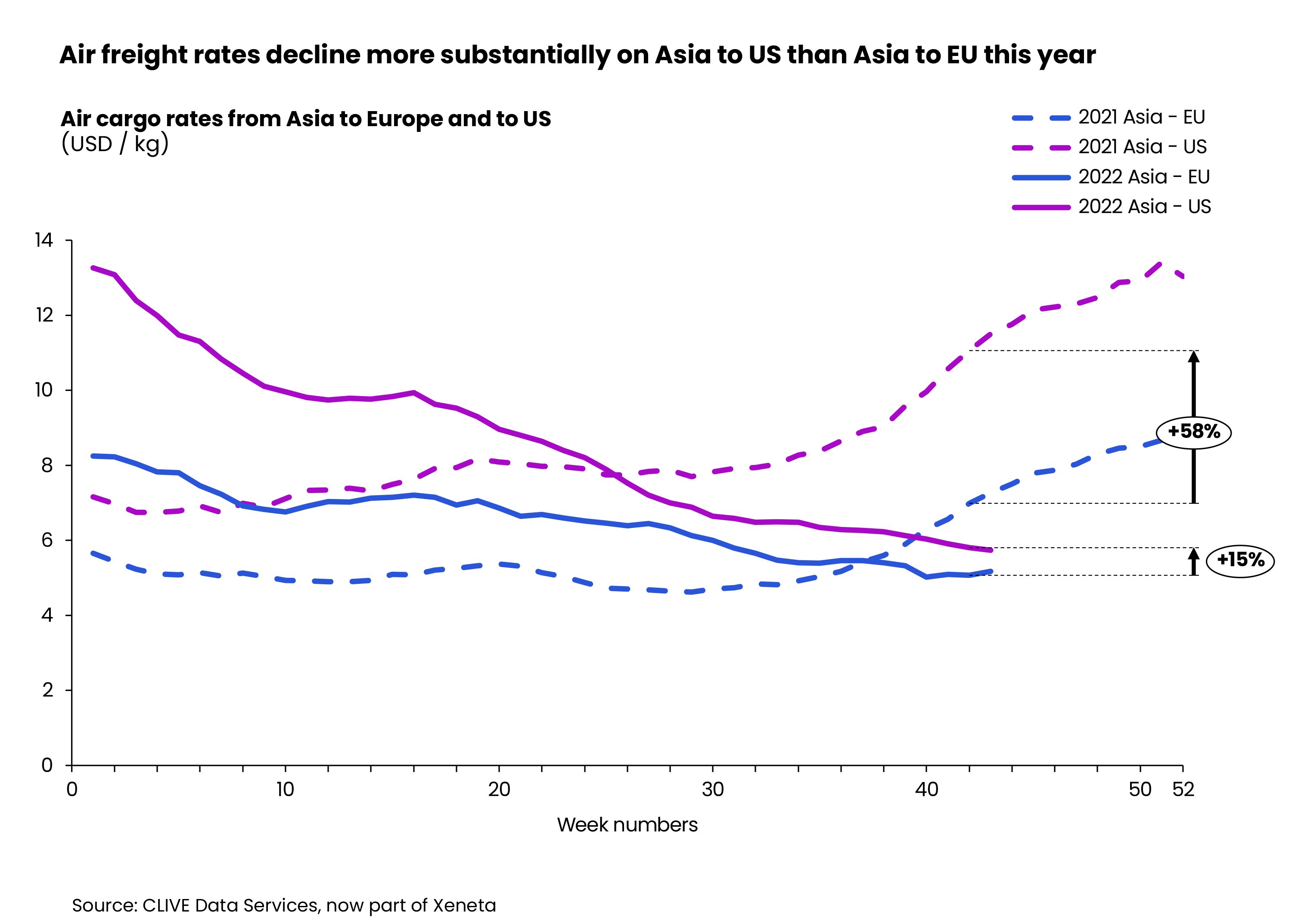 “On the supply side, the opposite is true. People are becoming more comfortable about flying again, and routes are opening up, leading to a rise in belly capacity, and the freighters being ordered and cargo conversions will also be coming to the market. The only development I can see that would slow down the decline in rates is supply on the ground.

If airlines and cargo handling companies continue to struggle to hire people and remain short-staffed, then the bottlenecks will create upward pressure on rates because it will be difficult to get your goods through the value chain.”

Airfreight rates on top volume corridors from Asia to Europe and Asia to the US continued to fall in October, while general rates fell more substantially on inbound US corridor routes than inbound Europe. This is attributed to added costs for EU routes due to the closure of Russian airspace and lower spending by US consumers.

Europe to US airfreight spot rates stood at USD 3.11 per kg in October, down 27% from the 2021 level, while Asia to Europe spot rates fell USD 5.09 per kg, down 25% year-over-year. Asia to the US registered the sharpest decline among the three top volume corridors, with the average spot rate down 45% from October last year to USD 5.87 per kg.

In comparison, the Latin America to US corridor showed more resilience to market headwinds, although its airfreight spot rate slid 11% to USD 1.38 per kg in October.

Shippers, however, may not be seeing long-term gains from falling airfreight rates right away, Niall van de Wouw says: “There is a lot of uncertainty, so this is not a period where shippers will get an ‘attractive’ deal for the next year or two years, they will get lower rates for the next one to two quarters, but who knows what will happen beyond that.”

Xeneta is the leading ocean and air freight rate benchmarking and market analytics platform transforming the shipping and logistics industry. Xeneta’s powerful reporting and analytics platform provides liner-shipping stakeholders the data they need to understand current and historical market behavior – reporting live on market average and low/high movements for both short and long-term contracts. Xeneta’s data is comprised of over 300 million contracted container and air freight rates and covers over 160,000 global trade routes. Xeneta is a privately held company with headquarters in Oslo, Norway and regional offices in New York and Hamburg. To learn more, please visit www.xeneta.com

In January 2022, CLIVE was acquired by Xeneta, the leading ocean and air freight rate benchmarking, market analytics platform and container shipping index, to provide the most timely and comprehensive insights into the global ocean and air freight markets. To learn more please visit www.xeneta.com