[ON-DEMAND AIR WEBINAR] October 2022 | Should you be negotiating short-term or long-term contracts?

After a short hiatus, the Xeneta State of the Air Market webinar series is back to take a deep dive into the changes, trends, and global economic factors that impact the air freight market today. Is demand high or low? Are all routes running as normal? Should you be negotiating short-term or long-term contracts?

Join Niall van de Wouw, Chief Air Freight Officer at Xeneta, and Wenwen Zhang, Air Freight Analyst at Xeneta, as they explore both macro and micro economic factors and learn which lanes are experiencing the biggest disruptions and how it will affect your air freight rates in Q4 and beyond.

The global cargo volume, measured by the chargeable weight, has also fallen below last year and the pre-pandemic levels, which could be explained by consumer behavior, switching from products to services, and the recent heightened commodity prices.

The cargo capacity is now 5% above last year's level, however, when compared to the 2019 level, we can still see a negative trend for capacity. For the past half year, the capacity increase is mainly benefited from the pent-up demand from the summer travels in the northern hemisphere.

The air cargo dynamic load factor, a measure of capacity utilization by considering both volume and weight, has now also fallen below 2019 and last year's levels.

Regarding freight rates, September marked the first month of this year, with spot rates falling below last year. Due to current capacity constraints in East Asia, labor shortage on the ground, inflation, rising jet fuel prices, and the continued war in Ukraine - we are seeing that the air freight spot rates remain 103% above the pre-pandemic levels.

Load factors across the Atlantic showed the highest decline. While explaining the most significant drop in load factors across the Atlantic relative to other lanes, Wenwen said that it is mainly due to the pent-up summer travels, because of which the capacity is returning to the pre-pandemic level. It is even 1.7% above the 2019 levels. We also see a similar trend on Europe to Latin America trade.

The Atlantic ocean schedule reliability ticked up from historic lows. We can also see that in the recent few months, the fall of the air freight rates again coincided with the slight uptick in the ocean schedule reliability. So the falling overseas demand seems to relieve port congestion, allowing some shippers to switch back to ocean mode. 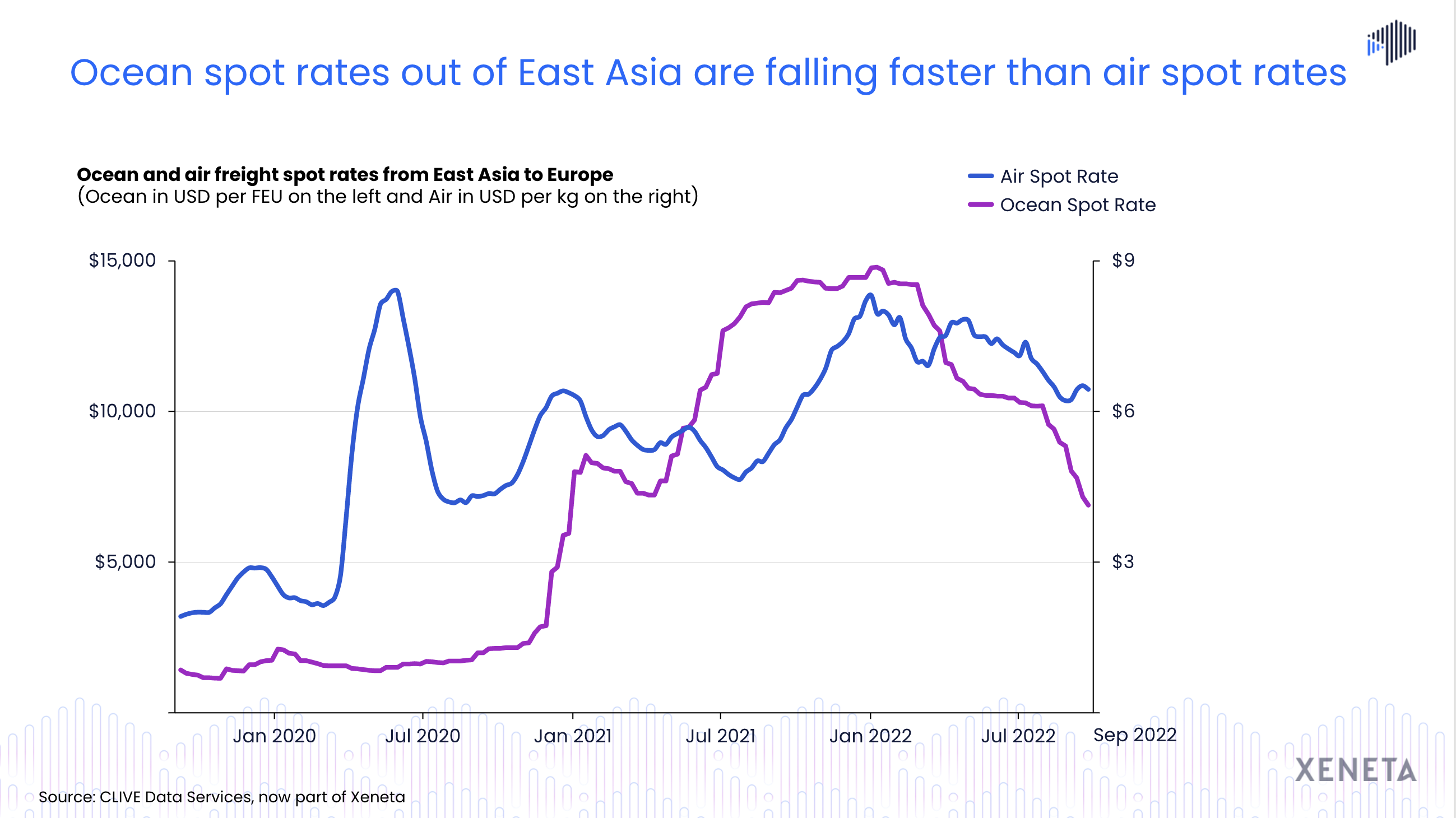 As the stay-at-home shopping spree kicked in around Q4 2020, the ocean spot rate had been climbing up until it peaked at the beginning of this year. During the summer peak season this year, we saw that customer demand was not strong enough to push out the ocean freight rates, and in September, the ocean freight rates fell a sharp 49% from their January peak. The air market also shows a very similar trend to the ocean market.

Air freight spot rates between the airlines and forwarders have also been falling since the January peak, but we see that it had a less drastic fall compared to ocean freight. This could be due to the Russian Ukrainian War, which has been dragging on with re-routed flights adding extra cost to the air freight rates.

Our data also reflect that the current rate levels on Europe to US corridor are already below the last two years. However, we see that the current spot rates for East Asia to Europe are still very high and 7% above the previous year's level. 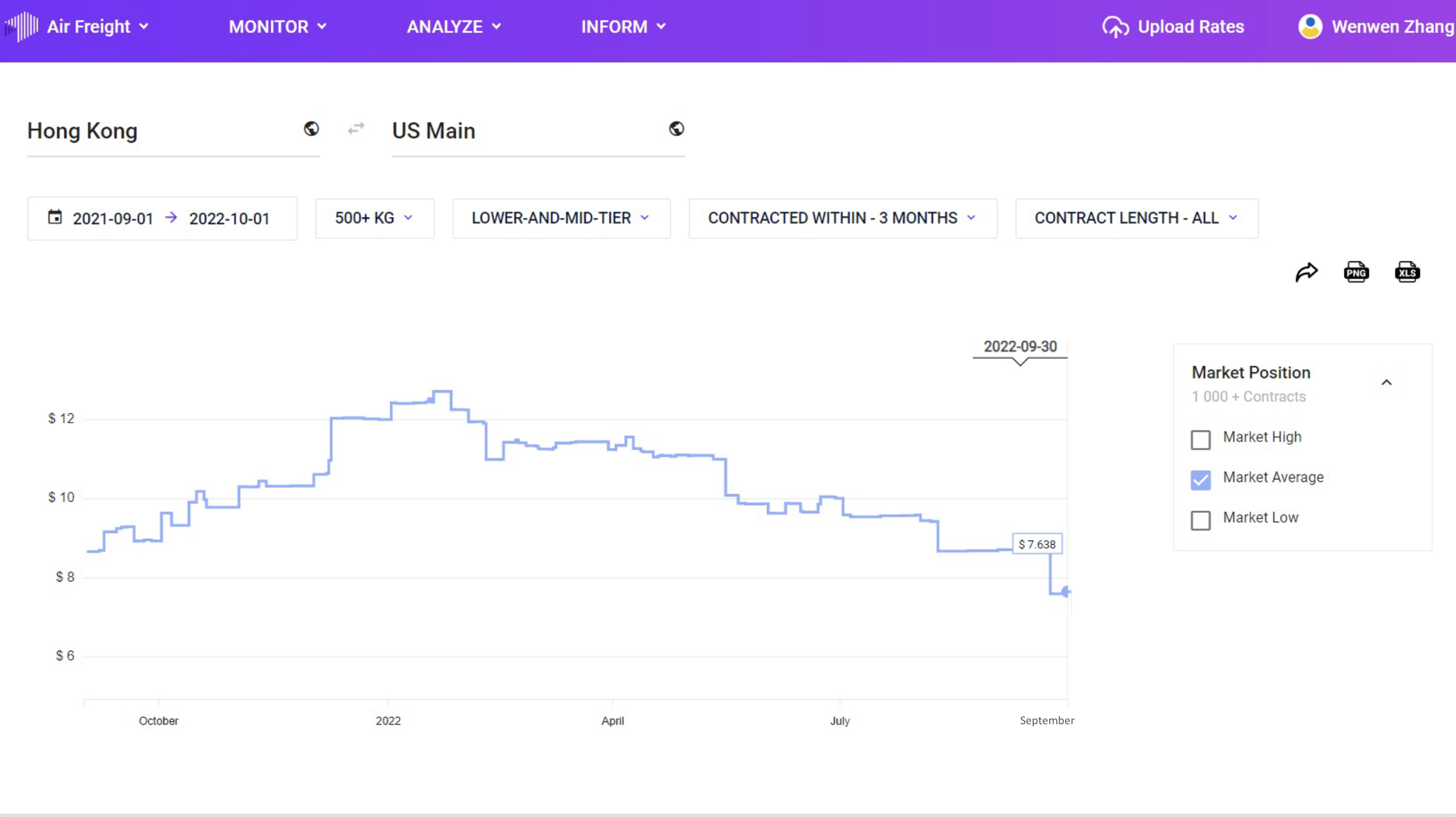 While looking at the outbound Hong Kong to the US Mainland air freight prices in the Xeneta platform, Wenwen also discussed the trend for the non-expedited lower and mid-tier service in the 500 kg plus weight break for the last three months.

Similar to the airline pricing, the air freight rates between the freight forwarders and the shippers also plateaued earlier this year, but unlike inbound Europe trades, the war in Ukraine did not have much of an impact on the air freight prices between Hong Kong to the US. By the end of September, rates fell just below eight dollars per kg for the first time in the past 12 months.

Join our upcoming  'State of the Market' webinar and learn how you can take a competitive stance in this weaker market using reliable market insight.

PS: Can't attend live? Sign up to receive the recording.