GRI Freight | To GRI or Not GRI? 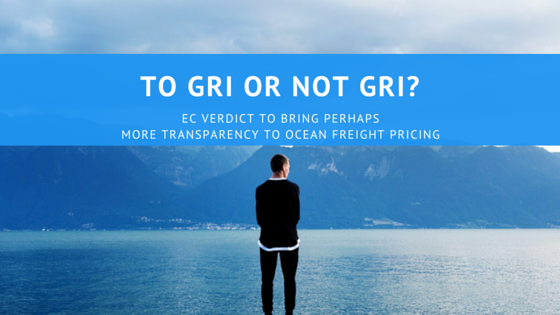 As you may have heard, a few weeks ago the EC closed its pricing investigation against 14 shipping lines moving cargo between Asia and the EU. This case was, naturally, interesting for us at Xeneta since we thrive on bringing ocean freight pricing visibility to the industry.

GRIs Didn’t Come to the Rescue

This was a five year EC investigation in which the carriers were accused of surreptitiously signaling price increases to each other via their very public GRI (General Rate Increases) announcements. In view of the staggering losses suffered by the very same carriers during the final three years being investigated, these would have been perhaps one of the worst-coordinated and ineffective price hikes in modern history.

In the real world, where bureaucrats fear to tread, the carriers have only earned a profit during one year of the EC’s investigation. Losses are so extreme that the European Central Bank recently began to review shipping loans; they want banks to increase their provisions for bad debt for both bulk and GRI container carriers. Recently Reuters reported that Deutsche Bank AG is seeking to sell at least $1 billion of shipping loans amid increased scrutiny over their exposure to the troubled shipping industry.

At issue were the quarterly GRI’s, the mechanism by which for decades the carriers have announced rate increases, decreases, or no changes. GRI’s date back to the days of conference and non-conference line shipping, and were based on the supply & demand ratio of available cargo to available freight space.

A Whimpering Close for GRI Shipping

Not surprisingly, the EC was unable to prove that GRI’s boosted carrier profits, as Zim, Cosco, HMM, UASC, Hanjin, CSCL, and others were likely anxious to testify. They might have also testified that paying the massive fines resulting in an antitrust conviction when they were losing hundreds of millions of dollars could have bankrupted several of the carriers.

The investigation ended ‘not with a bang, but with a whimper,’ as the carriers solemnly promised to “stop publishing and communicating GRI announcements” However the EC permitted them to continue publishing GRI’s so long as they are all-inclusive maximum rates for the lane, and the announcements are not made more than 31 days before their implementation.

Years of staggering losses prove there was no collusion. Boxes are priced based on the actual rates reported on platforms like Xeneta’s, instead of a hoped-for General Rate Increase. GRI container rates continue to be based on supply-demand of container vs. cargo dynamics.

Of course this may change given what is happening in current politics in the U.S in regards to trade. There are storm warnings on the horizon, and all of us involved in trade, even the EC, need to concentrate if we are to muddle through.

Ocean Freight Prices | To GRI or Not GRI? from Xeneta