With carriers having bled a record amount of money in 2016, there is really only one way the market can go in 2017. Last year saw record low prices. We would think that the market couldn't get any worse and that it just has to recover this year. However, it's not that simple. We still have to question everything. When looking at 2 weeks post Chinese New Year (CNY) 2016 (week starting February 22), we saw an average drop of about 29% on the China Main ports-North Europe main ports corridor for a 40’ container. This year, 2 weeks post CNY (week starting February 13) though still a drop, that same corridor (40’ container) saw only an average drop of 11%.

Ending this week we see market average prices at USD1761 (Feb 23) for the corridor.

On the trans-Pacific looking at China Main ports - North America West Coast ports, 2 weeks post CNY 2016 (week starting February 22), we saw an average drop of about 13% for a 40’ container. This year, 2 weeks post CNY (week starting February 13) though still a drop, that same corridor (40’ container) saw only an average drop of 11%.

However, we should note that despite the decline this year, the prices today are still at a higher level than this same time in 2016.

If we look at the average prices Post CNY from 2014-2017, it's clear that this year's ocean freight prices are inching up to 2015 prices. What's more interesting is that if, and that is a big IF, the market remains as healthy for suppliers, container rates can possibly reach 2014 levels. 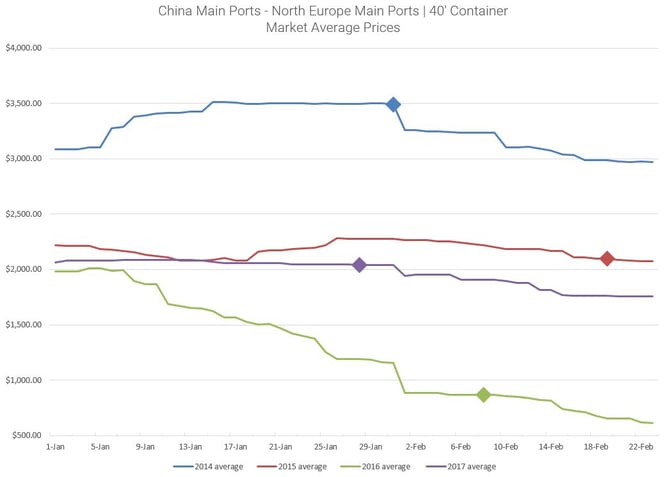 We reported a couple of weeks ago that some carriers were pulling capacity to keep the market at a higher level once the lunar holiday concluded. This could be indeed one of the many "smarter" mechanisms they are using to make sure things don't plummet like it did last year. Although, you can argue that carriers have done this every year.

With a majority of the focus on the Asia – Europe and trans-Pacific corridors, the true winner so far has been slightly forgotten. The China to South America corridor has recovered amazingly in 2017 with an increase of approximately 200% year on year.

The market average price increase of 200% is a solid foundation for carriers to begin cutting their losses in this corridor and start the move to positive numbers. This is by far the best market for shipping carriers to make money instead of handing away money.

In all honesty, the past 12+ months saw shipping lines subsidizing their customers (BCOs) to move their cargo, which led to subsidies to consumers allowing BCOs to either pocket the money or push the savings down to the end consumer.

Maersk’s acquisition of Hamburg Süd will give them a 70% market share mainly on reefers on the South America to Europe corridor. This is good news for Maersk as they very well will control the majority of that market and will have the upper hand in contract negotiations. It perhaps is not that good news for shippers.

Long-Term Contracts Pulling the Market Up

Europe negotiations were postponed by many companies last year in an attempt to see what the effects of Chinese New Year would be.  As many of these contracts are being concluded, we see a substantial increase in long-term contract rates (Asia - Europe)  when compared to the same cycle last year.

American companies are entering negotiations in the spring and summer months. All eyes should be on May and beyond as the ocean freight contracts signed last year at low prices will be expiring giving the carriers the upper hand when new contracts come into play. This will undoubtedly keep pulling the market up as it is anticipated that the higher contracts being seen on the Asia-Europe corridor will apply for the trans-Pacific as well.

I can't stress enough that although 2017's ocean freight rates have all the signs that they are improving, we can never be too sure. Overcapacity is still an issue that hasn't been dealt with 100% even though there are a record number of ships being scrapped.

We should also be on the look out for any new or daring liners who want to make a play in the market, and by doing so may drop prices to gain market share.  All eyes should be on the near future contract negotiations because if any liner starts agreeing low long-term contract prices now, that would be a catalyst to pull down the spot market as well. Then, it could all start all over again and we may relive 2016.

Why Long-Term Freight Rates Are Declining
Read more
The US East Coast: Open for Mega Business
Read more
The Biggest Stories From the Global Shipping Industry in 2017 (Part 2)
Read more