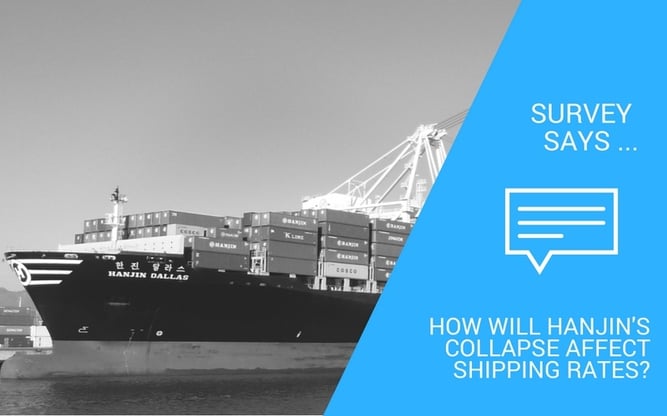 Hanjin's big bump in the road has made for some interesting reading and writing for bloggers and press. As a company focused on the ups and downs of ocean freight rates, we can only but speculate what effect Hanjin's drama can have on prices. So, naturally we went to our community to check the overall feeling on the topic.

We asked the social media community their thoughts on how Hanjin’s collapse will affect ocean shipping rates. 50% of the respondents indicated that rates would indeed go up while 36% did not expect any change. A small percentage, 7%, expects a decline while another 7% of respondents were not sure.

Container Lines Come to the Rescue

As the news of Hanjin’s collapse sunk in, spot rates settled down the following week barely inching upwards for Asia to US West Coast and East Coasts. According to the Journal of Commerce, this may indicate that US importers are finding space on other carriers during peak season. Indeed, Maersk announced that it would open a new service from Asia to the US west coast to “soak up” Hanjin’s customers. Similarly, MSC announced the introduction of a new transpacific service called Maple which will start on September 15.

According to Maersk, it is seeing a short-term rise in freight rates and new clients after the collapse of Hanjin Shipping Co. “The question is what will happen with the rates in the longer term. In the short term, the effect is positive, but there are many factors that can influence rates in the medium and in the long term.” A company representative said.

Indeed, as the Journal of Commerce noted, the Chinese New Year holiday is January 28th so not only could vessel space tighten more in the next month or so but rates could likely increase even more as retailers look to book space before Asian factories close during the Chinese New Year festivities.

What will the Hanjin Shipping Co. collapse mean for the ocean freight market? Will rates eventually stabilize? What does it all mean for shippers? Share your thoughts on our LinkedIn page.

Learn how the Xeneta platform can help you stay on top of the shipping market prices in real time and on demand. Download our  webinar to learn how Xeneta can help you benchmark your ocean freight rates and get intelligent data to optimize your logistics and supply chain management.