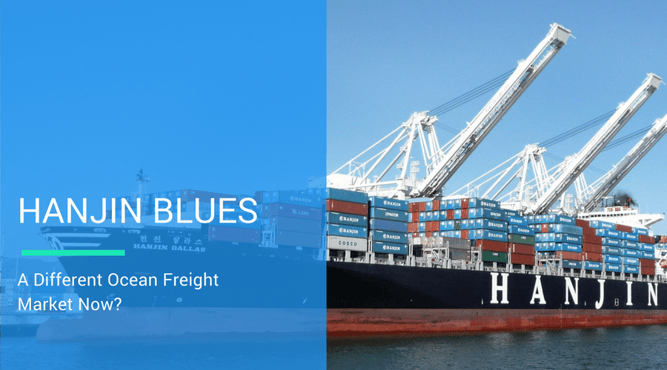 We're a few business days past the Hanjin bankruptcy and the shipping market has changed 180'. The ramifications extend far beyond the dry legal negotiations of the courtroom; we're now looking at drastically reduced retail inventories for the Christmas season which affect the amount of retail sales hiring, and subsequent corporate profits. South Korea is equally affected, as the thousands of containers carrying (not now!) electronic products from Samsung and LG will affect the country's trade balance and foreign exchange reserves.

Three Hanjin ships are reported arrested (in Long Beach, Shanghai and Singapore), with another 44 of their 98 vessels refused entry at ports worldwide (including such major ports as Shanghai, Hamburg, Long Beach, and Sydney), putting forwarders, manufacturers, and traders at risk for their cargoes, while 36-51% spikes in ocean freight promise record losses once their containers are located, released, and eventually re-shipped.

Not a Surprising Demise

The demise of a major carrier was no surprise; three years of dropping ocean freight rates resulted in losses estimated in the $ 16 billion range; with the majority of the carriers except Maersk and Hapag-Lloyd not regularly offering financial results, one must look at the forced Cosco-CSCL merger, the Zim restructuring, or the rapidly-arranged Hapag-UASC merger to understand the severity of the bleeding.

The carriers also bear some responsibility for Hanjin's demise. While Maersk's Triple was an important step in the evolution of container ships, Maersk had both the customers and the financing to make them financially viable. However with UASC and others quickly engaging to also follow suit; there are now 104 mega's in-service or due to be delivered in the next 18 months – as the Chinese economy collapsed in 2014-2015.

Let's not forget Hanjin leased the majority of their containers from likely Triton, Textainer, Tal, and others. As Hanjin defaulted on its vessel contracts (US $ 18.6 million-Seaspan); the likelihood is the debt for these containers will be litigated before the containers – and their cargoes – are released.

For all this to happen in a world economy as thinly-balanced as today's, these consequences have the potential to be catastrophic. Let's see how things unfold.

Learn how the Xeneta platform can help you stay on top of the shipping market prices in real time and on demand. Download our  webinar to learn how Xeneta can help you benchmark your ocean freight rates and get intelligent data to optimize your logistics and supply chain management.