This year the US trades have been dominated by the tit-for-tat trade war with China that have contributed to a significant increase in rates, however 2018 didn’t get off to the best start. In this part-2 blog post, Xeneta looks back over the last 12 months to highlight key developments in the Far East - US West Coast trade.

Those operating on the Far East - US West Coast (USWC) trade saw rates in Jan-18 30.5% lower than the same period of 2017. They then developed in an unspectacular fashion, declining as they usually do in the run up to Chinese New Year and thereby remaining below the same period a year earlier.

However, the FE - USWC trade showed some positive signals. In Apr-18 rates increased at a faster pace than the previous year, a trend that has continued, and therefore rates began to claw back some of the yearly losses. But it wasn’t until Jun-18 that rates surpassed the equivalent month of 2017. As a result, for the first six months of the year, they were 18.2% lower than 2017. 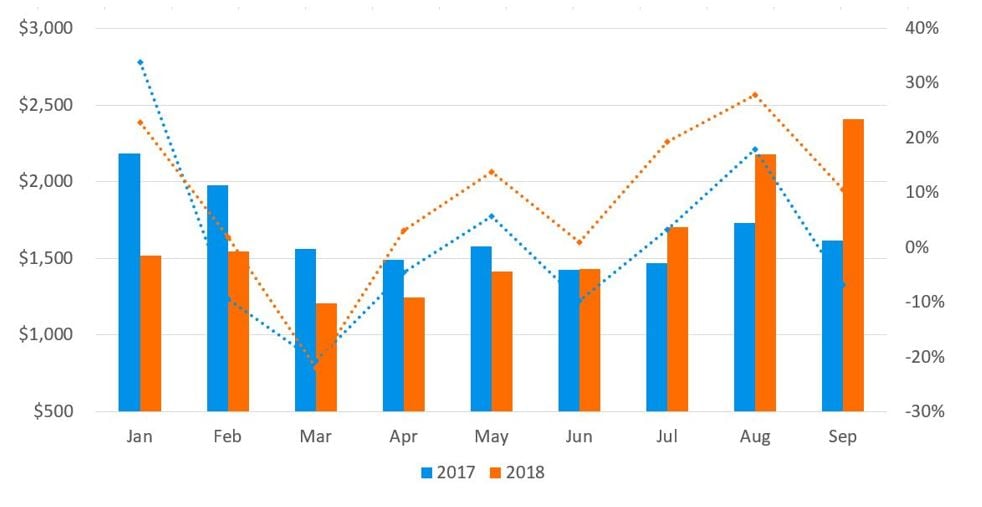 Note: Rates started 2018 at levels lower than the previous year but have seen more positive month-on-month developments, helping to take them to levels not recorded since early 2015.

While month-on-month rate developments were mostly better than those recorded during 2017, they only started to significantly improve once President Trump announced plans to impose trade tariffs on $50 billion worth of Chinese imports, starting in Jul-18.

The increases didn’t stop there, with rates jumping 27.8% in Aug-18 to $2,179 FEU. A further round of tariffs starting in Sep-18, added yet more uncertainty to the trade and the result was an average spot rate of $2,409 FEU, which represents a level not recorded since early 2015 and a 40.7% premium to rates recorded in Jun-18.

While rates have developed positively for carriers, the trade war masks like-for-like rate developments, making it harder to determine underlying market fundamentals. For example, will demand wither and rates tumble once shipments rushed forward to beat the tariffs begin to die down? Or will continued uncertainty lead to even more increases?

Regardless of the fundamentals, carriers will push home the opportunity to improve revenue streams.

Note: The spread between the market average short and long has declined since Jul-18 in line with increases in the spot market. Therefore, those on contracted rates have been able to negate some of the latest increases.

Time will tell whether recent developments represent a short-term market reaction to the measures imposed by Trump. However, these increases have begun flowing through to contracted rates. Although increases for long-term contracts have been less severe, those entering long term deals most recently still paid a substantial uplift compared to those negotiated just 3-4 months earlier.

The true long-term impact of the tariffs is hard to determine, but Fig 2 indicates the market is prepared to pay an increase for contracted rates to remove the continued uncertainty and risk surrounding the spot market.

In other key developments, a malware attack on Cosco in Jul-18, which affected its US services, reduced it to communicate with customers via social media highlights the growing importance of cyber security within the sector.

While the effects on Cosco were far less damaging than those Maersk reported due to the infamous NotPetya attack in 2017, it serves as a stark reminder to industry players that might be struggling financially, that failing to invest in cyber security could lead to dire consequences.

Make sure to check out our Resource center, which includes quarterly review rates webinars, best practices webinars, whitepapers, ebooks and other assets meant to accelerate your knowledge of ocean freight procurement.