Carrier Profit: What’s Ocean Container Shipping Really in for in 2018?

Depending on how you look at it, ocean container shipping has seen a major change since the summer of 2016. The new shipping alliances have started to mobilize in 2017 and the volatility of rates for all the major trade lanes is nothing short of unnoticeable. Blank sailings, GRIs, drop in rates. Will it be a buyer’s or seller’s market? What is on the horizon? Let's not call the doom for carriers and complete plummet of the market too soon. It's still early.

The box carrier world is far different post-Hanjin. We’ve got the 2M Alliance (plus HMM), THE Alliance, and the Ocean Alliance. Cosco and CSCL have merged, Zim has shrunk to regional carrier status, while the three Japanese lines are merging into the Ocean Network Express (ONE). And while MSC and CMA CGM, the world’s second and third largest box lines, are reportedly building ships with a capacity of 23,500 TEU’s, last month UNCTAD issued a warning that the box lines needed to be wary of collusion and price-gouging.

There are already some 155 ships with 594,000 TEU’s mothballed; adding any of Maersk’s 800,000 TEU’s to this total just adds to the glut of TEU’s that keep the freight market from rallying.

We shouldn’t forget the role of China in container shipping and profits these days. The bigger new-builds are being constructed in Chinese yards supported by Chinese export financing, and then sold to the huge Chinese leasing companies. Chinese government financing is the lynchpin to the entire system. They may continue to provide the cheap financing necessary for new ships to be chartered to Chinese companies in order to keep freight rates low on both their imports and exports.

This leads to revenue that’s marginally able to repay construction costs and debt service, which plays into the hands of those Chinese leasing companies whose vessels carry China’s exports and imports worldwide. Private companies, no matter how well managed, will have trouble competing with someone who can emphasize market share over profits.

To put things in perspective, let’s look at the recent rates development on the major trade lanes.

Looking at the spot market rates in Xeneta, for November 2017 compared to a year earlier on key routes, they were substantially lower than a year earlier. China Main Ports-North America East Coast short-term average rates for a 40’ container on November 20 were down 16% year-on-year. The ‘market low’ was approximately 25% lower year-on-year.

Comparing the same dates as above, the China Main-North America West Coast trade, the market average per 40’ container was down 23% and the ‘market low’ was 28% lower.

However on Asia-Europe, rates were holding up better, with China Main-North Europe market averages per 40’ container 12% lower than a year earlier, although the ‘market low’ was just 1% lower. 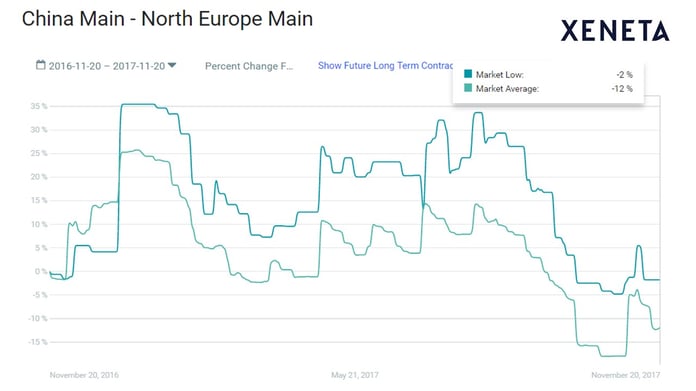 Although rates are lower, if you look at the overall trend, shipping lines are still going into the year end on a much healthier market compared to a year ago - both for short and long-term markets.

From the carrier point of view, there is still time to increase rates, but regardless of whether this happens, I’d argue that the most important thing would be to avoid the market plummeting down much more than what we’ve already seen from summer until now. Indeed, we can’t avoid noticing that many of the blank sailing maneuvers and even recent GRIs have not yielded an increase in rates.

In Xeneta, for the China-North Europe route there are already newly negotiated long-term contracts for 2018 contracted below the 2017 peak, but this is still more than the double of the lowest average point we recorded in 2016, meaning that 2018 contracts can be be healthy for carriers.

In addition, our customers are already contracting 2018 rates and populating data in our platform. Here we already see plenty of long-term contracts committed throughout the full year of 2018 at double the low point of 2016.

If the market holds for the next couple of months or so, contract negotiations for 2018 will still come into play from a quite healthy carrier market. Again, although the rates are looking lower right now, it is too short sighted to say the 2018 market will be unhealthy. With many carriers reporting profit and also from the trend we see in our data, we have to put things in perspective and not call it too soon. Let’s see what happens.

Changing Shipping Supplier: What Makes A Shipper Switch?
Read more
Supply Chain: What to Expect in 2030?
Read more
Play Nice: What is the Cost of Poor Supplier Relationships?
Read more