In the two weeks from September 26 to October 9 (weeks 39 – 40), global air cargo demand, measured in chargeable weight, rose 4.1% compared to the first two weeks of September. However, compared to last year, it was down by 6.9% and 2.4% below the corresponding two weeks in 2019.

Economic headwinds, such as rising inflation, higher interest rates, jet fuel prices and shifting consumer behavior, have led global air cargo demand to drop 2.4% year-to-date from 2021 and is now down 0.3% compared to 2019.

The dynamic load factor, which measures aircraft capacity utilization considering both weight and volume, dropped 5.7 percentage points in weeks 39 and 40 compared to 2021 and, in fact, returned to its pre-Covid level since this May. 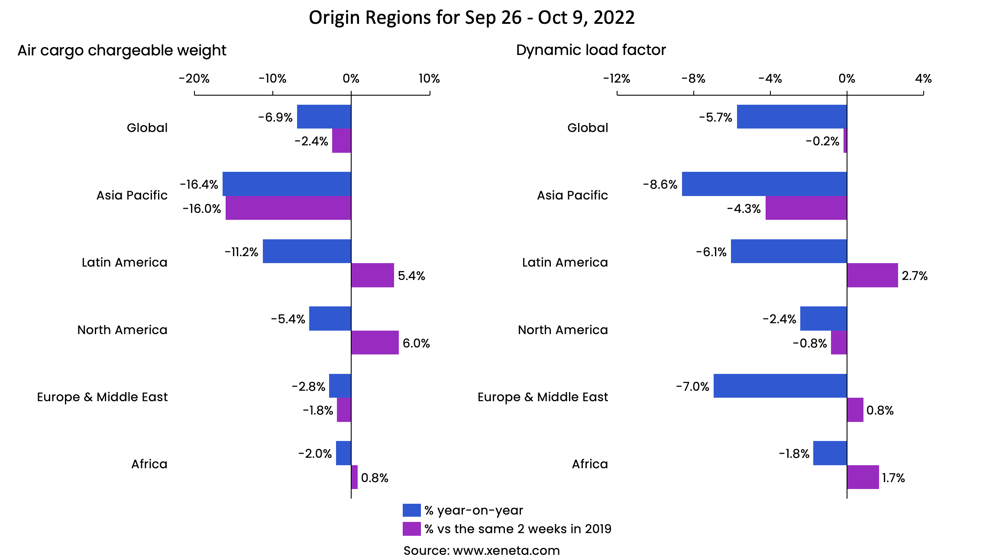 The Asia Pacific region was hit hardest by the fall in air cargo demand. In the two weeks ending on October 9, outbound Asia Pacific air cargo demand contrasted sharply, down 16.4% year over year and 16.0% from 2019.
Southeast Asia led the decline in air cargo exports in the Asia Pacific region, down 19.9% year-to-date. However, as it grew from a lower base, Southeast Asia air exports had the smallest fall of 2.8% compared to the 2019 level. The biggest decline compared to 2019 levels comes from Northeast Asia (excluding China), which was down 12.8%.

Dynamic load factor for the outbound Asia Pacific stood at 69.7% in the two weeks ending on October 9. Although it remains the highest among other origins, the load factor fell compared to the same two weeks a year ago and the pre-pandemic level.

The current fall in the load factor is attributed to the gradually increased capacity and a fall in air cargo demand. Compared to air freight boom years 2018 and 2021, this year’s peak season is yet to come, so far delayed by two weeks from normal seasonality, with the delay increasing as we wait for signs of a peak season pickup in demand.

After the Asia Pacific, air cargo exports from Latin America origins were the second most affected. It was down 11.2% year-over-year in the two weeks from September 26 to October 9. However, air cargo exports maintained a positive trend of 1.5% year-to-date compared to last year and a considerable 14.5% over the 2019 level.
In comparison, the load factor was only down 6.1 percentage points year-over-year in the same two weeks, thanks to active capacity management by airlines.

Europe and the Middle East

Africa achieved the lowest year-over-year decline (-2.0%) in air cargo exports from September 26 to October 9. Compared to the 2019 level, Africa had a positive 0.8% growth in these two weeks.
The load factor for outbound Africa was the lowest among all regions. It stood at 46.2% in the above-mentioned two weeks time period.

Watch the latest episode of our monthly State of the Market Webinar for air freight rates to see where you stand in the volatile markets. If you have any questions, please send them to info@xeneta.com. 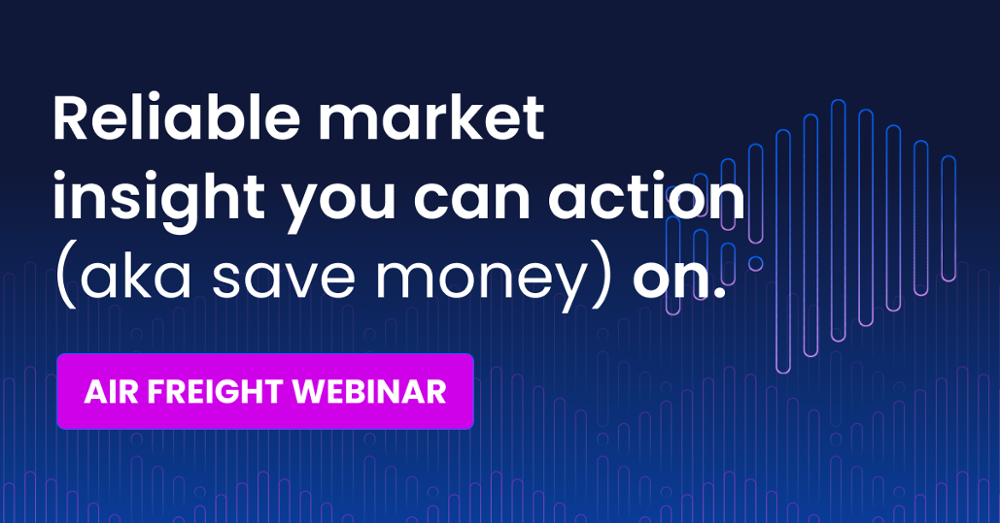