Can We Pull the Plug on the Trans-Pacific Partnership?

The TPP is a hot topic with varying opinions in the U.S. While it’s not uncommon for congress to get a bit wishy-washy when it comes to global policies, the TPP, in particular, has proven to be a considerable thorn in the side. Here is another piece on things to consider when it comes to the TPP.

While designed with the idea of balancing global trade and wrangling China into the World Trade Organization, it’s not without some considerable flaws.The T.P.P. has left quite a number of Americans with a sour taste in their mouth. Much like the induction of NAFTA, which was aimed to stabilize Mexico’s economy, the T.P.P. poses a considerable threat to a number of jobs in the United States. According to Nick Florko at Citizen’s Global Trade Watch, more than 57,000 U.S. manufacturing facilities have closed and five million U.S. manufacturing jobs –one in four– were lost.

“It's my job as a United States Senator from Pennsylvania to fight for Pennsylvania jobs. In the decade after NAFTA was passed, 525,094 workers were certified as displaced, and a 2014 study found that job displacement due to trade led to real wage losses of 12-17% 1984 through 2002. Thousands of Pennsylvania jobs have been shipped overseas because of unfair trade practices and outsourcing,” according to Pennsylvania Senator, Robert Casey. 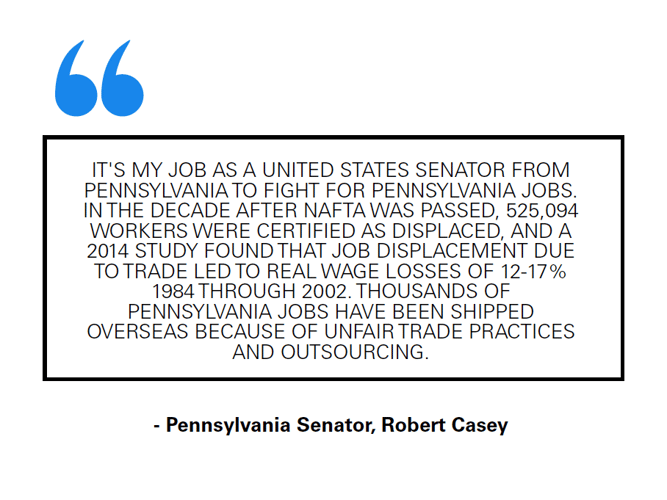 The matter of the TPP has also been something of a hot button topic for the U.S. presidential race. While Trump has outright trounced the plan, calling it a “horrible deal,” democratic hopeful, Clinton, has changed stance on the agreement from the past, no longer believing it to be in the best interest of the American people.

However, it might be beyond the reach of either nominee at this point. Ocean freight giant Maersk, for example, assumes that no matter how the U.S. presidential election ends, it probably “won’t have an effect on the contracts we have and the employment exposure we have in the U.S.,” Trond Westlie, Maersk’s CFO said, any steps in a more protectionist direction would clearly hurt global economic growth. “In general, trade barriers weaken global growth,” Westlie said in a phone interview. “Low trade barriers not only help trade growth, but also economic growth,” he added in his interview with Bloomberg.

No Turning Back Now

With all the feet stamping and sense of impending doom with the TPP lurking on the horizon, the question is, why not just pull the plug? While it would seem to be a prudent course of action, an article from the New York times explains why dropping the Trans-Pacific Partnership may be a bad idea.

“For strategic reasons alone, walking away may be a bad idea. China may not be in the Pacific trade deal, but the deal, to a large extent, is about China. If allowing it into the W.T.O. was about bringing it into the rules-based system, the Pacific trade deal establishes a ring of rules around it. It is a guarantee to China’s nervous neighbors of Washington’s commitment to the region and an effort to set standards for Asia’s economic integration,” writes Eduardo Porter, Economic journalists for the NYT. “Killing the deal would smack America’s Asian allies — such as Japan and Vietnam — as betrayal. China would love it.” 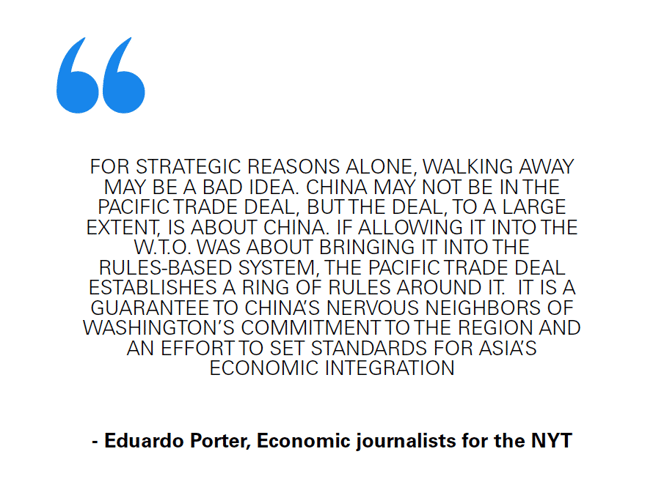 And true enough. China has risen to become an industrial giant in the global markets, but to date has managed to play by it’s own set of rules. While they aren’t actively a part of the T.P.P. which would help to regulate and level the playing field, the T.P.P. helps to create more equal footing for other Asian manufacturers.

“If the idea of retrenchment were to take hold and the T.P.P.. were to stop, it would be a blow to U.S. influence and credibility more broadly,” said Eswar Prasad, a professor of trade policy at Cornell. “If the United States can’t deliver, it’s going to hurt legitimacy and credibility. That is going to be a pretty big stain.”

Other Partnerships Lurking in the Background

“China is engaged in negotiations for another agreement that does not include the United States – the Regional Comprehensive Economic Partnership. Its members are the ASEAN nations, Australia, New Zealand, China, Japan, Korea and India. Seven countries have overlapping membership. Negotiations for the Regional Comprehensive Economic Partnership have been slow. But if the Trans-Pacific Partnership agreement stalls in the US Congress it's a safe bet that China will pull out all stops to complete its agreement with the region expeditiously,” according to Craig Emerson, a contributor for the the Australian Financial Review.

“In those circumstances, the United States would have been humiliated, its pivot into Asia a failure and China would announce a new national day of celebration as the dominant power in the Asia-Pacific region. That's what happens when trade policy is merged with foreign policy,” he added.

The United States will have to proceed carefully if they want to avoid having egg on their face. As to whether or not the ordeal is worth it, only time will tell.

Can We Pull the Plug on the Trans-Pacific Partnership? from Xeneta

Keep following our blog and make sure to subscribe on the top right, to get instant email updates everytime we post a new blog (2-3x's a week).