In academic terms, it’s Supply & Demand 101, but to everyone’s surprise, the shipper’s reduced demand to move containers has been more than offset by the carriers ability to manage container capacity. Who would imagine that as the US response to the Covid nightmare implodes in a fearsome increase in positive cases and deaths, that container rates would be rising?

Looking back to that ugly March-April-May timeframe when people thought they were watching the world economy collapse; industry stalwarts such as Blue Alpha Capital and Sea-Intelligence CEO Lars Jensen were forecasting potential carrier losses of US$ 25 billion, and multiple carrier bankruptcies. Fortunately, the EU lockdowns were effective, and with central banks (notably the US Federal Reserve) ‘helicoptering’ liquidity into the system and a global meltdown was averted.

Yet only months later, the carriers not only have maintained rate stability, but are demanding and receiving rollover premiums for not dropping previously contracted boxes. Container rates are staying up despite a drop in demand. What happened?

It’s important to note demand is clearly down, but not as much as feared.

But with the discipline of capacity management (the ‘supply’ of ships and box space); beginning in March the carriers cancelled loops, took advantage of the bunker price collapse by slow-steaming and shipping around the Cape of Good Hope, and then putting ships in hot lay-up status. In short; they reallocated their TEU’s per ship to the current demand for box space – and rates not only stayed current, but increased.

As the EU virus response was seemingly effective, business volumes are increasing as their economies slowly recover. The pre-virus carrier response might have been to slam a few 20,000 TEU vessels back into the loops; however the post-virus carrier response by THE Alliance was to add a single weekly voyage to the loop – of a vessel in the 6,000-10,000 TEU size. Additionally, our friends at The Loadstar reported last week how the 2M is adding a similar small weekly sweeper service instead of reinstituting it’s much larger AE2/Swan loop, and the Ocean Alliance will (currently) not suspend one of its loops.

This sort of measured response is most effective; headhaul utilization is in the high 90’s percentile.

Xeneta has recorded the rise in the spot market average rates into both the major EU and American West coast ports for a FEU: 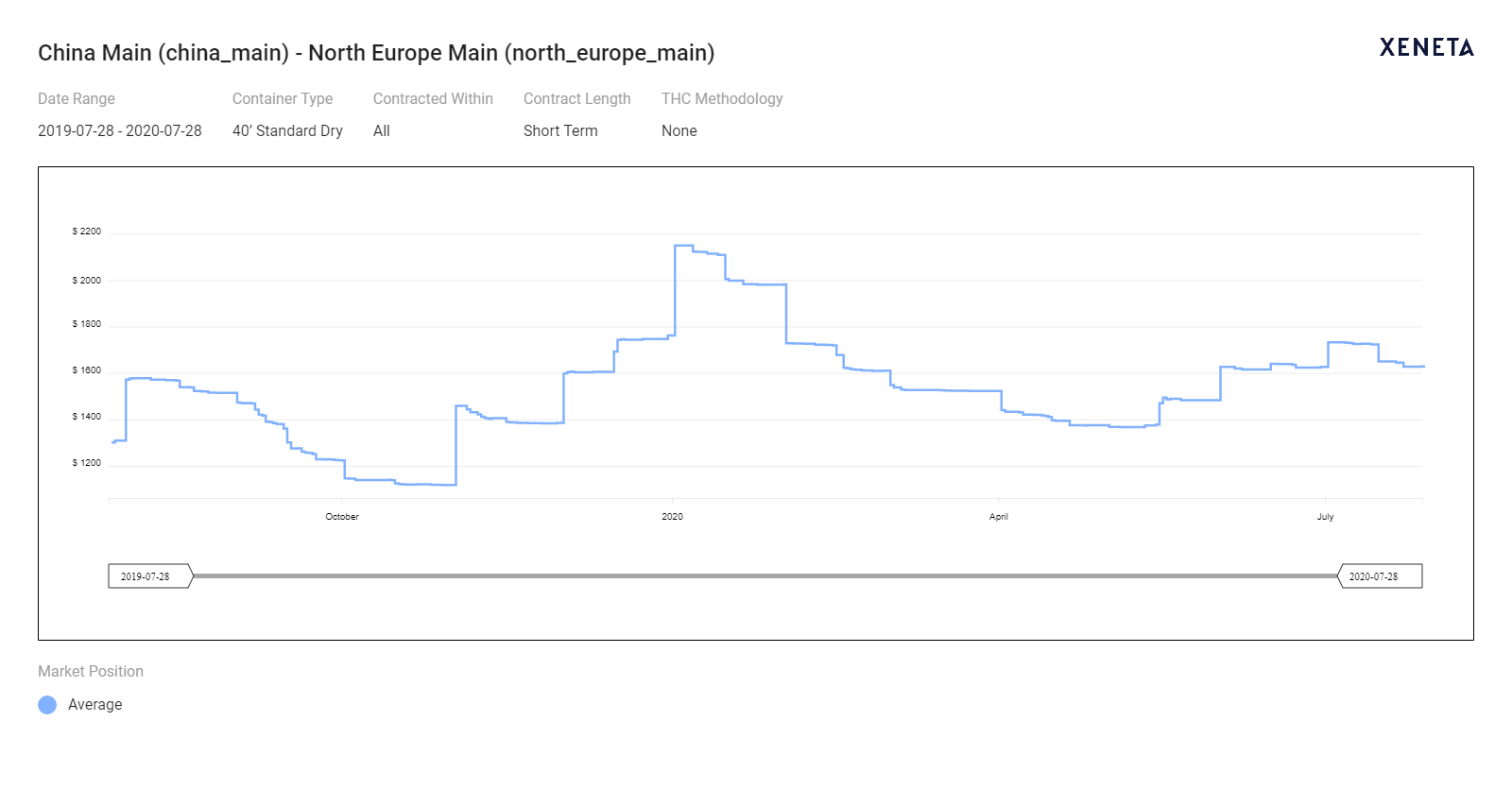 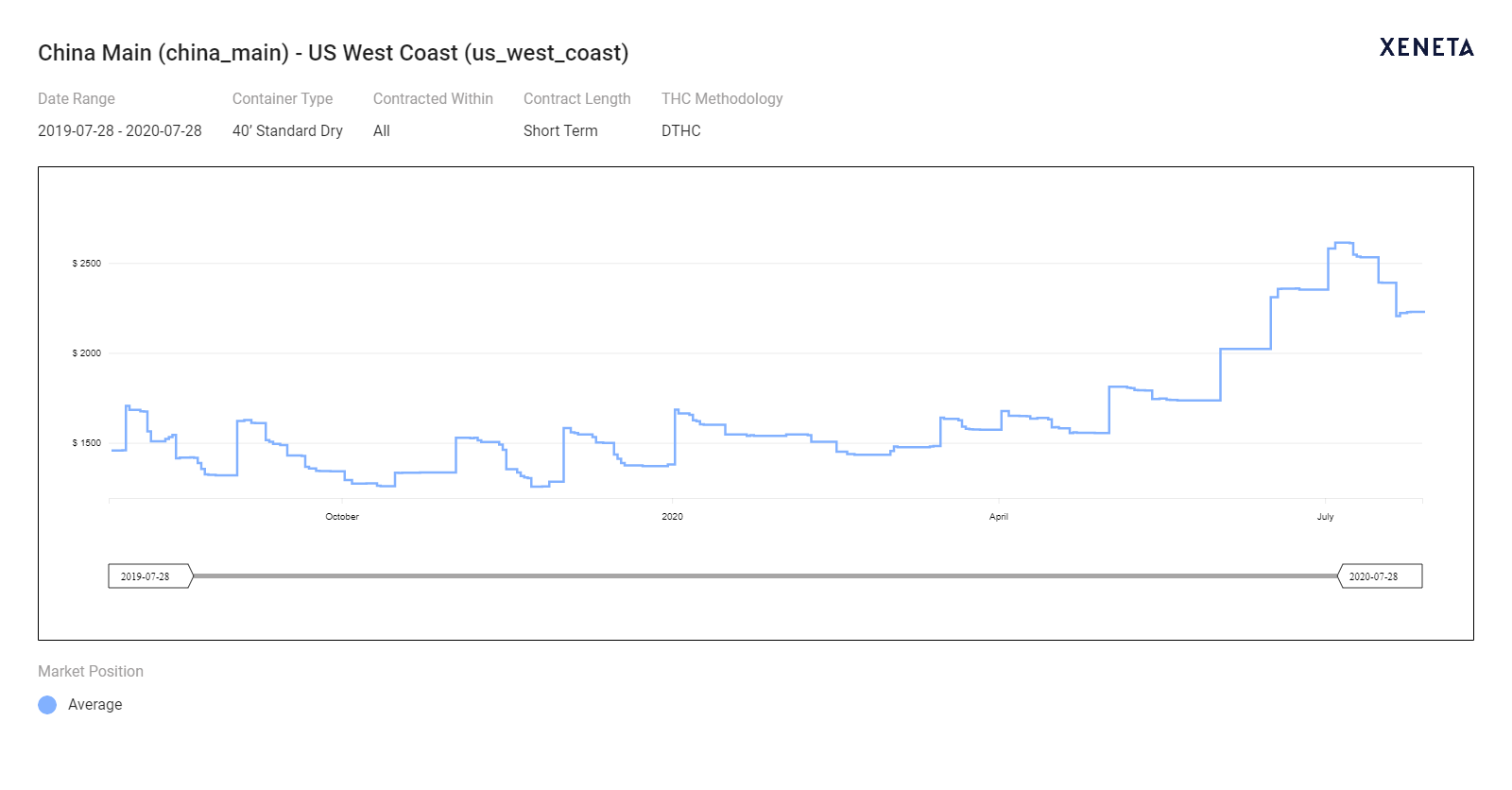 Vessels and capacity are being returned to service, but on a controlled, and as-needed basis as demand requires. This works smoothly on the Asia-Northern Europe loops which are improving, and also provides the carriers a safety net for the Asia- US market, where multiple states are debating how fully they need to mandate a lock-down.

Shippers will very likely accept GRI’s when the economy allows them to pass the increase along, and that happens when imports aren’t flooding the market, but GRI’s are easily rolled back when demand drops.

It’s easy to forget that supply & demand works both ways; we’re used to prices and rates falling as demand slows (too many imports flooding the market); it seems a rare occurrence when supply (carriers) is restricted and rates rise.